The Blamey Game…He Or She Stars For WA 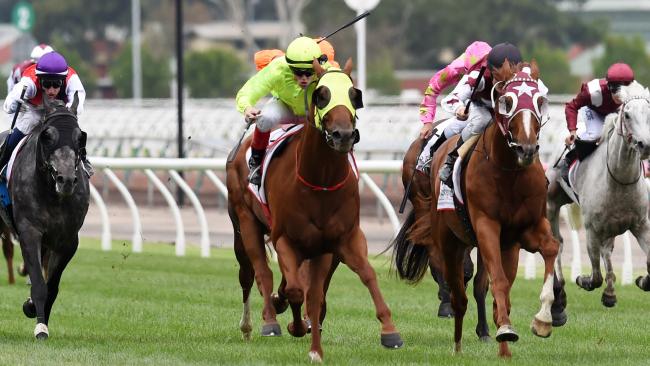 Super Saturday at Flemington is when all the stars come out to play: a champagne event with very little bread and butter among the silver service.

So, it was hardly surprising when the ambiguously named, He Or She, bullocked his way through to capture the Group Two Blamey Stakes, for David Hayes & Tom Dabernig, giving the former his fifth victory in the time honoured mile.

Yet while D. Hayes has more brand recognition than just about anyone in the thoroughbred industry, a few patrons were scratching their head about He Or She’s sire, Kendel Star.

Ah, what short memories we have. Kendel Star was a pretty handy miler in his day – admittedly back in the early 90s – and won nine races, interspersed by a career high second in the Group Two Bill Stutt at Moonee Valley.

A striking grey by another striking grey in Kenmare, Kendel Star ended up at stud in Queensland where it’s fairly safe to say that any stars of his own were few and far between, which is hardly surprising given that he covered just 11 mares during his final two springs in the northern state.

Enter Rivercrest Park Stud in Western Australia who were keen to give Kendel Star a crack at its Stratham property and have stood him for the past 14 years. And, from the sounds of it, will stand him until he stands no more.

Rivercrest’s owner Steve Hoare was understandably buoyant when contacted after the Blamey win, particularly as Kendel Star has produced only four stakes winners previously, none of which were further east than the Swan River.

Celebrating at the Bunbury Stakes meeting on Sunday, Hoare said:“What a terrific old horse he (Kendel Star) is. He’s rising 26, got glaucoma and is nearly blind in his near side eye. But boy is he tough: he just won’t lay down … like his progeny.

“We also have Due Sasso, God Is Spoken, Famous Roman and Black Tom at Rivercrest and while Kendel Star only covered 13 mares last season, he’s got 99% fertility. Amazing old bloke … a real bread and butter horse.”

Pointing out that he can probably slap some jam on that bread and butter – particularly if Hayes/Dabernig decide on a tilt at the Doncaster Handicap – Hoare added: “After watching He Or She win the Blamey, I went out to give Kendel Star a pat … he was never the most sociable of stallions but does love his pat. He’s mellowing with age.”

Mellowing maybe, but with He Or She on the rise, this Star doesn’t appear ready to go gently into that good night.