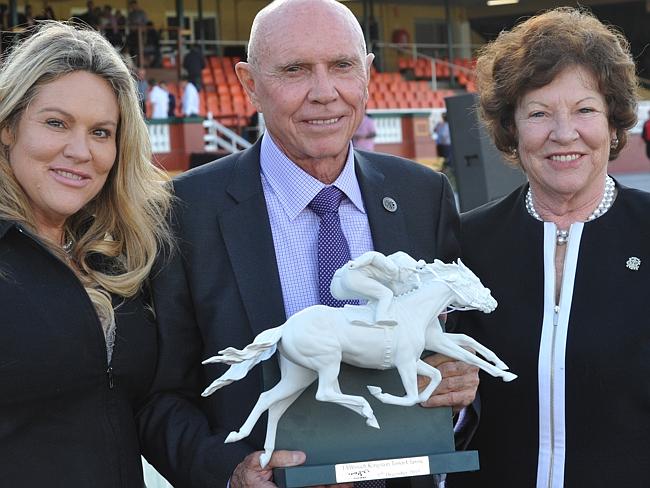 After Delicacy won her second Oaks and was on the way to her second Derby last season, her owner Bob Peters declared her the “strongest and toughest filly I’ve ever had”.

He might have added: “Except for the stronger and tougher one I’ve got at home”.

It has become a fact of racing life that for every wonderful filly Peters and his wife Sandra produce, another, even better one, is on the way.

Over the past few seasons such outstanding fillies as Elite Belle, Real Love and Real Charm have emerged in succession, only to drop back a notch when Delicacy arrived.

But the point might never have been better made than at Ascot last Saturday when Delicacy chased her successor, Perfect Reflection to the line in the Group 1 Kingston Town Classic.

“I thought we had it won when Perfect Reflection got to the front,” Peters said.

“Then Delicacy started coming, and I thought we had it won again.”

Perfect Reflection, whose sister Ideal Image and stablemate Arcadia Dream had all won on the same card, scored by a nose, helping to make it a typical summer’s day at the races for her owners.

Last December at the same track it had been the ill-fated Elite Belle who led in a four-timer for Peters-owned runners winning the Group 2 C B Cox Stakes while her stablemates Real Love, Shining Knight and Real Charm all won stakes races.

Together they were part of a summer carnival in which the Peters won nearly everything on offer in the West, finishing the season with 26 stakes wins, all with horses they bred themselves.

Only Darley, with 29, bred more stakes winners in Australia.

It would be easy to think that there is something of the big-fish-small-pond scenario about the Peters’ presence in Western Australian racing.

But that would be a cynical view.

Bob and Sandra Peters have been racing horses for 40 years, playing instrumental roles during the years when Perth invigorated Australian racing and was the country’s “big pond”

When the Peters entered the game Perth was the natural destination every summer for the best from the east.

In 1982 Kingston Town ran – and won – his last race in the event now named after him.

Peters also had success in the eastern states with such good horses as Congressman and Spectrum who were trained by George Hanlon.

The Peters are now their state’s biggest and most successful owners and breeders and greatest supporters, establishing a record that is nothing short of astounding.

The magnitude of their achievement is acknowledged by the world’s biggest racing and breeding organisations.

“Bob is one of the best breeders in the country and has been for many, many years,” said Coolmore’s Australian general manager Michael Kirwan told the West Australian newspaper in the wake of last summer’s results.

“He and Sandra have enjoyed a wonderful year and their success is testament to the work they put in to achieving the best results.

“I expect, given their investment in more quality bloodstock in recent years, that their success will continue to grow from here.

“Many of Bob’s families have been patiently developed over time and he is very conscientious with his matings.”

The Peters, along with Coolmore, the China Horse Club and Ramsey Pastoral, are also members of the syndicate that purchased last season’s Golden Slipper winner Vancouver.

Their cerise and white silks that have accompanied more winners in Western Australia than any others were carried on four runners in the Kingston Town with Neverland doing the best outside the placegetters, finishing fourth.

Peters says he’s not making a decision on the Autumn yet.

“It comes around a bit quick. Perfect Reflection is going to the paddock now. I don’t have anything in mind yet for the Autumn.

“Delicacy runs in the Cox Stakes and I’ll see how she is after that. She had a full campaign earlier this year so I’ll look at the program and have a think about it when we get this one out of the way.”

While there is plenty of science in the process that has produced so many outstanding racehorses, Peters admitted there hadn’t been a lot in the programing that led to the three-year-old filly Perfect Reflection running against older horses in Saturday’s race.

“She shouldn’t really have been running in a Group 1,” he said.

“But the Guineas came to close after her previous run, so we took our chance.”

And just as Perfect Reflection displaced Delicacy, there is every chance her position at the top of the Peters’ pecking order is under threat.

Her dam Reflected Image, whose eight foals to race have all won, has had three more since Perfect Reflection who are yet to get to the track, the latest a filly by Americain.