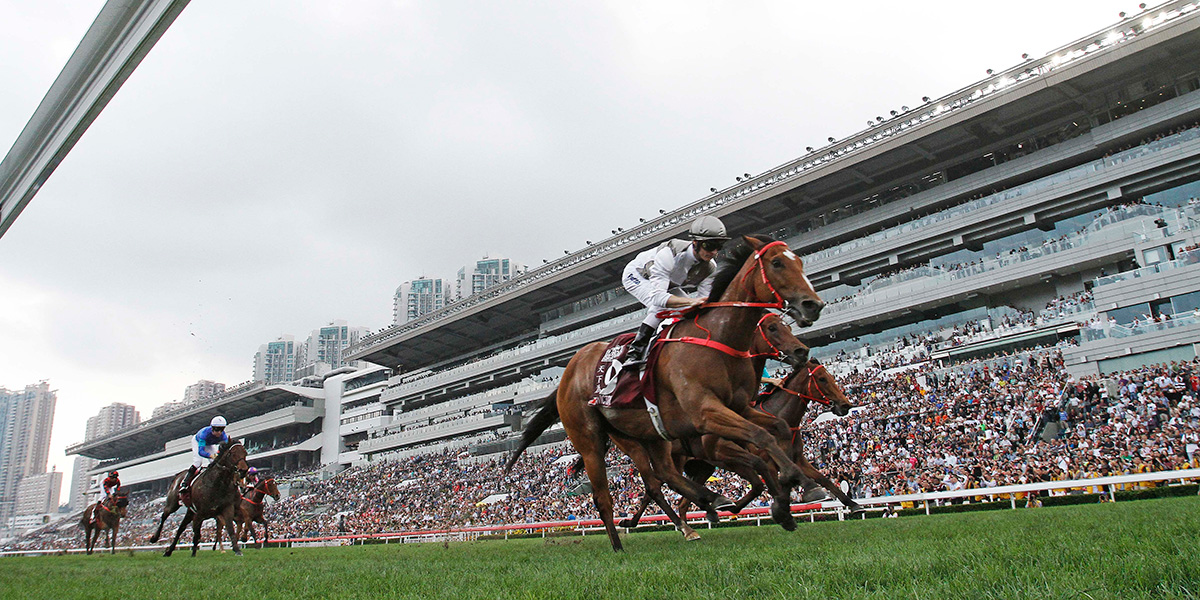 The rise and rise of the talented galloper iVictory went global on Sunday when the John Size trained flyer fought out in a thriller in the HK$16 million (A$2.7 million) Group One Chairman’s Sprint Prize over 1200m at Sha Tin.

Australian-breds have now won 25 of the 40 editions of the Chairman’s Sprint, including the last three in succession (Chautauqua won in 2016).

Although Ivictory was named Chile Green in Australia, he has definitely lived up to the Hong Kong reboot, capturing seven of his eight outings, with the only glitch a fourth – beaten just over a length – in June last year.

Not surprisingly, he has the attention of Hong Kong racing fans and local media was quick out of the gates on Sunday night, declaring a ‘star is born’.

It’s certainly been a heady ascent as trainer Size points out: “It’s a big jump actually, coming up from a Class 2 to a Group One. Ivictory has given us all the signs and his past two wins, in particular, were pretty emphatic, including a track record at Happy Valley.”

“There was still the possibility that it might be one run too early for him, but he showed he was right up to it.”

Winning jockey, Zac Purton, was equally impressed, enthusing that: “Obviously he had shown at his previous two outings that he might be something special but until you see them cope with the pressure at this level, you never really know. He’s well and truly proved that he’s up to it.”

Ivictory becomes the 39th stakes winner for Success Express stallion, Mossman, whose other Group One winners include the mighty Buffering and Golden Slipper winner Mossfun as well as Ofcourseican, Plucky Belle and Miss Mossman.

Indeed, Mossman has been represented by seven stakes winners this season, but it appears the popular stallion, covering nearly 1400 mares since retiring to stud in 2000, has come to the end of the road and thus doesn’t feature on the Vinery Stud roster for this spring.

“Mossman has been a terrific source of high class winners for Vinery over a long period of time,” Vinery Stud’s Adam White points out.

“He of course has multiple Group One winners in Australia, but has also enjoyed considerable success abroad. Buffering won at the highest level on the world stage and now he has a Group One winning sprinter in Hong Kong to add to his impressive stud career.

“It is incredible to think that a colonial horse like Mossman has sired stakes winners in eight different countries.”

Ivictory was offered via Murray Murdoch’s Fig Tree Thoroughbreds at the 2015 Gold Coast Magic Millions Yearling Sale where he was knocked down to Aquanita Racing for $80,000.

“A client of ours, Patrick Lee, purchased Ivictory as a weanling and we raised the horse and prepped him for the yearling sale,” Murdoch explains.

“He was a nice type for sure, but not a ‘wow’ horse by any means. Strange how it works out some times.”

A long-time Queensland breeder who purchased the boutique Fig Tree around 10 years ago, Murdoch mused at the ups and downs of the thoroughbred breeding industry.

“It’s been an interesting year to date … we’ve had Ivictory doing such a great job in Hong Kong, but we also bred and sold a Spirit of Boom weanling for $10,000 and he made $300,000 at the Adelaide Magic Millions in March. Who said you don’t need a sense of humour,” Murdoch adds with a laugh.

It was a similar story for the new owners of Inca Lagoon who snapped up the 8YO mare for just $6,000 at the 2016 Inglis Sydney Weanling and Broodmare Sale, in foal to Star Witness.

The resulting colt was subsequently knocked down to Kristen Buchanan Racing for $55,000 at this year’s Inglis Sydney Classic Yearling Sale.

Inca Lagoon currently has a weanling colt by Reset and was covered by Dissident last spring.

HOOFBEAT: While Ivictory led home an all-Australian trifecta in the Sprint, other locally bred stars shone on the rich Sha Tin program, including Western Express (by Encosta de Lago) who finished second in the Group One Champions Mile, while Queensland Derby winner, Eagle Way, ran home solidly for third in the Group One Queen Elizabeth II Cup.