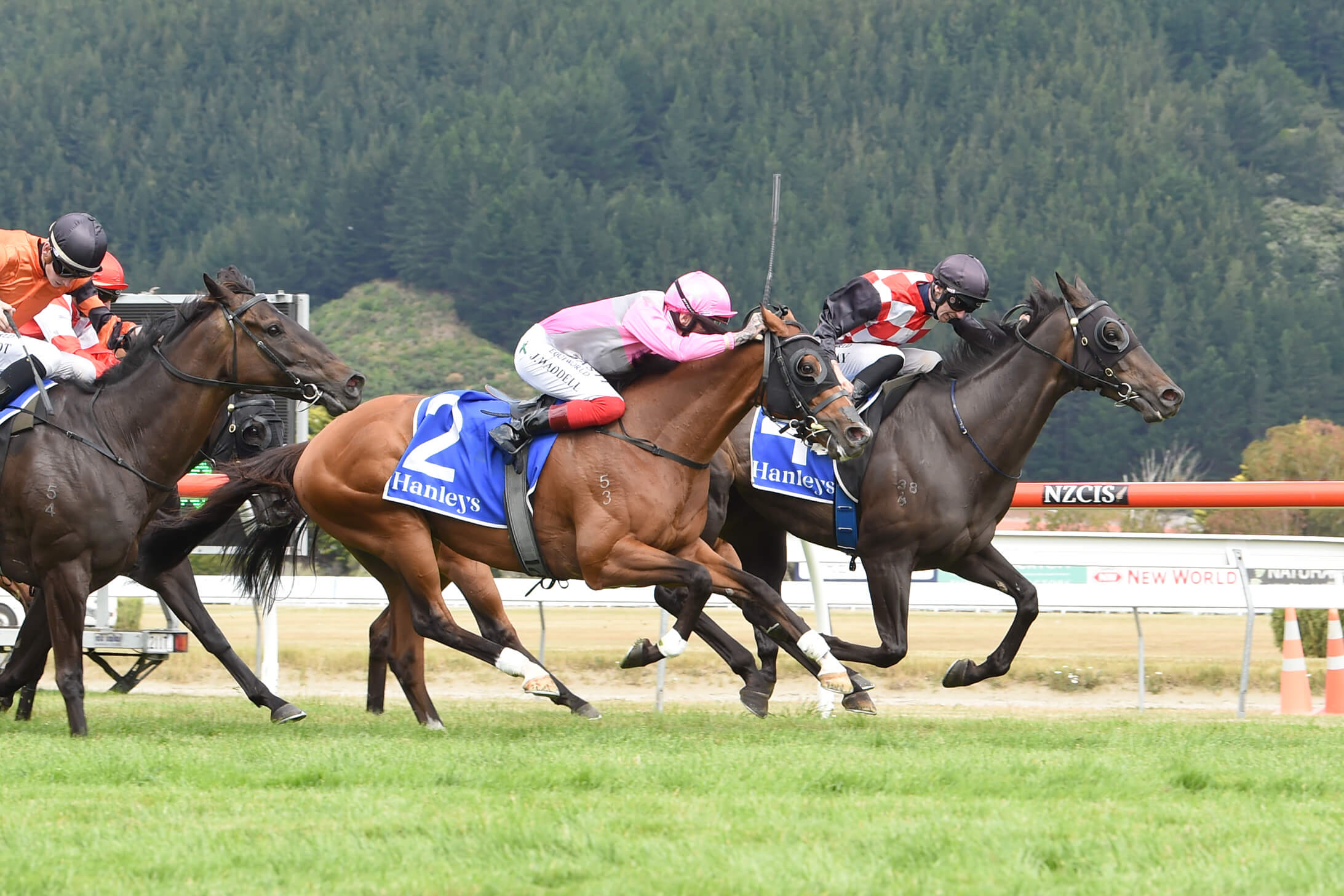 The Mitigator (inside rail) leads all the way in the Gr.1 Harcourts Thorndon Mile (1600m) (Race Images/Grant Matthew)

It’s taken a while, but for Laurie McCarthy’s Greta West Stud the timing of Victorian stallion Master Of Design’s first Group One success as a sire couldn’t be any better.

McCarthy is preparing the only Master Of Design yearling entered for Adelaide’s Magic Millions sales in March.

As a half-sister to the talented South Australian-trained three-year-old Free Of Debt, the filly was already assured of attracting interest from Adelaide buyers.

But with Master Of Design siring the winner of the Group One Thorndon Mile in New Zealand at the weekend, McCarthy has an additional marketing angle.

In a never-say-die attitude that has become a trademark of his racing, The Mitigator led and held on to win as one of the outsiders in the famous Trentham race.

“It was a bit of a surprise really but he’s been a tough, handy horse over there all the same,” McCarthy said.

“That will certainly be a kick along for the filly going through the Adelaide sales.”

Winner of the Group One TJ Smith Stakes in 2012 among seven victories and almost $1 million in stakes, Master Of Design hails from a famed family of the Australian Stud Book.

Master Of Design’s dam is the winning Last Tycoon mare Urge To Merge, making him a half-brother to the champion South African filly Suntagonal.

Urge To Merge is herself a sister or half-sister to five stakes winners including Tracy’s Element who in turn is the dam of the 2010 Australian Horse Of The Year racemare Typhoon Tracy.

Master Of Design was retired to Sweetenham Stud but found his way to Greta West in the northeast of Victoria for the 2017 breeding season.

He is a sire typical of the stallions who have made a home for themselves at Greta West in that he is a consistent win-getter who stands at an affordable fee.

Greta West remains one of Victoria’s oldest family-owned studs with its stallion honour roll including Toy Pindarri, a sire of more than 300 winners, including three at Group One level.

During a time when breeding to race was the norm rather than the exception, Greta West was in its element.

The farm was often the first choice for smaller breeders from regional Victorian and southern NSW to send their mares but McCarthy accepts the landscape has changed.

“Once we would serve 150-plus mares on farm and none of their progeny would go to the yearling sales,” he said.

“Now everyone makes a decision on what stallion to use by what the yearling is worth if they try to sell it.

“Hence they either go to the proven stallions or the first-season sires.

“We used to breed to race. Mares would turn up, get served and we never worried about yearlings.”

McCarthy is preparing five yearlings for this year’s round of sales and after much thought Free Of Debt’s half-sister will go it alone as his only Adelaide entry.

“She is a late foal but that said she’s a good, strong filly,” McCarthy said.

“I tossed up whether to send to Adelaide but Free Of Debt is such a well-known horse there. We sold him through there.

“I think there’s probably more plusses in selling her at Adelaide than keeping her back for a later sale.”

Master Of Design stands alongside King Of Prussia, a son of Anabaa who has also been in the news thanks to the purple patch of summer form of Yulong January from the Ciaron Maher-David Eustace stable.

Yulong January has been one of the finds of the Melbourne off-season, winning four successive races in a sequence that started on Ballarat Cup day in November.

But for the moment it is Master Of Design who has bragging rights on a farm that continues to leave its mark at the highest level having also raised Group One winners Le Romain and The Quarterback in recent years.

“He’s a good ready-to-race horse and it’s great for him to get a Group One winner,” McCarthy said.

“And it’s nice when you’ve got a horse on the farm that gets a Group One winner. I certainly gave him a pat.

“I don’t know whether he had heard or not so I told him the news.”