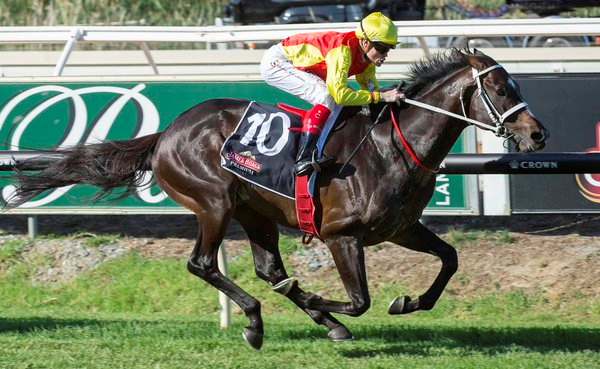 With only two prior starts at stakes level, Chris Waller plunged his four-year-old Good Project into the deep end on Saturday, but the son of Not A Single Doubt rose triumphant, winning the Group 1 Railway Stakes by two lengths.

As the 2016 yearling sale catalogues are being released, two close relations of Good Project now have a Group 1 winner in their pedigree, with Fairhill Farm’s Mike O’Donnell looking forward to the upcoming sales.

Taken straight to the front in the $1 million mile by jockey Craig Williams, the victory gave Macau-based businessman Mr CC Lai his second Group 1 victory in the space of two weeks after the win of Delectation in the Darley Classic at Flemington.

Having targeted the race all along, Waller knew his runner was more than capable of being in the finish and expressed his thoughts to Williams.

“Chris said to trust the horse because this was the race they had targeted,” Williams said.

“I was a little bit worried when he was under pressure but he was trained up to the minute.”

O’Donnell always felt the Not A Single Doubt colt had the quality to go on and perform on the track.

“He was an outstanding yearling that had great presence. He always had the right attributes to be a Group 1 horse, and he’s proven that today.”

In what was an exciting day for Arrowfield Stud’s Not A Single Doubt, not only achieving his second career Group 1 winner, but also a new Listed winner in the shape of Let It Slip earlier in the day, the stakes-winning son of Redoute’s Choice jumped into fourth position on the General Sires’ table.

The equal second highest priced colt ever sold by his sire, Good Project’s win caps an outstanding season to date for Waller, giving the Champion trainer his 10th individual Group 1 victory and 16th this year.

Out of the winning Final Card mare Euchre, Good Project is the third stakes performer for the mare with her earlier foals Alacarte being a winner of 11 races and multiple stakes placed, while World Airlines is a winner of 10 highlighted by his victory in Singapore’s Group 2 TC EW Barker Trophy.

Euchre’s current yearling is a filly by Champion Two-year-old and first-season sire Pierro that will head towards the 2016 Inglis Easter Yearling Sale.

“She is a late foal and has plenty of leg. When comparing them, Good Project was a fair type at the beginning of his prep and furnished very quickly as the prep progressed, where as she is later, purely due to being born later,” stated O’Donnell

“My guess is that she will not be a pre-Christmas two-year-old like her brother was. I would think that she may even get over a trip on type.”

“She has a very relaxed temperament, as he did, and she does everything that is asked of her, as he did.”

Purchased from breeder Richard Pietrykowski before Good Project was sold as a yearling, the O’Donnell-owned Euchre was covered by Newgate Farm’s Eurozone in mid-September with the resultant foal bred on a successful Encosta de Lago x Final Card cross.

It is also interesting to note that Good Project’s pedigree traces back to Sir Tinka, a winner of the Winterbottom Stakes before finishing second in the Group 1 Railway Stakes back in 1994 when they were run four weeks apart.

With the release of the 2016 Inglis Classic Yearling Sale catalogue late last week, there is another timely update for Good Project’s pedigree with his half-sister Ultima Carta (Choisir) represented by her first foal, a colt by Magic Albert as part of Fairhill Farm’s draft as Lot 328.