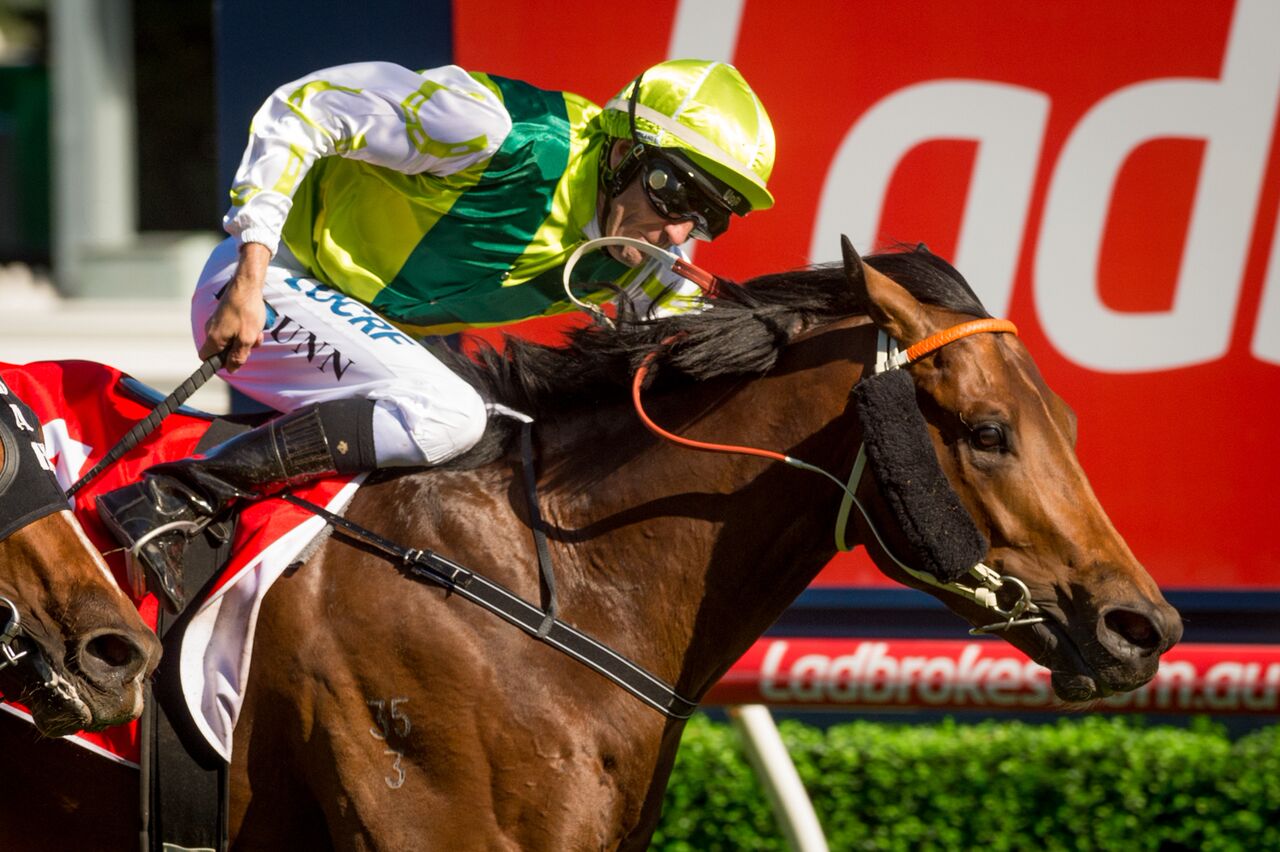 It took Tony Falcone longer than he had planned. Flying to Sydney on Sunday, Falcone was stranded for several hours at Melbourne airport due to the high winds.

He made it eventually but some of his luggage didn’t.

Falcone wasn’t too worried though because the ‘carry on’ – a Caulfield Guineas trophy – had remained close by throughout.

Some 24 hours earlier Falcone had cheered on his colt, Divine Prophet, to Group One success and nothing, nothing, was going to rain (or blow) on his parade.

After all, winning a Caulfield Guineas had taken Falcone a lot longer than he had planned too.

Owning horses with his brother, Mario, since the mid 80s, Falcone had come close to success at racing’s most elite level a couple of times, but until Saturday’s $1,000,000 Ladbrokes Caulfield Guineas, had come up short.

For a moment there, it appeared that Divine Prophet might come up short as well but held on gamely as Seaburge and Hey Doc made strong challenges right to the wire.

Bred by Falcone and a son of a Choisir – “we only breed to race them ourselves” – Divine Prophet is now a multi-million dollar proposition given that the Caulfield Guineas is renowned as a ‘stallion making’ race.

“It’s not something I’ve really given much consideration too,” an elated Falcone points out. “Sure, we’ve had a number of enquiries about standing him as a stallion, but he’s still got a lot more racing in him.

“It will all depend on how he pulls up from Saturday’s run as to whether he has another start this campaign or is tipped out for the Autumn, but ultimately it will be up to John (Hawkes).

“John, Michael and Wayne have done a fantastic job with Divine Prophet and whether or not the colt starts in the Cox Plate, I’ll be happy.”

Having just his seventh career outing in the Caulfield Guineas, Divine Prophet made his debut on Boxing Day last year at Randwick and then won next start at Kembla in March.

Given a tilt at the Group One Champagne Stakes in April, Divine Prophet gave a great show, eventually finishing third behind Prized Icon, just a length off the winner.

Resuming in the Group Three Up & Coming in August, Divine Prophet notched up his first black type victory before putting in a fourth in the Group One Golden Rose, then a long neck second in the Group Two Stan Fox and, now, a Caulfield Guineas.

Even after the trials and tribulations of his flight home, the shine hadn’t worn off for Falcone by late on Sunday night.

“The feeling is indescribable … waiting at an airport and missing luggage doesn’t take away the hype. We’ve wanted a Group One for so long but to actually breed the winner too … well, that’s something else again.”

Falcone had once thought Divine Prophet’s full brother, Proisir might turn his vast promise into Group One success, but the entire (four years older than Divine Prophet) was plagued with injuries and would have to settle for seconds behind It’s a Dundeel in the Spring Champion Stakes (beaten a lip) and Randwick Guineas (a half length).

“We actually raced Divine Prophet and Proisir’s dam, Prophet Jewel, who won six races and over $130,000 in stakes. In fact, Mario and I had mainly raced horses in partnership up until then and Prophet Jewel was the first horse we owned outright.”

Falcone, who is involved in the construction and hospitality industries, only breeds a couple of foals each year and sent Prophet Jewel to Fusaichi Pegasus the first two years, Choisir the next (Proisir), then Dane Shadow, Dylan Thomas, Dane Shadow again and eventually, back to Choisir (Divine Prophet).

With an Exceed And Excel filly last year and a Dissident filly this spring, Prophet Jewel now has four winners from five to race, two of them stakes winners and yes, finally, one of them a Group One winner.

“I always liked Choisir – he was a top racehorse and is a very good sire … an even better one after Saturday!”

Divine Prophet was the 10th individual Group One winner for the Coolmore Australia based, Choisir who currently claims 77 stakes winners and over $88 million in progeny earnings.

A Champion racehorse in his own right at two and three years with Group One success in Australia (Lightning Stakes) and England (Royal Ascot Golden Jubilee), Choisir would only finish third in his tilt at a Caulfield Guineas, but now has two Guineas winners of his own in Starspangledbanner and Divine Prophet.

“Choisir is enjoying another hugely successful year with stakes winners on four different continents!,” Coolmore Australia’s Sales and Nominations Manager, Colm Santry, points out. “He probably doesn’t get the credit that he deserves, but he is honing in on 1000 career winners and horses like Divine Prophet, Japonisme, The Last Lion, Defcon and Zenalicious are exciting young horses that will keep him in the headlines for some time to come.

“His consistency in producing top runners means that every buyer that is serious about sourcing top racehorses of the future will have to have his progeny near the top of their lists when it comes around to the yearling sales in a few months.”