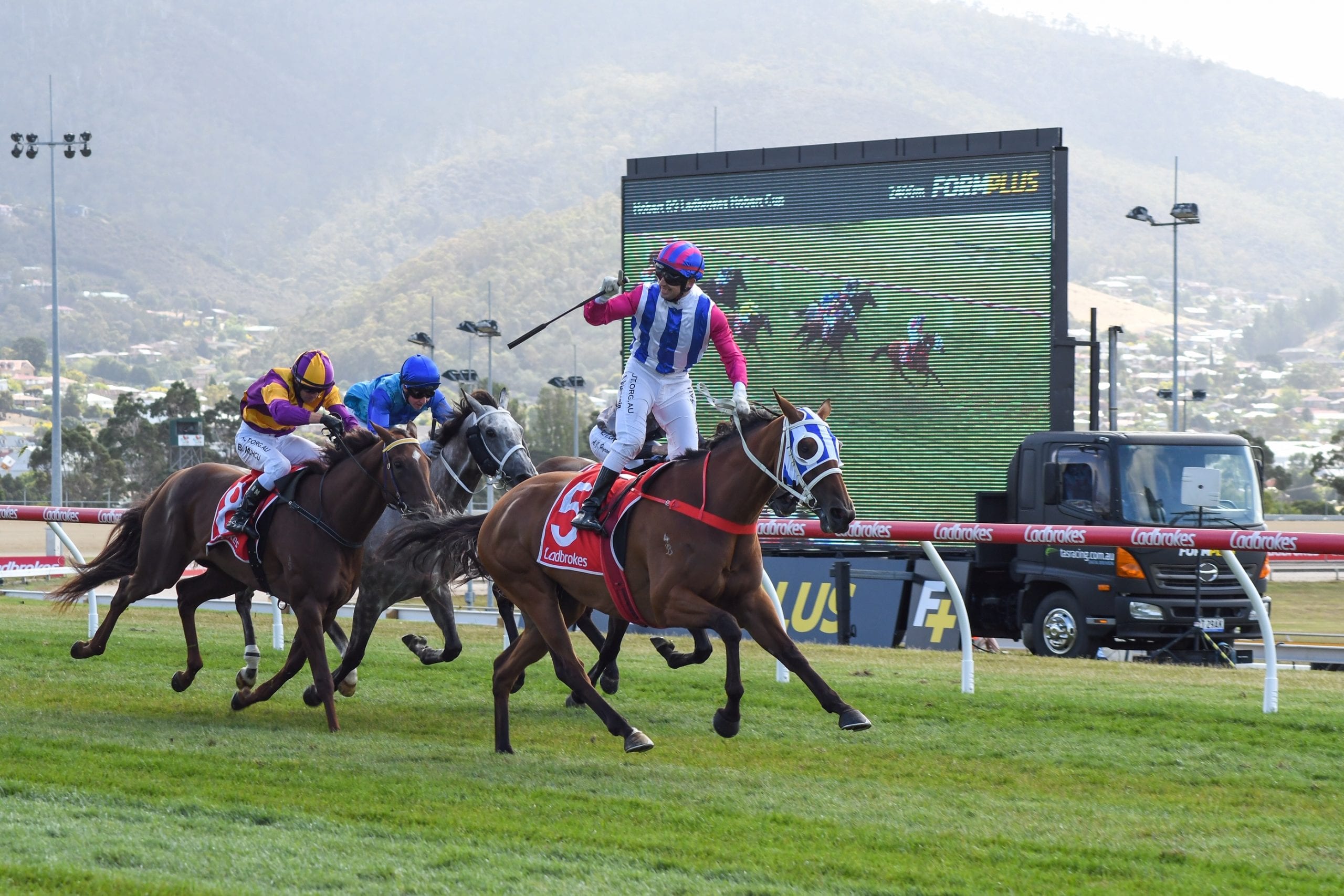 The Hobart Cup meeting – and its four stakes races – has long been a useful ‘marketing tool’ for the Tasmanian Magic Millions Yearling Sale, but none more so than Sunday’s chapter.

Three of the four black type events were won by graduates of the state’s main sale, despite a sizeable presence from mainland ‘raiders’, giving Monday week’s 146-strong catalogue plenty of oomph.

The program’s main feature, the Group Three Ladbrokes Hobart Cup, fielded runners from the stables of Gai Waterhouse & Adrian Bott, Richard Laming, Richard Litt and Patrick Payne, but it was the 6YO mare, Toorak Affair – sold for $50,000 at the 2015 Tasmanian MM – who won the day.

With 12 wins and $352,725 in stakes, Toorak Affair has been a tremendous money spinner for connections, with his sire – Toorak Toff – relocated to Rohan Gudden’s Kingsley Park in Tasmania in 2018.

“I’m very, very proud for my late father … we tried for many years to win a Hobart Cup and I’m really ecstatic in the way the mare won,” said a delighted Trinder.

“I’ve trained some great jumpers over many years that were grand to me and normally on this day I would be winning the Cup hurdle, but this is a different scenario and every day is a bonus. I couldn’t be happier.

“Good horses make you into great judges and she’s certainly done that … I’ve only been there for the ride, the horse has done all the work.”

Just like the Hobart Cup, the Group Three Bow Mistress Stakes was populated with runners from across the Bass Strait and eventually won by the Lindsay Park trained, Zargos, but 2018 graduate, Deroche – purchased for $61,000 by Denise Martin’s Star Thoroughbreds – can consider herself a good thing beaten after being badly held up for a run.

In the weight for age Listed Thomas Lyons Stakes, Turffontein 5YO, Mandela Effect, notched up his 11th career victory and second stakes win on the trot for Scott Brunton, with his earnings now hovering around the $500,000 mark. A great return on the $18,000 he cost when sold by Motree Thoroughbreds in 2016.

Arguably the race of the day, however, was the tussle between the state’s best middle distance fillies – Still A Star and Mystical Pursuit – in the Listed Strutt Stakes.

Still A Star is trained at Longford by Bill Ryan and came into the Strutt with five wins and five seconds from 10 starts, while main rival, Mystical Pursuit had won six from nine with dual stakes success as a 2YO.

Well into the straight on Sunday, Still A Star appeared to be a comfortable winner, but Mystical Pursuit came home with a wet sail, missing by a lip.

A daughter of Swettenham Stud’s Toronado, Still A Star was bred by Alva Stud who offered the filly in 2018 where she was purchased by Monica Ryan for just $13,000. Courtesy of Sunday’s win, Still A Star has $321,190 in prizemoney.

(Mystical Pursuit’s owner, Wayne Roser, purchased the three quarter sister, Mystic Journey the year prior for $11,000 and she has since won over $3.7 million).

Tasmanian breeder, Jenny Watson, is no stranger to mainland success with her homebreds – dual Group One winner and sire, Palentino, Group Two winner Kemalpasa and Singapore Group One winner Eagle among them – and keenly looking forward to the Apple Isle’s single session sale at Launceston’s Inveresk Showgrounds on 24 February.

“A lot has happened in Tasmania in recent years, particularly the development of TasBred which is not only an incentive for local trainers and buyers, but also for those in Victoria, given the scheme also pays out on Super VOBIS races as well,” Watson explains. “This could be a real game changer for us. Transport between Tasmania and the mainland is painless, while our prices are lower, the quality of our stallions is increasing and the racing itself is very much on the improve.

“The winning formula for us too is that we don’t rush our horses. Yes, we’ve had more than our share of good 2YOs, but also have a look at horses like Bling Dynasty, who won as a 9YO at Morphettville this season and Hellova Street, who won his 19th race last month … he’s nine as well.