Queensland Is In The Zone 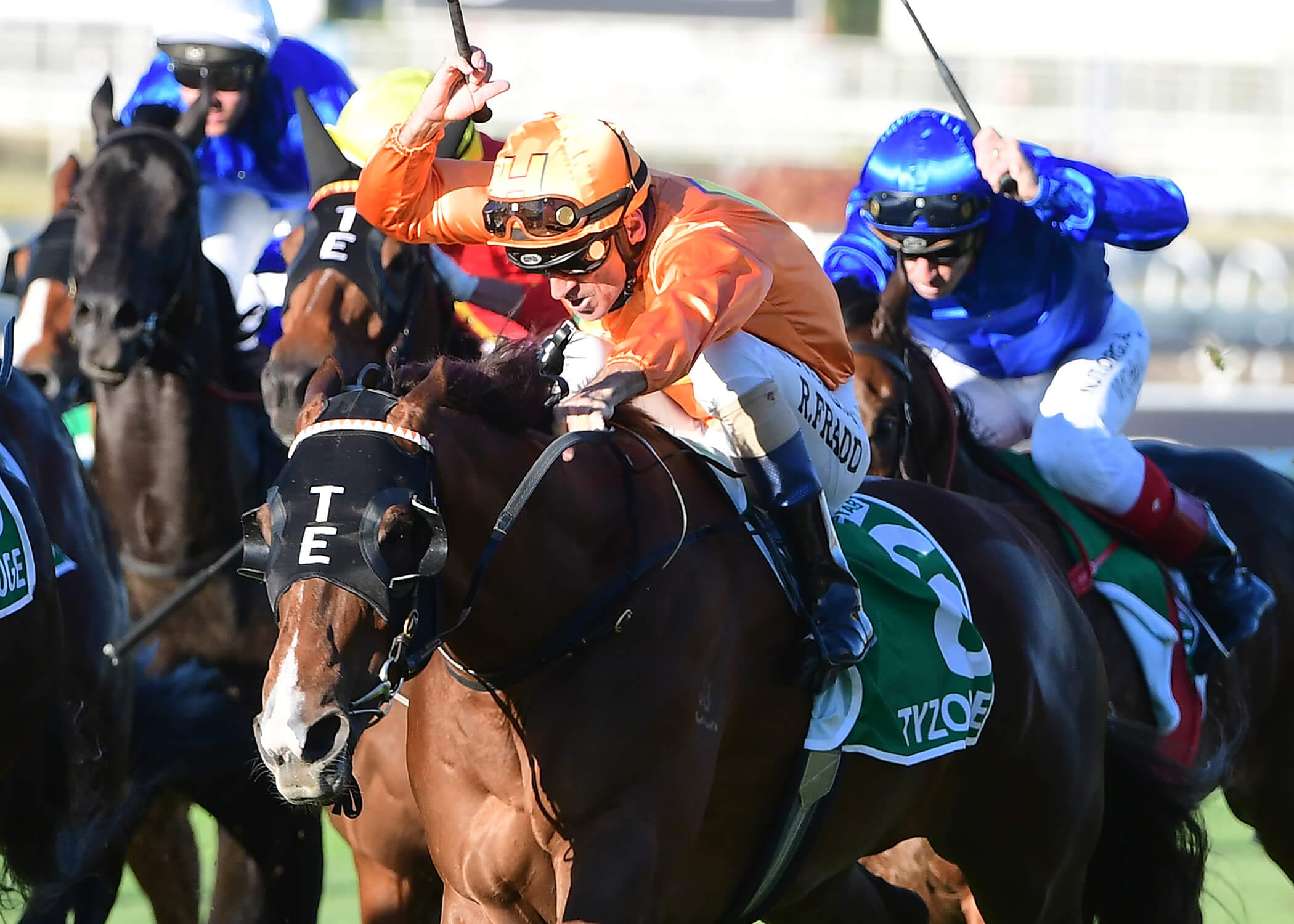 The final Group Ones of the Australian racing season – the JJ Atkins Stakes for 2YOs and time honoured Stradbroke Handicap – have given Queenslanders another state of origin success.

The JJ Atkins would fall to the hugely exciting youngster, Rothfire – six from seven – while the Stradbroke (first run in 1890) went the way of flashy chestnut, Tyzone.

And while Rothfire is trained by Robert Heathcote at Eagle Farm and Tyzone becomes the first Group One winner for father and son training duo – Toby and Trent Edmonds – the victories of both were sung from the rooftops throughout country Queensland.

Rothfire was bred by Gleeson Thoroughbred Connections at Chinchilla – some 300 kilometres north west of Brisbane – and has, somewhat fittingly, earned the sobriquet ‘Thrilla From Chinchilla, while Tyzone is definitely the toast of Tolga, the far north Queensland township where was originally trained.

Definitely a bit further to drive to than Chinchilla – Tolga is 1700 kilometres from Brisbane – the town has a population of 843 according to the last census and, except for restrictions, the local Barron Valley pub would have assuredly had that and more on Saturday night after Tyzone’s victory.

Local trainer, Roy Chillemi, won’t confess as to how many were fronting the bar prior to, during and after the Stradbroke, but admits he wasn’t short of people wanting to buy him a drink.

A trainer in the region for 40 years, Chillemi selected Tyzone from the 2015 Gold Coast Magic Millions Horses in Training Sale, paying $60,000 for the Written Tycoon colt on behalf of long-time owner, Tom Hedley.

Much to their subsequent delight, Chillemi also suggested close mates, Don Scheffler and Gerhard Posselt, buy a share in the horse.

Saturday’s Stradbroke success takes Tyzone’s tally to 17 wins and seven placings from 41 starts for $1,236,500 … 10 of those wins with Chillemi.

“He (Tyzone) is a bit small, but what he lacks in size, he makes up for in heart. He’s shown that since day dot,” a delighted Chillemi points out. “I really liked the way he breezed up for the sales and how much he stuck his head out and tried to go faster.”

Tyzone would finish third on debut at Townsville (February 2016) but then peeled off five wins at his next six starts. Chillemi would then take Tyzone to Brisbane where he was placed under the care of Lawrie Mayfield-Smith. Tyzone would win at Doomben and finish second on the Gold Coast before heading back north.

“It was always the intention to bring him back up here because we still had some races in mind for him,” Chillemi reveals. Indeed, another six wins as it turns out.

The momentum continued when Tyzone was shifted to the Edmonds stable, with the nifty sprinter, by now a winter 4YO, winning his first two for the new stable before placings in the Listed Eye Liner and Listed Ramornie.

Tyzone would taste his first black type success in the Listed Gold Coast Goldmarket in March 2019 and follow up in the May with a comfortable victory in the Group Three BRC Sprint.

Team Edmonds, which has saddled up some very good horses of late in the way of Vanna Girl and Wisdom of Water (Toby has also trained numerous Group winners including Houtzen and Winter Bride), was initially thwarted in its Group One bid when Tyzone was second to Trekking in last year’s Stradbroke Handicap, but were ecstatic with breaking the duck on Saturday.

“Well done to Toby and Trent … that was the first Group One for me too,” Chillemi reveals. “It was a particularly great result for Tom Hedley as well. Tom runs a lot of businesses up in this neck of the woods – plumbing, building, hotels … anything that makes money! – and has been a tremendous supporter of Queensland racing.

“Tom has been with me from almost the start of my training career and we’ve had a lot of horses together … don’t ask me to count them.

“I’m 71 now and scaled back my stable so Tom has horses with a few other trainers, but to be involved in his first Group One winner is just a huge thrill.”

A huge thrill too for Gerhard Posselt who grows and sells lychees and raises cattle on a property around 15 minutes drive from Chillemi’s stable.

“I’ve raced horses for about 10 years with Roy and have shares in eight – all with Roy, except of course, Tyzone, with Toby and Trent,” Posselt explains.
“I started following Roy around with the horses, doing bits and pieces around the stable, and Roy eventually suggested I should get licenced. I started strapping Tyzone and ended up leading him back in after his first lot of wins.

“I always had a good feeling about this horse. Even though he hadn’t won for 12 months, I was confident he’d run a good race on Saturday. He’s got some ‘attitude’ about him and rarely puts in a bad one.

“Winning a Group One though … what a tremendous feeling.”

Success is rarely an orphan and Darling Downs based, Kenmore Lodge, likewise derived plenty of joy from Tyzone’s Group One.

Operating for just on a decade, Kenmore Lodge – owned by Cameron and Kellie Bond – usually ‘breeze up’ between eight to 10 2YOs every year and were responsible for breaking in and educating 2019 Group One Queensland Oaks winner, Winning Ways, on behalf of Paul Makin.

However, Tyzone was actually sourced as a foal by the Bonds and purchased privately from breeder MVO Industries, growing the colt out and eventually selling him at the Horses in Training auction.

“We had entered him for the Inglis Melbourne Premier Yearling Sale but he was just too small and had minor x-ray issues, so we decided to break him in and keep him up here for the 2YOs,” Cameron Bond reveals. “And yes, while he was small, there was a lot of like about him and he did end up running one of the fastest breeze ups. I’m just glad he went to Roy and Tom who have been such great supporters of Kenmore Lodge and usually buy one from us every year.

“They’ve also got a Wandjina 2YO they purchased from us last year called Higher Realm who has won two from four up there with two seconds.”

HOOFNOTE: While Bond is quick to acknowledge that Tyzone is the pride and joy of North Queensland, he reckons the 250-strong township of Dulacca can also take some ‘ownership’ of the Stradbroke winner.

“Kenmore Lodge is now based at Toowoomba – not far from Eureka Stud – but at the time Tyzone came along, Kellie and I were running a grain and cattle property at Dulacca,” Bond points out. “Dulacca is just an hour up the Warrego Highway from Chinchilla, so it’s fair to say that the region produced two Group One winners on Saturday.”