The Things That Unite and Conquer 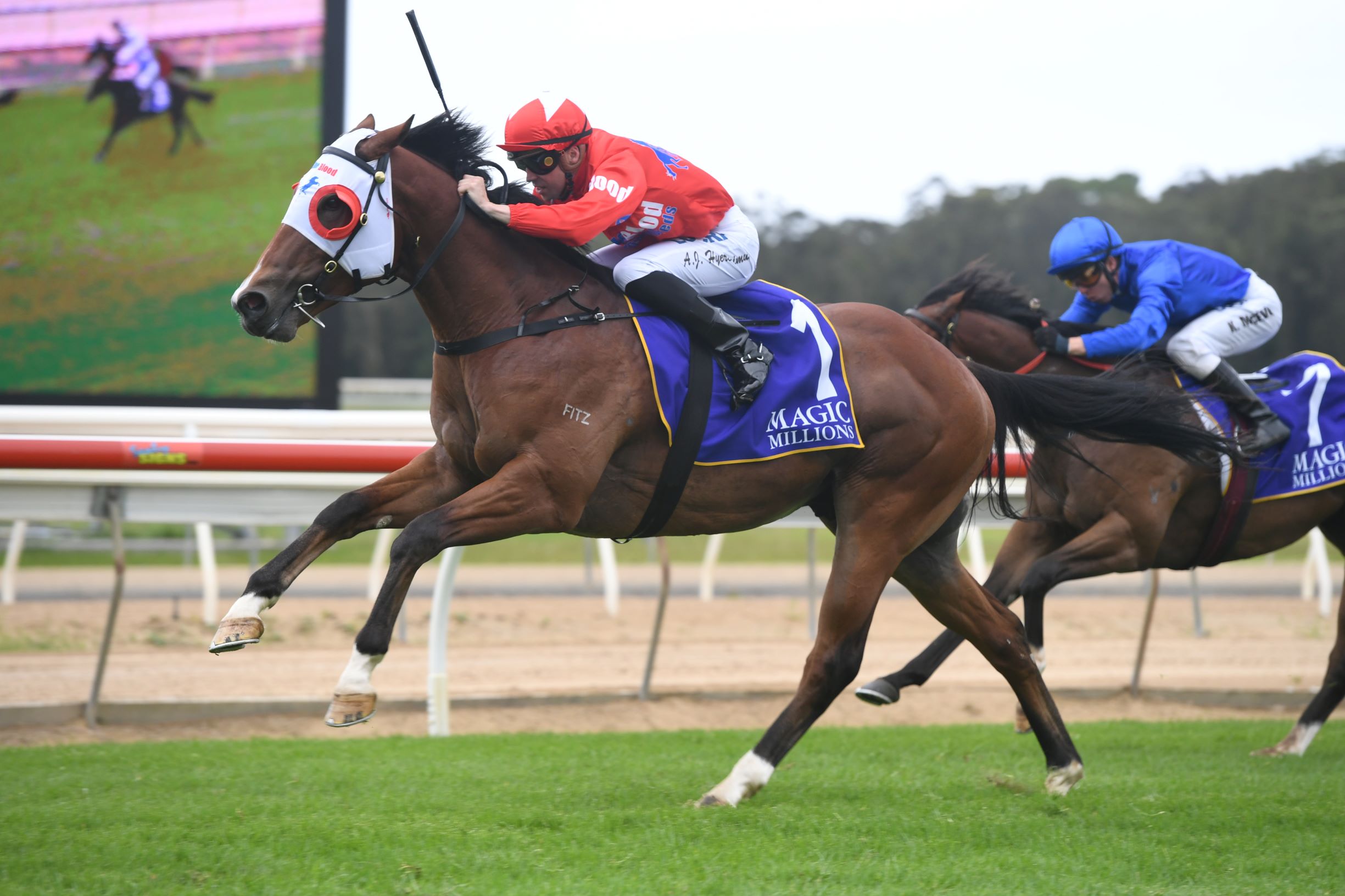 Strange how things work out sometimes. Leading syndicator, Blueblood Thoroughbreds, had already purchased its quota at the 2018 Gold Coast Magic Millions Yearling Sale when approached by Gai Waterhouse and Adrian Bott and asked to have a look at their ‘buys’.

“I had already inspected a Hinchinbrook colt that Gai and Adrian had bought for $80,000 and really liked him,” Blueblood Thoroughbreds’ Racing Manager, David Mourad, points out. “He was a cracking type and I love the Hinchinbrooks … Seabrook hadn’t won the (Group One) Champagne Stakes for us by that stage but was going very well.

“Matter of fact, I had the colt in mind for another of our trainers, but as he wasn’t on that trainer’s short list, we let him go through.

“However, when Gai and Adrian came to us we thought, ‘why not?’ – he’s great value at that price.”

Indeed he was. Now racing in the increasingly familiar Blueblood Thoroughbreds silks, the colt – Unite And Conquer – is unbeaten from his only two starts and is likely to head into Saturday’s $2 million Star Magic Millions 2YO Classic over 1200m at the Gold Coast as ruling favourite.

Stepping out for the first time at Flemington in early October, Unite And Conquer led throughout to score impressively in the Listed Maribyrnong Trial Stakes over 1000m, and was equally dominant on 12 December when again leading all the way in the Wyong Magic Millions 2YO, this time over 1100m.

The two wins have taken his prizemoney tally to $191,750 which already dwarfs the yearling sale price, while a potential $1.2 million prize come Saturday would again be outpaced by the colt’s residual value as a stallion prospect, particularly given his breeding.

The ill-fated Hinchinbrook stood at Yarraman Park Stud alongside boom stallion, I Am Invincible, and produced 16 stakes winners before passing away last year with just seven crops on the ground. Despite his oldest progeny being 6YOs, Hinchinbrook is already represented at stud by dual Group One winner Press Statement and 2YO Group winner, Diamond Tathagata.

Unite And Conquer, meanwhile, boasts three crosses of Danehill, a double dip of Snippets and is out of the multiple winning Magnus mare, Maglissa, a daughter of Group One winner, Danglissa.

“We’re really excited about this colt. It’s a great mix of owners and again highlights the advantages of racehorse syndication,” Mourad adds. “From memory it was just $3,500 for a 2.5% share and the group includes some long-time clients that have also been with us in Seabrook and Secret Agenda (Group One Sir Robert Sangster winner) as well, while there’s also quite a few that are not only new to Blueblood Thoroughbreds, but new to racehorse ownership.

“They’re having a terrific time.”

Mourad, naturally enough, is on the Gold Coast working his way through a not-so-short list and a definite point of call will be the Valiant Stud draft which features a So You Think half brother to Unite And Conquer who heads into the sale ring on Friday evening – some 18 hours before the big race.

“He’s a nice type of colt and already had plenty of admirers coming for a look,” Valiant Stud’s Fergal Connolly enthused. “Actually, I’m really pleased with the response to all 14 of our yearlings up here and while it’s already been quite busy, it will definitely ramp up over the next couple of days.”

The 2019 Gold Coast Magic Millions Sale is particularly notable for the young, ex-pat Irishman who first came to the sale in 2010 and has played an integral role with industry giant, Segenhoe Stud, for the last five years.

However, Connolly took the plunge in May last year, hanging out the Valiant Stud shingle at the well appointed, 200 acre Hunter Valley property with a view to specialising in yearling preparation. The Magic Millions draft is his opening gambit.

(For those of you interested in learning a little Gaelic over your Guinness, ‘Connolly’ translates – somewhat loosely – to ‘Valiant’).

It’s certainly been a valiant effort from Connolly who is neighbouring some big guns at the Bundall sales complex, although he’s hardly daunted by the prospect.

“I’ve had some tremendous support from breeders and owners since I started Valiant Stud and also have a terrific team around me up here,” Connolly adds. “I lease the property at Aberdeen from the Orton family and its got tremendous infrastructure which has allowed me to dive in head first. We’re prepping yearlings for most of the sales in 2019 but I’m not looking past this week … there’s a lot of people up here and I have some nice horses. Can’t ask for much more than that.”