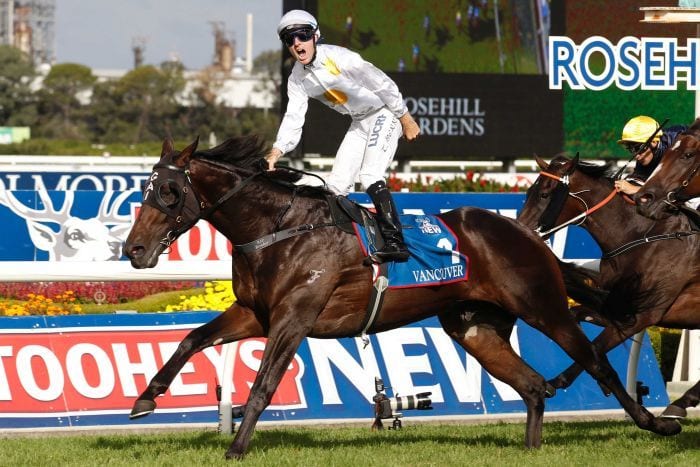 Tomorrow as Ticket to Ride takes to the track in the Keeneland Gimcrack Stakes at Randwick, we look back at her sire, Vancouver’s illustrious career. He debuted with a win in the 2014 Breeders Plate and then continued on to win the Golden Slipper later in the season.

Rewatch the moment Vancouver took out the Golden Slipper.

Four years after winning the Golden Slipper on Vancouver, Tommy Berry will ride his daughter in her debut tomorrow, in the first two year old race for the season in NSW.

The connections run even deeper as John Camilleri of Fairway Thoroughbreds bred and owns Ticket to Ride – the very same breeder of Vancouver and Winx. Many will be watching eagerly tomorrow to see if Ticket to Ride can follow along in her father’s footsteps.

Ticket to Ride marked herself out as an impressive contender, clocking 50.17 in a trial last week, where she nosed out one of tomorrow’s rivals, Stellar Pauline.

Watch the replay of the trial below.

Vancouver filly Ticket To Ride for Michael and @R1CHARDFREEDMAN gets home in heat 4 @royalrandwick . Can she follow in her dad’s footsteps and win the Slipper? pic.twitter.com/KdM4gi2WMC

Trained by Richard and Michael Freedman, the Vancouver filly goes in as a likely fourth favourite, behind Every Rose, Stellar Pauline and Fall On A Star.

Watch Michael’s wrap below on Ticket to Ride’s form and preparation ahead of tomorrow’s race.

Ticket To Ride was impressive at the Official 2YO trials last week and @LizzieJelfs spoke to Michael Freedman of @Freedman_bros ahead of the Gimcrack on Saturday @royalrandwick @R1CHARDFREEDMAN pic.twitter.com/aqoNV8m14h

Straight after the Gimcrack the Vancouver colt, Postcode, runs in the Arrowfield Breeders’ Plate. This juvenille has the benefit of being trained by Gai Waterhouse and Adrian Bott and of course it was Australia’s leading female trainer, who saddled up Vancouver back in 2014.