Anastasiou’s Stradbroke Hope Could Be The One 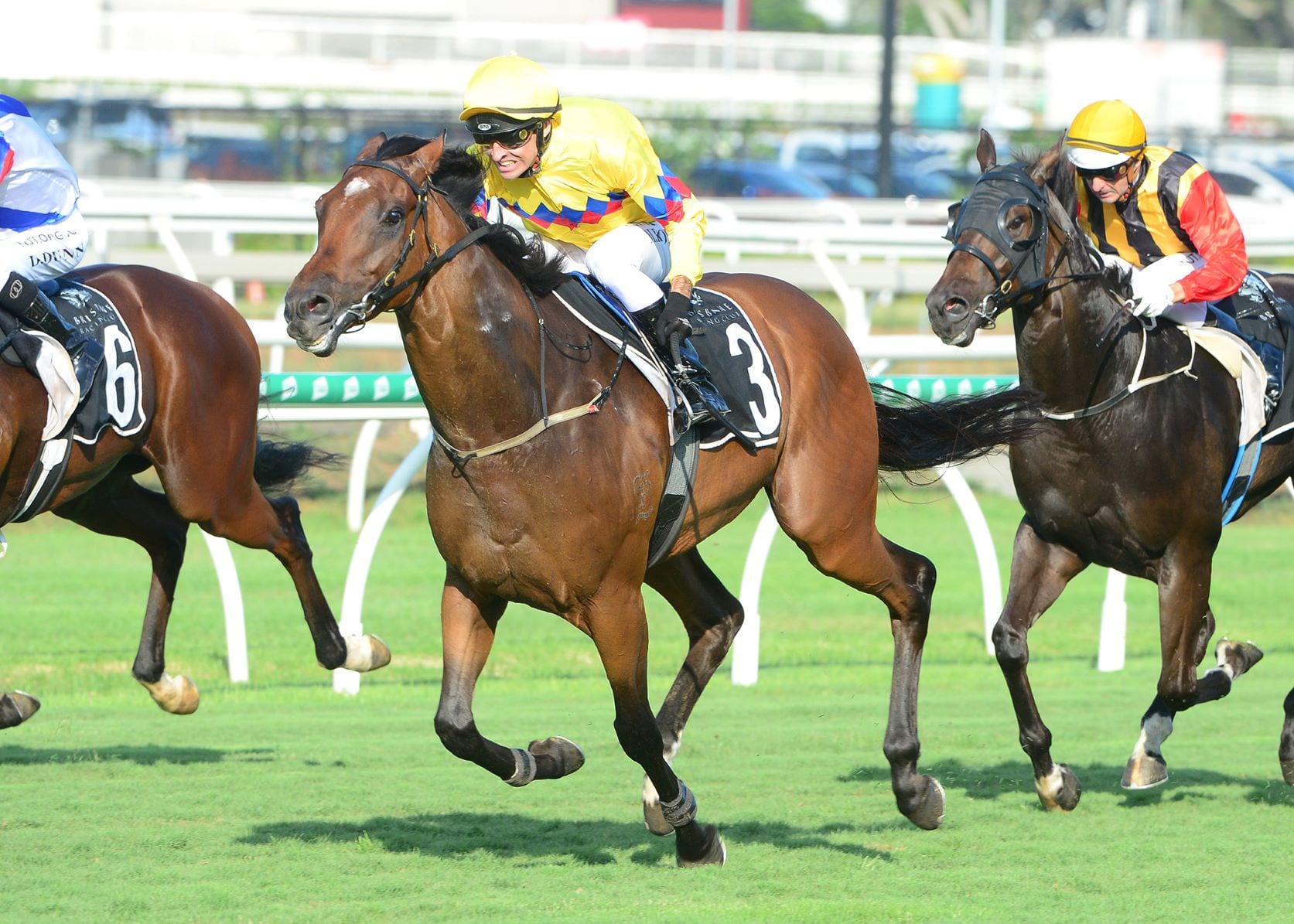 Vega One by Lope De Vega, heads towards the Group One Stradbroke Handicap (Trackside Photography)

It was probably a ‘given’ that breeder/owner, Peter Anastasiou, would take a close look at the More Than Ready mare, Grey Queen, who was entered in last Friday’s Inglis Chairman’s Sale.

Grey Queen is carrying one of only 15 southern hemisphere pregnancies to the incredible speed source, Lope de Vega, who shuttled to Australia for four seasons (2011-14), but now remains in Ireland where he stands at a fee of €100,000 (approximately A$187,000).

Winning out at $275,000 to secure Grey Queen from the Chairman’s, Anastasiou is clearly hoping to replicate another Lope de Vega Group One winner like Santa Ana Lane, Vega Magic, Gytrash, or … Vega One?

Anastasiou races Vega One, who took a massive stride toward the Group One Stradbroke Handicap at Eagle Farm on 6 June with his fast finishing fourth in Saturday’s Group Three BRC Sprint over 1200m at Doomben on Saturday.

On the back of his BRC Sprint performance, Vega One has been installed ruling favourite for the Stradbroke, a position Anastasiou hopes will continue to firm after his 4YO next appears in the Group Two Victory Stakes over 1200m at Eagle Farm on 23 May.

Bred by Emirates Park (who wisely retained a racing share) and sold through Stockwell Thoroughbreds for $75,000 at the 2017 Adelaide Magic Millions Yearling Sale, Vega One has won five and placed in five from 19 starts, for $965,650 in stakes: career highlights including victories in last year’s Listed Queensland Day Stakes and January’s $1 million Magic Millions Cup.

“Vega One is the only Lope de Vega that I purchased as a yearling and the first from a Distorted Humor mare,” Anastasiou reveals. “Distorted Humor (whom Anastasiou stood in Australia for two seasons in 1999-2000) doesn’t stamp a lot of his stock but Vega One really has that Distorted Humor/Forty Niner look about him.”

Alarmingly, Vega One had a tendency to get his hind leg over the ledge in the barrier stalls which resulted in the sprinter being removed from the gates and vet checked in several of his earlier starts.

“He (Vega One) is highly intelligent and I reckon he just gets bored standing around in the barrier,” Anastasiou muses. “I have to say that the barrier attendants at Eagle Farm and Doomben in recent starts have been absolutely fantastic.

“He missed the Stradbroke last year due to a minor issue, but he ran the quickest sectionals at Doomben on Saturday, finishing just a length off the winner.”

Anastasiou usually has 10 in work – racing mostly these days with close mate, Ken Biddick – and breeds from around 10 mares, which are distributed throughout the southern and northern hemispheres.

“Rinky Dink (2004 Group One Australasian Oaks) was special because I raced her and she’s by Distorted Humor, AND, it got the Group One monkey off my back, while Abbey Marie won a Group One (Schweppes Oaks) at only her third start, in her first campaign,” Anastasiou points out. “Landing a feature double at the Gold Coast with Vega One (MM Cup) and Etana (MM Open Quality) in January with the family around me was something I’ll never forget either. That said, a Stradbroke trophy would sit very nicely at home too.”

As for Anastasiou’s most recent broodmare purchase, the Victorian-based businessman is unsure as to whether Grey Queen will stay in Australia or return to the Northern Hemisphere.

The most likely partner – if the northern option is taken – would be Sea The Stars, winner of the 2009 Epsom Derby and Prix de l’Arc de Triomphe and sire of 2016 Epsom Derby winner Harzand.

Sea The Stars came close too in siring an Arc winner in Cloth Of Stars, who was twice placed behind superstar, Enable (2017 and 2018), in France’s most famous race.

Winner of the Group One Prix Ganay and Europe’s Champion Older Male, Cloth of Stars was bred by Anastasiou.

“Cloth of Stars and Grey Queen have a lot in common in that they both hail from outstanding families,” Anastasiou explains. “Grey Queen comes from one of the legendary Aga Khan pedigrees, with her close relations including European Horse of the Year, Daylami, along with his half brother and another Horse of the Year in Dalakhani. Absolutely chock full of black type.

“I’m looking to breed Classic horses and the only other mare I have from one of the Aga Khan’s families is Irish Song, who was purchased on my behalf by Damon Gabbedy and whose first foal for me was Celtic Art, a stakes placed 2YO and likely contender for the Group One Prix du Jockey Club (French Derby).

“I sold Irish Song’s Territories filly last October for €260,000 (approximately A$432,000) and that’s another reason why there is such great value at Australian sales when you can purchase a quality mare like Grey Queen for just $275,000 … in foal to a stallion that stands at nearly A$200,000!”