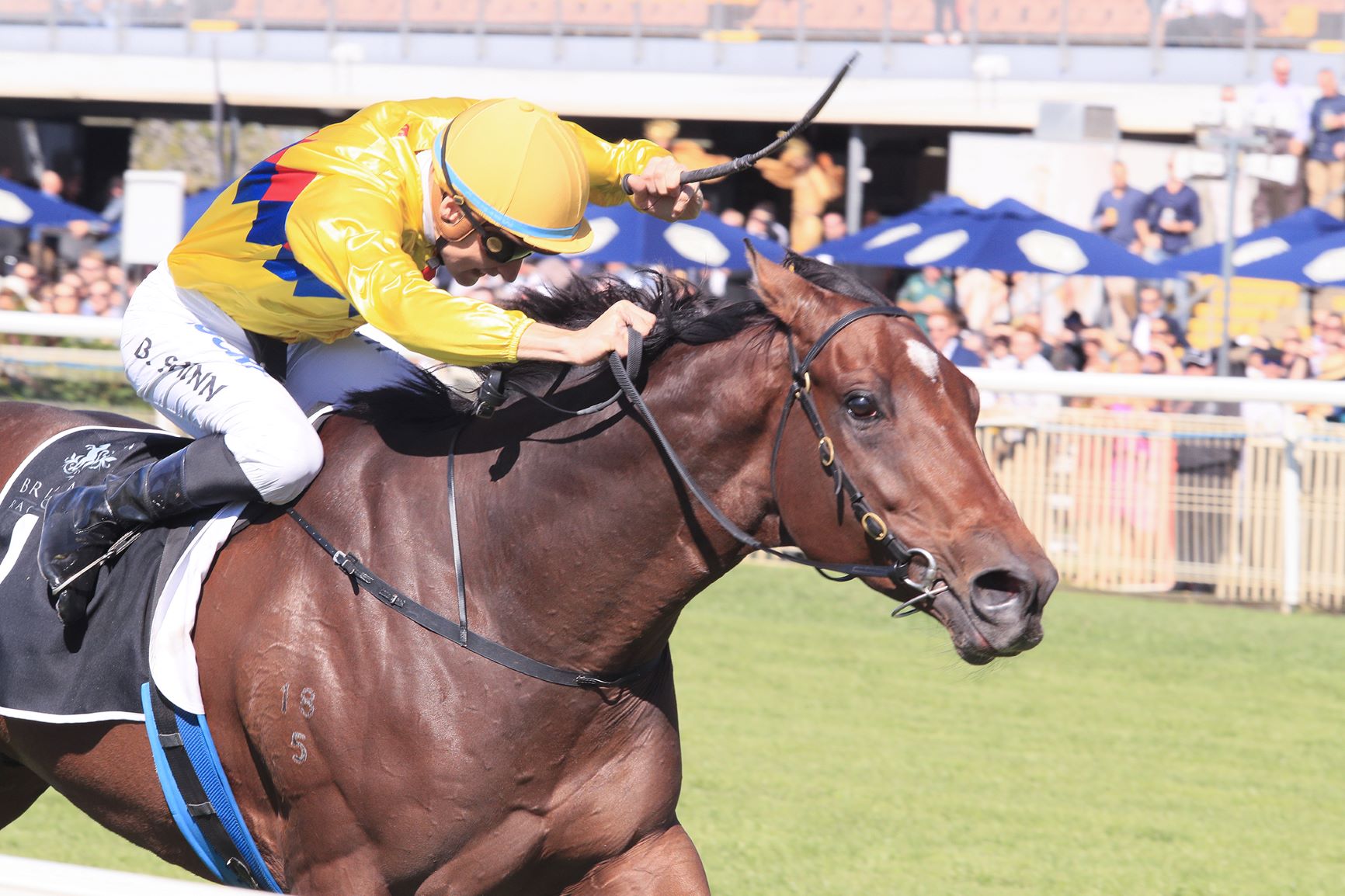 Successful breeder/owner, Peter Anastasiou was playing golf in Vietnam on Saturday and, thus, a long way from Doomben racecourse.

However, Anastasiou did at least get to watch his speedy 3YO, Vega One, display a neat turn of hoof in the Listed Suez Queensland Day Stakes over 1350m … in race record time.

It was Vega One’s first black type victory after coming into the Queensland Day on the back of a second in last month’s Listed Mick Dittman Stakes.

However, the breakthrough hasn’t come without the odd heart murmur for connections.

You see, the trouble is that Vega One has a tendency to get his hind leg over the ledge in the stalls, which has resulted in the 3YO being removed from the gate and vet checked before recent starts. As trainer Tony Gollan pointed out on Saturday: “very frustrating, but he can sure gallop”.

Anastasiou agrees: “He (Vega One) is highly intelligent and I reckon he just gets bored standing around in the barrier. Ironically, he can be extremely quick out of gates and when he has all four feet on the ground he shows just what a good horse he is. Trust me, this is a serious horse.

“He’ll next run in the (Group Three) Fred Best 3YO Classic (over 1400m at Eagle Farm) in a fortnight and a win in that will give him exemption for the  ($1.5 million Group One) Stradbroke Handicap on 8 June.”

Having his 11th outing on Saturday, Vega One has won two of his 11 starts with a further five placings, but since his shift last year to Queensland’s sunnier climes, his tally reads two wins and two seconds from four races.

A son of Lope de Vega from the Distorted Humor mare, One Funny Honey, Vega One was purchased on Anastasiou’s behalf for $75,000 at the 2017 Adelaide Magic Millions Yearling Sale.

Anastasiou has raced horses for nigh on 30 years – mostly in recent times with close mate, Ken Biddick – and paid the feed bills for some mighty fine gallopers: Abbey Marie, Rinky Dink, Moonovermanhattan, Unchain My Heart and Hattori Hanzo among them, the latter also being raced in partnership with Black Caviar’s breeder, Rick Jamieson.

Indeed, both Anastasiou and Jamieson shuttle the Invincible Spirit stallion, Cable Bay, to Woodside Park in Victoria. With Cable Bay’s first runners off to a flyer in Europe, his initial crop in Australia will be offered at yearling sales in 2020.

Standing just the two seasons at Anastasiou’s Grandlodge Thoroughbreds (1999-2000), Distorted Humor left Group One winner Rinky Dink and 4-time Group winner, Like It Is, but since returning to the United States, has produced 16 Group One winners including Kentucky Derby/Preakness Stakes hero, Funny Cide and Breeders’ Cup Classic winner, Drosselmeyer.

“Vega One is actually the first runner from a Distorted Humor mare that I’ve purchased as a yearling. Distorted Humor doesn’t stamp a lot of his stock but this bloke really has that Distorted Humor/Forty Niner look about him and he’s running accordingly.”

Bred by Emirates Park Stud, Vega One is a half brother to Group Two Sweet Embrace winner and Group One Flight Stakes fourth, One More Honey, from One Funny Honey: in turn daughter of Flemington Group winner and VRC Oaks runnerup, Lan Kwai Fong.

One Funny Honey produced a Snitzel colt last spring and is in foal to Fastnet Rock.

“We decided to put Vega One through the (2017) Adelaide Magic Millions and, as we weren’t taking a draft to that sale, he went through under the Stockwell Thoroughbreds banner,” Emirates Park’s General Manager Bryan Carlson explains.

“Emirates likes to keep a share in most of the colts we sell (even though Vega One would subsequently be gelded … and is seemingly all the better for it).

“On top of that, the half sister One More Honey had won the Sweet Embrace just before the sale, plus there’s the Lope de Vega factor … he’s doing a terrific job and I know a lot of farms would love to get him back in Australia.”