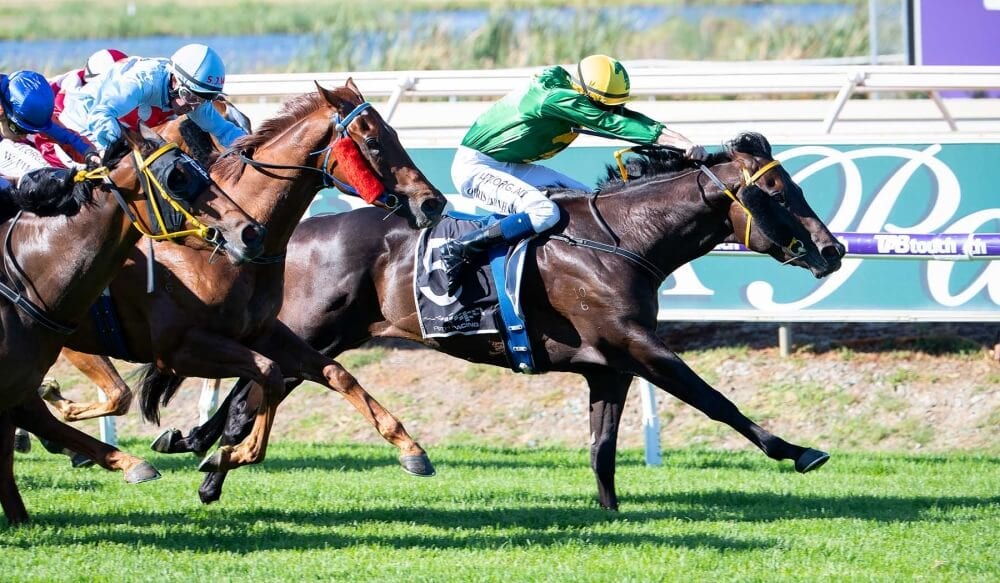 When leading West Australian breeder/owner, Ron Sayers, won the Group Two Euclase Stakes in Adelaide last May with Valour Road, he hadn’t made the trip to Morphettville: choosing instead to stay in Perth and watch his colt, War Saint run in a 2YO race at Ascot.

Regrettably, War Saint – having just his second outing after a convincing win on debut – would finish fifth of seven that day.

There were a number of reasons for him to stay at home: Sayers not only bred War Saint, the now 3YO races in Sayers’ Yarradale Stud silks and is by Yarradale Stud’s prolific Danzig stallion, War Chant (42 stakes winners). However, Sayers had an even more compelling reason to remain in Perth.

“I race War Saint with two former business colleagues and close mates, Terry O’Connor and Mark Connelly, and while Terry might have had a share in a racehorse sometime in the dim, dark past, this is the first horse for Mark,” Sayers points out. “I wanted to stick around just in case he won again. Wasn’t to be though.”

War Saint would ultimately win two of his first three starts at two, but had failed to salute since resuming last month, albeit producing a third and two black type fourths in his three runs back.

Consequently, War Saint was sent out a $31 pick for Saturday’s Group Two Sky Racing WA Guineas over 1600m at Ascot, but soon took up his customary role at the head of the pack. Holding on doggedly, it proved to be an absolute nail biter as they approached the finish line, but in the end they just couldn’t catch War Saint, much to the delight of Sayers, O’Connor and Connelly.

Unfortunately, Connelly wasn’t on hand at Ascot to share in the celebrations, opting instead to watch the race at a pub with son, Luke, and a couple of mates.

“War Saint has won three times now from just seven starts and I was interstate for his first win and overseas for his next,” Connelly explains. “Every other time I’ve been on the track to watch him race, he’s been beaten. Terry reckons I’m the ‘kiss of death’ so I thought the best thing I could do was steer clear of Ascot.

“Ironically, my nickname is ‘Lucky’ and that’s just how I felt on Saturday. Luke had 10 bucks on War Saint – his first ever bet – and a mate of mine who was recently made redundant, had 50 each way. Geez it was exciting and the other people in the pub well and truly knew we were there with the way we were screaming at the TV.”

The G2 Sky Racing WA Guineas was all about Team Parnham!

Although Connelly had worked closely with Sayers for a number of years there was never any pressure to get involved in ownership.

“Sure, we’d talked about it for a while, but then I was at a director’s lunch and Ron said he had a colt by War Chant and would anyone be interested in a taking a share?,” Connelly recalls. “We’d probably all had a few too many but I put my hand up, along with a few others, although it was only Terry and I that followed through.

“My first horse and now he’s won a Group Two! Absolutely fantastic. Still, I don’t think Ron and Terry are going to let me come to the track any time soon …”

Posting a second WA Guineas victory for Sayers (he raced 2009 winner, Clueless Angel), War Saint’s next assignment could well be the $1 million Group One Magic Millions Kingston Town Classic at Ascot on 7 December.

“I’ve spoken to (trainer) Neville Parnham and, while War Saint hasn’t been nominated for the Kingston Town, Neville’s going to have a talk with the club,” Sayers reveals. (It was the fourth WA Guineas success for Parnham, whose son Chris rode the winner, while another son, Steven, was aboard runnerup, Kay Cee).

“I reckon the manner in which War Saint won on Saturday the step up to 1800m for the Kingston Town won’t be a problem. There’s seven horses who have gone on to win both the Guineas and the Kingston Town, with a couple – Playing God for instance – who turned out be a good sires.

“You’ve always got to look to the future … War Chant still has remarkable fertility, but he’s not getting any younger and if War Saint comes out and wins a Group One, I’d probably even stand him somewhere on the east coast. He’s certainly the heir apparent at this stage.”

Following a lifetime involvement in the mining industry, Sayers has scaled back his thoroughbred interests but still has full ownership or shares in over 100 racehorses, around 100 mares and stands six stallions.

“I bought a share in Northerly and he ended up winning nine Group Ones (including the 2001-2002 Cox Plates) and nearly $10 million in stakes. It’s cost me a lot of money in the nearly 20 years since trying to find one to replace him!,” Sayers adds with a laugh.

Despite the many highs with Northerly and numerous other stakes victories, Sayers reckons Saturday at Ascot was one of his most memorable days at the track.

“Aside from War Saint, the third horse in the Guineas, Red Can Man, is by Yarradale stallion, Gingerbread Man, as is Achernar Star who finished fourth in the (Group One) Railway, while the (Listed) Jungle Mist winner, Electric Light, is by another one of my stallions in Vital Equine. Dance Music, also War Chant, got herself some black type by running third to Electric Light.

“And just to top it all off, Downforce won his second race in a row earlier in the day.

“Downforce was bred by Ellie Giles and is a half brother to War Chant’s Group One winner, Silent Sedition. Ellie’s a fantastic breeder and also bred (dual stakes winner) Achernar Star.

“Anyway, Downforce is by Snippetson and was knocked down to Neville (Parnham) for $100,000 at the 2018 Gold Coast Magic Millions Yearling Sale and I took 50%. He could end up being alright.”

HOOFNOTE: It was certainly a day for the breeders at Ascot on Saturday. With five stakes races, four of them were raced by breeders: Regal Power (Group One Railway Stakes) was bred by and races in the cerise and white of Bob and Sandra Peters and Electric Light (Listed Jungle Mist) was bred and is raced by Andy Phelan, while War Saint and Massimo (Listed Placid Ark) had special bearing for their breeders/owners as they also stand the sires of both winners.