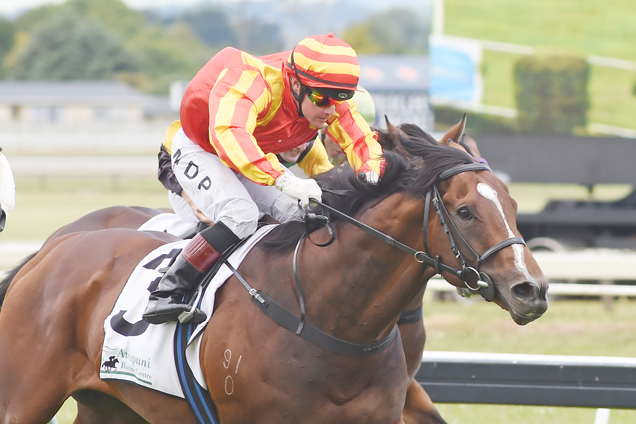 Weregoingtogetcha’s Lonhro half-brother received a timely pedigree update as he is set to sell at the Inglis Premier Yearling Sale as part of the Supreme Thoroughbreds draft in late February.

Sold as a weanling at the Magic Millions National Yearling Sale from the draft of Patinack Farm, the colt was then re-offered for sale on a further two occassions in New Zealand, eventually secured by Woodville trainer and part owner David Hayes.

A winner at his second start as a two-year-old before second in the Listed Ryder Stakes, the entire has always showed his fair share of ability, but now as a five-year-old he was able to crack it for his first stakes victory.

“He’s had a few problems, and he’s a colt who can be quite sensitive,” trainer and part-owner David Hayes said.

“He had colic after Ellerslie, he had a virus after we moved our stable here from Woodville, and he’s had a few problems with his teeth.”

“But he’s done everything right today. He got a perfect ride and produced a great performance. He’s always had Group One ability and he showed what he can do today.”

Reunited with jockey by Mark Du Plessis who had ridden the colt to his Group 1 placing, the leading jockey stated, “I wouldn’t be surprised to see him win a Group One somewhere.”

Out of the well-related Sweetness ‘N Light, from the family of Group 1 winners Grosvenor, National Gallery, Lankan Rupee, Mahaya and Miss Keepsake, it is also the family of Darley’s Champion Lonhro, the sire of Weregoingtogetcha’s half-brother to be sold at the 2016 Inglis Premier Yearling Sale.

Consigned by Victoria’s Supreme Thoroughbreds, Lot 132 is one of 34 yearlings consigned for the four day sale by the farm.

Brent Grayling of Supreme Thoroughbreds states that, “The Lonhro colt is a well put together colt and a typical Lonhro type, he has a lot of quality about him and I expect him to sell very well being that he is in the Blue Riband session.

The current weanling out of the mare is a Pierro colt foaled in early November.