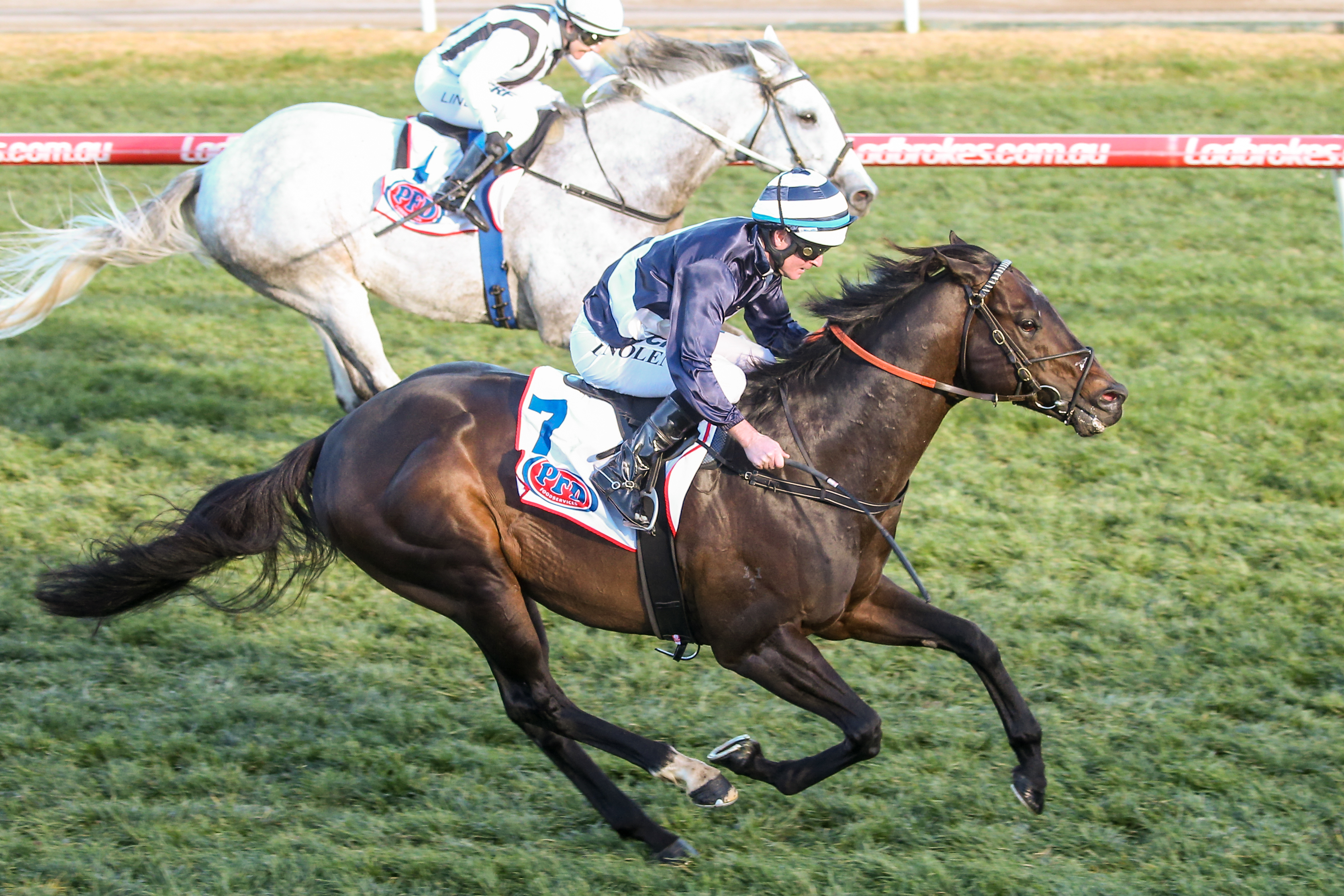 Supido appears to be knocking on the door of Group One glory. (Racing Photos)

Interviewed around 15 months ago – shortly after another of his homebreds in The Quarterback had won the Group One Newmarket Handicap – Jamieson mused that Supido could soon follow suit with a win at racing’s elite level.

By that stage the Mick Kent trained, Supido, had won his last four in town – none at stakes level – and would win twice more down the straight at Flemington before a half length third behind Black Heart Bart in the Group One Goodwood Handicap. Close, but no cigar.

Resuming nine months later with a last of nine in the Group One Lightning, Supido ran third in the Group Two Challenge Stakes behind a pair of Group One winners in English and Redzel, but was again near last at his next start in the Group One Galaxy in March.

It was the Supido of old in the Monash however and the now 5YO entire really does appear to be knocking on the door of Group One glory, and is likely to get his chance in the Memsie Stakes over 1200m at Caulfield on 2 September.

“That was a very good win in the Monash,” Jamieson points out. “It will be interesting to see how he takes the step up to 1200m, but I’ve always thought he was a Group One horse.”

(Supido is the 31st stakes winner for the Widden Stud based, Sebring, and is from Jamieson’s Brian’s Time mare, Lady Succeed).

“She (Lady Succeed) has been a bit of a problem mare and had a few issues along the way, but it’s a mighty pedigree – Machiavellian’s family – and she’s had four winners from as many to race.

“I sold the two year old out of Lady Succeed for $100,000 at last year’s Inglis Melbourne Premier and kept a share in him. He’s with Mick (Kent) as well and I really don’t expect to hear too much more about him for the next 12 months or so.

“She (Lady Succeed) produced a full sister to Supido last August and actually got back in foal to Sebring last year, but slipped along the way. The Japanese horse, Real Impact, might be an option for her this spring, although you’d really have to consider sending her back to Sebring.”

Jamieson’s Gilgai Farm actually produced a running treble at Caulfield on Saturday with the Snitzel pair Portion Control and Nikitas (a half brother to Jameka) both leading into Supido’s Monash.

The breeder of Black Caviar, Jamieson has had a tremendous couple of seasons via The Quarterback (Newmarket), Jameka (VRC Oaks, Caulfield Cup, The BMW), Sebring’s Lucky Bubbles (Hong Kong’s Group One Chairman’s Sprint Prize in May) and now Supido, and believes this is the first time he’s had two stakes winners by the same stallion.

“I’ve never based my decisions regarding stallion selection on commercial practicalities,” Jamieson adds. “The dams of both Supido and Lucky Bubbles were sent to Sebring before he had really started to hit his straps and I’m only swayed by my belief as to how the mare matches up to a particular stallion.”

Gilgai Farm has previously operated from a base of around 20 mares, but the population has practically doubled in the last year or so.

“I’ve currently got around 40 mares, the results from which won’t filter down for a couple of years yet,” Jamieson explains. “I’m spending a lot more time on my horses than I have previously and am really enjoying it. Especially when you get another Group winner!”

Jamieson is also excited about the prospects of Cable Bay, the multiple Group winning son of Invincible Spirit he imported to stand at Victoria’s Woodside Park Stud this season.

“It’s something of a personal project and has been fantastic,” Jamieson enthused. “Breeders submit their mares for consideration and I ultimately make the decision on whether to accept the nomination or not.

“This is definitely a different approach, but broodmare owners have really embraced it. They’re often a lot more curious as to why they’ve missed the cut.”

If Supido does win his Group One, just two days into the new covering season, expect to see a few more disciples lining up for the Jamieson jaunt.

Supido’s victory comes as no surprise to Three Bridges’ Toby Liston, who sold the Monash winner, on Jamieson’s behalf, for $190,000 at the 2013 Inglis Melbourne Premier.

“He (Supido) is just the best looking horse,” Liston recalls. “He was my dad’s (Peter) favourite yearling from that draft and is just such a classy type.

“That was a very good auction for Three Bridges, as we also sold the (Group Two) Alister Clark winner, Chill Party, and the stakes winners Exclusive Lass and Japhils, along with Lucky Bubbles … also on behalf of Gilgai Farm.

“With his strike rate, Rick is arguably the best breeder in Australia and is a freak with genetics. He just keeps on coming up with the winners. Great for him, great for Victoria. Great for Australia.”