Winx – In The Presence Of Greatness 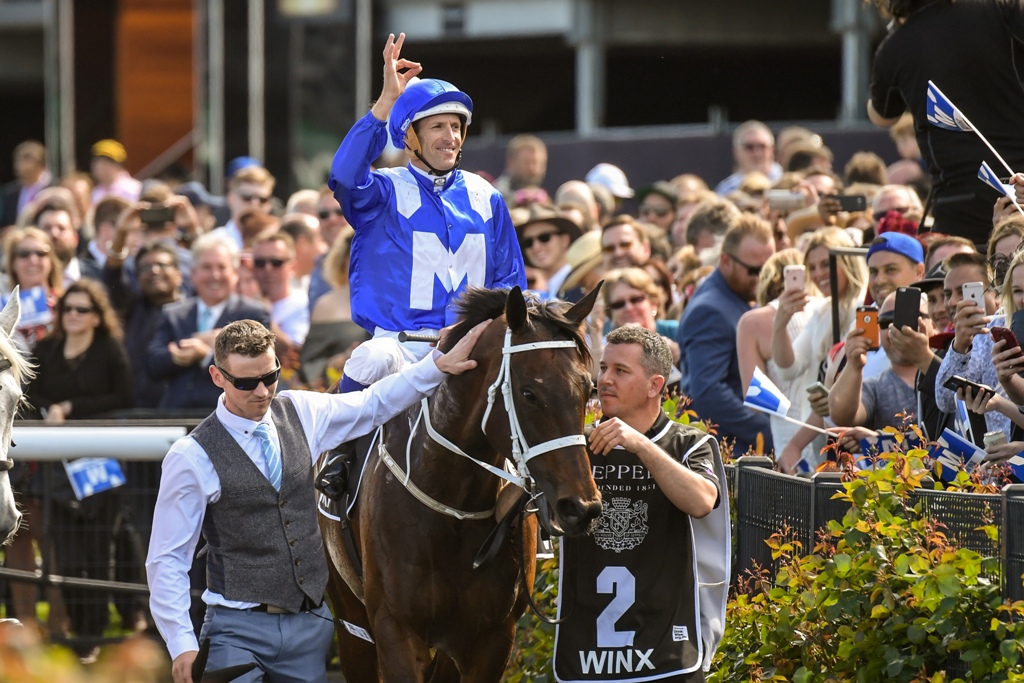 The only certainty in racing is that there are no certainties. Way back in 1939, Ajax had won 18 straight – including the 1938 Cox Plate – and went into the Rawson Stakes, against only two rivals, at 40 to one on. He got beaten.

However, for anyone at Flemington or those huddled around a screen on Saturday watching the Group One Seppelt Turnbull Stakes, it would be sacrilege to suggest Winx cannot win a third straight Cox Plate. Maybe even four Cox Plates!, but let’s not get ahead of ourselves.

Sunline was a $2.80 shot for the 2001 Cox Plate but was considered to have a serious rival in eventual winner Northerly ($3.50), while Northerly didn’t race in the 2003 renewal (injured) and, coincidentally, had his final race in the 2004 Turnbull.
So You Think was despatched to Europe shortly after following up his 2010 Cox Plate with a victory in the Group One Mackinnon and a third in the Melbourne Cup, so it’s a moot point as to whether he would have beaten Pinker Pinker in the 2011 Cox Plate.

However, it will be the exotics that will hold most interest for the punting fraternity heading into the 2017 Cox Plate: Winx is currently installed at $1.25 on most markets, with Happy Clapper and Hartnell on the second line of betting at $17.

For the record, Winx was sent out a $4.60 favourite in the 2015 Cox Plate – her fifth straight victory on the current streak of 21 – winning by nearly five lengths in record time, while $1.80 was around the best you could get in 2016 when she won by the biggest margin – eight lengths – in the race’s colourful history.

It is difficult to adequately describe the nature of Winx’s performance in the Turnbull, but to pinch a term from that great racing fan across the ocean, it was “bigly”.

While the mighty mare had raised some concerns with her Sydney runs – the Warwick, Chelmsford and George Main – all anticipated she would be the Winx of old when returning to Melbourne where she’s never been beaten.

Then again, she hadn’t raced at Flemington before and would she handle the track? Was this the same horse from previous visits?

Was she what! Although settling near the tail of the small field, Winx hit the turn full of running and it was just a matter of how far. Turns out it was 6.5 lengths, but it looked even greater than that.

It’s certainly shaping up to be a hectic three weeks for Winx’s connections with trainer, Chris Waller, saying after the race: “I thought I was under pressure 12 months ago!” and adding “there’s no training manual for a horse like Winx … we’ve managed to get her right but she makes us get it right”.

Meanwhile, jockey Hugh Bowman said that the “openness of Flemington” suited the mare and she was “unenthusiastic last start in Sydney”.

Lack of enthusiasm clearly wasn’t a problem on Saturday.

Winx is currently rated 132 on the Longines World’s Best Racehorse Rankings as at 1 October: the best turf horse in the world and No. 1 mare, but still two shy of Dubai World Cup winner, Arrogate.

That differential won’t change after Saturday according to Racing Victoria chief handicapper and Longines committee member, Greg Carpenter, despite the authority of the Turnbull win.

It’s unlikely to alter even if Winx wins the Cox Plate in similar fashion to last year, but Carpenter is confident (particularly after Saturday!) that, under weight for age conditions, she would reign over Arrogate.

Does it really matter though? Certainly not to the 21,000 patrons at Flemington on Saturday – the biggest Turnbull Stakes day crowd in eight years – nor for the record numbers that are poised to jam into Moonee Valley for the Cox Plate on 28 October.

They, like all of us, just seek to be in the presence of greatness.