Golden Buy Is A Wise Choice 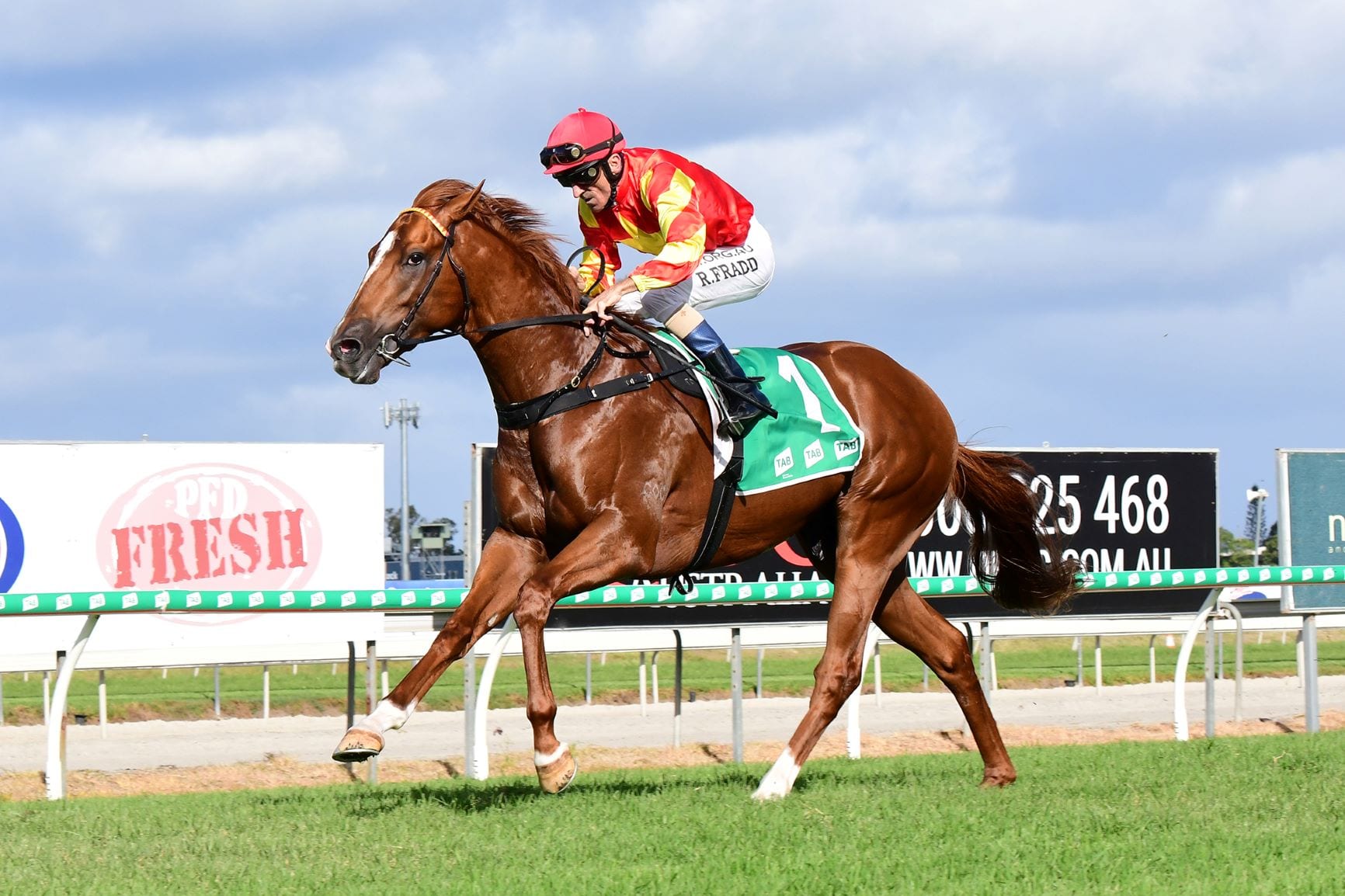 Wisdom of Water leads all the way to win by a comfortable 2.8 lengths in the Group Three Ken Russell Memorial at the Gold Coast (Trackside Photography)

There was something extraordinary about the way Wisdom of Water shot out of the gates in the Group Three Ken Russell Memorial over 1200m at the Gold Coast on Saturday. Almost like a dam bursting.

In fact, the barriers were about the closest they got to Wisdom of Water and the flashy chestnut colt would lead throughout notch up his first win at black type level, scoring by a more than comfortable 2.8 lengths.

Courtesy of Saturday’s victory, Wisdom of Water has shortened dramatically for the Group One JJ Atkins Stakes over 1400m at Eagle Farm on 6 June and, according to co-trainer, Toby Edmonds, his speedy colt is “a bit quirky, but getting better”.

That’s certainly music to the ears of Wisdom of Water’s owner, Mr An Zhiqiang, the Chinese based investor who races his horses under the ‘Golden East Horse’ banner and watched with interest, albeit from afar, as the 2YO spreadeagled his rivals at the Gold Coast.

Closer at hand, but equally thrilled, was Aquis Farm which had purchased a 50% share in Wisdom of Water just three days prior to the race.

Operating from Inner Mongolia where he owns 160 horses – roughly half of them broodmares – Mr An currently races 20 gallopers in Australia from stables in Queensland, NSW and Victoria.

While Mr An also sources bloodstock from Europe and North America, his major focus is on the Australian market.

A key investor at Australian sales for around five years, Mr An spent nearly $2 million on yearlings in 2020, including the well-related Redoute’s Choice colt, from Bhima Thoroughbreds, for $1.1 million at the Gold Coast Magic Millions Yearling Sale in January.

Conversely, Wisdom of Water was purchased for considerably less … snapped up by Stuart Boman of Blandford Bloodstock, on behalf of Mr An, for just $70,000 at the corresponding sale last year.

“The win on Saturday was one of our biggest successes on the racetrack and he’s clearly a very impressive racehorse,” a delighted Mr An, points out. “It’s an interesting story behind his sale … the colt was originally passed in for $65,000 and then Stuart Boman approached me and said what a well balanced horse he was and so we went back to (vendor) Eureka Stud and bought him for $70,000.

“The plan was to take him to China, but at the time there were problems with transporting horses between Australia and China so we decided to leave him here and put him with Toby and Trent Edmonds.

“After he was broken in, Toby said he should be an early 2YO and he made his debut in November. We didn’t have overly high expectations at first, but he’s turned out to be something of a star.”

A major property developer, Mr An first commenced his bloodstock business 10 years ago, but the passion for horses is lifelong.

“Horses are very much part of our culture in Inner Mongolia and I’ve been around them since I was a child,” Mr An reveals. “I race horses in China under Mengjun Horse Industry and we’ve been fortunate to have quite a bit of success, but had been eager to become involved with the Australian thoroughbred industry for quite some time.

“Australia provides a great platform for Chinese to invest in and be part of.

“Everyone we’ve encountered is professional and it’s very easy to buy horses there, while the prizemoney is incredible and obviously a great incentive.

“Wisdom of Water cost $70,000 as a yearling, has already won over $300,000 and there’s tremendous residual as a stallion, particularly if he were to win the JJ Atkins.

“It’s all very exciting, particularly as we have some other promising young horses coming through.

“There is a very good relationship developing between the thoroughbred industries in China and Australia … a relationship that I’m sure will continue to grow in a positive manner in the years to come.

“I’m really looking forward to the next couple of seasons.”

Wisdom of Water hails from the first crop of Vinery Stud’s Headwater, and becomes the initial stakes winner for the Exceed And Excel stallion.

Wisdom of Water earns the first black type too for winning Royal Academy mare, Regal Tier, a half sister to the multiple stakes winner of nine races in Tierqualo.

Eureka Stud, breeder of Wisdom of Water, purchased Regal Tier privately from breeders/owners Peter and Brenda Breen in 2015 and sent the mare to Eureka’s Spirit of Boom for the first two seasons, resulting in the winning fillies, Animal Spirits and All Boom.

Wisdom of Water was foal #3.

“We got approached by Kelly Doughty about buying Regal Tier from Peter and Brenda,” Eureka Stud’s Scott McAlpine recalls. “Kelly has trained a lot of good horses from the family on behalf of the Breens, including Tierqualo, (multiple stakes placed) Black Cash and (stakes winner) Flamboyer and, as a matter of fact, we’ve got Flamboyer’s mum, Zedatier on farm.

“We ummed and ahhed for a while about buying Regal Tier, but she’s turned out to be a very good mare with three winners from as many to race.”

After missing to Spirit of Boom, Eureka Stud decided to offer Regal Tier – in foal to Headwater – at the 2019 Inglis Digital April Monthly Sale but passed her in when she failed to reach her $15,000 reserve.

“How smart are we,” McAlpine says with a laugh. “Regal Tier produced a cracking Headwater colt last August and, on the back of Wisdom of Water, I’d suggest he’d be a walk up start for next year’s Gold Coast Magic Millions Yearling Sale.

“Regal Tier missed to Encryption last spring, but I phoned up about three weeks ago to book her back into Headwater.

“Fingers crossed that Wisdom of Water comes out now and wins the JJ Atkins!”

HOOFNOTE: Mr An also provides an insight to how Wisdom of Water got his name: “Wisdom of Water is the English translation of an old Chinese phrase, which basically says that wise people have good temperaments, are quick to react and active in thinking, just like water flowing. I’ve always loved the saying and it was hard to resist naming the horse Wisdom of Water when his sire is Headwater.”