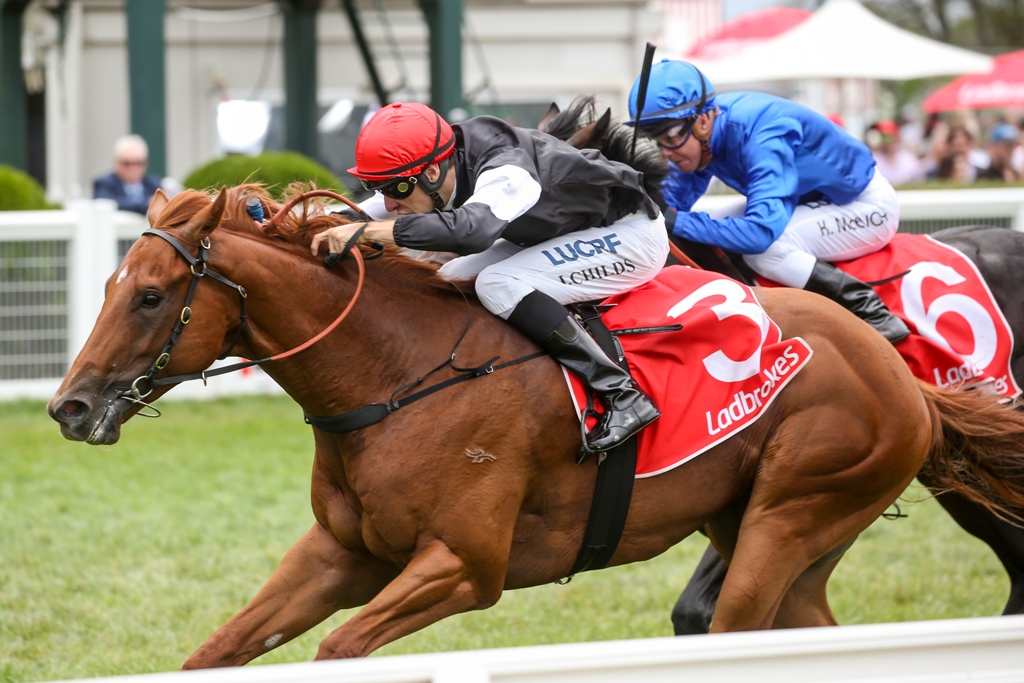 The victory of Written By in Saturday’s Group Three Ladbrokes Blue Diamond Prelude for Colts & Geldings over 1100m at Caulfield truly was a family affair.

The unbeaten colt has put his hoof up for the $1.5 million Group One Blue Diamond with an impressive display in the Prelude, jumping from the widest barrier, settling just off the leaders until turning for home, before pouncing over the final 200m to win with something left in the tank.

Written By – currently on the second line of betting for the Blue Diamond on 24 February – is the first stakes winner for trainer, Grahame Begg, since his stable shift to Victoria in 2016, while the Written Tycoon 2YO was bred by Begg’s father Neville, a Hall of Fame trainer in his own right.

This will be the first Blue Diamond runner for Grahame Begg, but he has saddled up two Golden Slipper runners, including Written By’s sire, Written Tycoon, who finished 11th behind Stratum in 2005 before what would become a hugely successful stint at stud.

Commencing his training career at Randwick in 1990 after Neville took up a six year stretch in Hong Kong, Begg has trained a host of Group One winners including All Silent, Secret Admirer and Our Egyptian Raine, whose daughter, the Stratum mare, Egyptian Symbol, ran second to Prompt Response in Saturday’s Group Two Yarraman Park Breeders Classic at Warwick Farm.

Begg also trained Monopolize, who notched up multiple stakes victories in Australia, along with successive Hong Kong International Bowls in 1995-96.

After taking an 18 month sabbatical from training, Begg is now based at Jonathan Munz’s Pinecliff property near Mornington racecourse, and currently has around 15 in work.

He’s realistic about Written By’s chances in the Blue Diamond, but believes the colt is in with a strong chance: “He’s got great determination this horse … no matter whether it’s a gallop, a trial or a race, he just wants to hit the line. A real racehorse,” Begg points out.

“My father bred him and he was offered at last year’s Inglis Melbourne Premier Yearling Sale where he was passed in (for $180,000). There was nothing wrong with him but I just don’t reckon Neville wanted to sell the colt. I don’t think mum spoke to him for a month, but he squared up by letting her name him,” Begg adds with a laugh.

“She (Yau Chin) only won a maiden at Newcastle, but had plenty of speed and would be beaten by the shortest of margins in several starts at Randwick and Rosehill,” Begg explains. “She had some issues and we retired her, but thought she deserved a chance at stud. Her name is Cantonese for “plenty money”.

“She might not have lived up to her name on the track, but who knows, she could make up for it as a broodmare.”

One of nature’s gentlemen, Begg began working for leading trainer, Maurice McCarten in 1945, at the age of 14.

Eventually taking out his licence in 1967, Begg rapidly became one of Sydney’s most prominent trainers with an unparalleled reputation for producing outstanding fillies and mares: the legendary Emancipation and 1980 Golden Slipper winner, Dark Eclipse, among them.

However, Begg trained many a top colt or gelding too, including Derby hero, Divide And Rule, Epsom winner, Dalmacia and another of his home-breds in Hit It Benny, winner of the Rothman’s 100,000 (now Doomben 10,000) and The Galaxy.

“I’ve been breeding for a quite a while and was involved with Colin Tidy and Dominic Beirne in the breeding of – and breeding from – that great mare St Klaire (dam of Group One winners Bonanova, Fraternity and Telesto),” Begg reveals.

“Written By has been a huge thrill and, in many ways, is probably my last throw of the dice at the breeding caper. I’m nearly 90 years old and I’ve only got the one other mare aside from Yau Chin.

“Written By’s yearling full brother was actually a nicer type and I went to visit him recently. Half an hour after I left, they rang to tell me he’d gone over a fence and broken his back. That’s the way it goes … plenty of highs and lows. Just makes you appreciate the ‘luck’ when it comes your way.

“Yau Chin has a lovely Fiorente colt but she didn’t get in foal last spring, so I’ll probably end up selling her some time this year.

“It’s been a wonderful run and would be a nice way to bow out if Written By wins the Blue Diamond.”

One thing is for sure, if Written By captures the Diamond, Yau Chin will make ‘plenty money’ in the sale ring!

HOOFNOTE: It truly was a red-letter day for Written Tycoon with Written By just one of three stakes winners at Caulfield for the Woodside Park based stallion.

Written By led the charge, but was soon followed by the Mill Park Stud sold/Barrie and Midge Griffiths raced 3YO filly, Booker (Group Three Kevin Hayes Stakes) and then, ultimately, via the Millar Racing and Breeding, bred and raced, Super Cash in the Group Two Schweppes Rubiton Stakes.