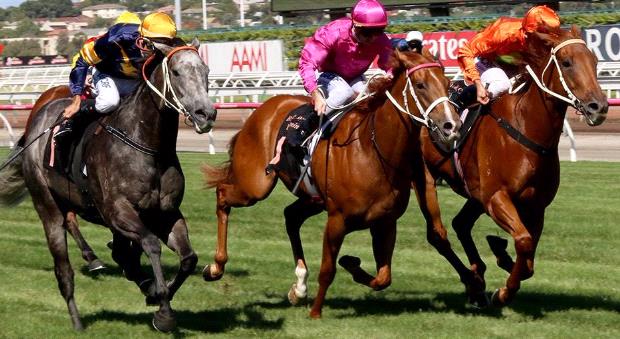 CHAUTAUQUA’s last stride win in the Lightning Stakes edged his earnings closer to $4 million and offered a reminder of the legacy of his sire Encosta De Lago.

This seasons yearlings are the last available with Encosta De Lago retired in 2015 after suffering fertility issues in 2014.

He has 99 individual stakes winners and moved to 228 stakes wins thanks to his brilliant grey son Chautauqua.

“He has been a great stallion for many years and it is tremendous to see a horse like Chautauqua still flying the flag for Encosta De Lago,” said Coolmore’s Michael Kirwin.

“It was unfortunate that we had to retire him but he has done more than enough, his record shows that.”

Chautauqua, by Encosta De Lago out of Lovely Jubly, enhanced his reputation as the best sprinter in the country by defeating Group 1 winners Terravista and three-year-old Japonisme in the Lightning.

It was his third Group 1 success, following previous wins in the TJ Smith Stakes and Manikato Stakes.

Racing To Win is the best performed Encosta De Lago in terms of Group 1 victories with five, followed by Princess Coup with four.

The Lightning Stakes was the first leg of the Global Sprint Challenge, a series that presents a US$1 million bonus to any horse that can win in three countries.

He is being targeted towards defending his TJ Smith Stakes crown during The Championships in Sydney and then a trip to  Royal Ascot, via Hong Kong for the Chairman’s Sprint Prize (1200m) on May 1, is being considered.