209 Still In The Blue Diamond Mix 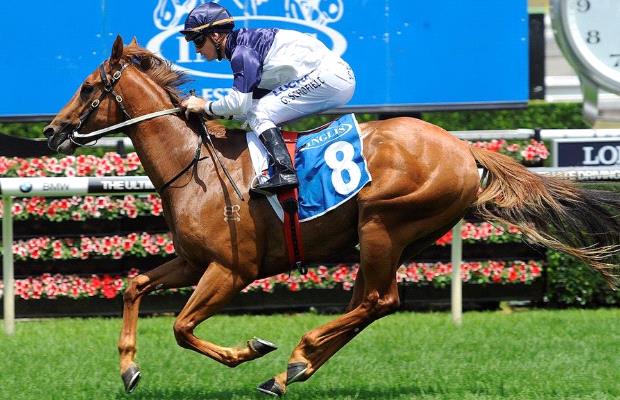 Although unbeaten star colt Capitalist was not among the second round of acceptances for the Blue Diamond Stakes, 209 two-year-olds still remain in contention for the first Group 1 of the juvenile season.

From an original record list of 1343 entries back in July last year, which saw an increase of 12% growth from 2015 nominations, the February 27 run 1200m race looks set to boast another quality field.

After producing Street Cry colt Pride Of Dubai to win as a maiden last year, Snowden Racing still have Gravitate, Defcon, Quick Feet and Reinforced among the 209 youngsters left in the $1.4 million Group 1 race.

Training partners David Hayes and Tom Dabernig have 23 in contention, while John O’Shea and the Godolphin team have 20 with Caulfield-based Mick Price having 18, including Extreme Choice (Not A Single Doubt), an impressive two length debut winner of the Inglis Nursery, currently the Blue Diamond favourite (pictured).

On the stallion front Exceed And Excel, who sired Earthquake to win the race two years back, leads the way with 14 entries, with Snitzel and Sebring having 12 and 10 respectively, while the colts and geldings outnumber the fillies 117 to 92.

Saturday’s impressive Randwick winner Tessera (Medagliad’Oro) is one of the 20 strong Godolphin stable still in contention and after his debut victory, connections may consider sending the colt to Melbourne for the race.

After the victory trainer John O’Shea said Tessera is now likely to have his next start in the Group 3 Canonbury Stakes (1100m) at Rosehill Gardens in two weeks.

“Tessera will go on from this race and make good improvement,’’ O’Shea said.

“Just where he sits, we’ll find out after that.”

Ready to take on the might of Godolphin is trainer Jason Warren who has The Seductress as his lone runner left in the acceptances.

A pleasing third on debut, the Snitzel filly has since put together back to back victories highlighted by an impressive performance at Caulfield over 1000m.

Likely to head to the Group 3 Blue Diamond Preview for fillies on January 26 at her next start, if all goes well, the filly will then progress towards the Prelude in February.

While the stable were slightly non-committal after her most recent win, the opportunity to aim for Group 1 glory could be something her connections simply can’t ignore.

“Jason will have that call [on whether she contest the Blue Diamond], he added. “She’s very genuine, well educated, and does everything right. We’ve always had an opinion of her.”

The complete list of Second Acceptances for the $1.4 million Group 1 Blue Diamond Stakes (1200m) can be viewed here.