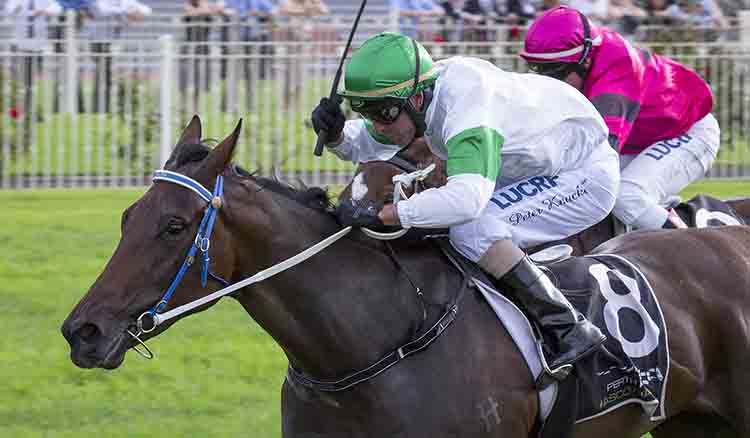 Alan MacAlister is one happy Scotsman and you don’t need to be McEinstein to work out why.

On Saturday, MacAlister and his clan – including wife Birgitt, son Cameron and daughter Kirsty – walked away from Perth’s Ascot racecourse with a stakes double following victories to Magnifisio (Sheila Gwynne Classic) and 2YO sensation, Whispering Brook (WA Sires’ Produce).

All in all, a good day’s play.

MacAlister was understandably pleased to watch Magnifisio return to the form that saw the Magnus mare take out the Group One Winterbottom Stakes in November 2014, but admits to some nerves by the time Whispering Brook’s race came around.

After all, the Hinchinbrook filly was unbeaten from four starts – including the Group Two Karrakatta Plate at her most recent outing – and was seeking to emulate Perth legends, Burgess Queen and Bomber Bill, by remaining unbeaten at two.

“I knew they would take her on,” MacAlister said. “She usually races on the pace but this time she sat back and copped some stick. Still, she was too good for them in the end and we all breathed a sigh of relief when it was over.

“Whispering Brook will now head out for a spell and we’re weighing up our options. As she is trained by Simon Miller, who is part of the Aquanita Racing network, she might race in the eastern states as a 3YO, but ultimately I’d like to target a race like the (Group One) Railway Stakes with her.

“As for Magnifisio, there are some good races coming up and, based on Saturday’s win, she’s far from a  spent force.”

Magnifisio, a 6YO mare, has now won over $1.4 million for the MacAlisters.

MacAlister and his wife have owned horses for over 30 years and had considerable success as members of the Royal Ascot Racing Club which has raced such luminaries as 2005 Epsom Derby winner Motivator (sire of World Champion and dual Arc de Triomphe winner, Treve).

The couple also had a small breeding operation in Ireland before taking the plunge and moving to Perth 12 years ago, buying a 100 acre property to cater for their mares and foals.

The MacAlisters also own two stallions in My Admiration and My Atacanta, albeit standing at other West Australian farms.

“I brought My Atacante out from Ireland and he won several races in Perth before heading off to stud: he’s by the Mr Prospector horse, Traditionally and has a handful of winners despite limited numbers.

“My Admiration is by Encosta de Lago and he won over $HK8.5 million in Hong Kong. His oldest are weanlings.”

However, while we’ll have to wait to see whether they capture our admiration, MacAlister’s racehorses definitely have.

With some 20 in work, MacAlister has also enjoyed success with 2016 Group Two Blamey Stakes winner He Or She and dual stakes winner Dawn Approach, which all makes for a sizeable trophy cabinet.

Based on current form, the amiable Scot might just have to build an extension.