A Rose Is A Rose, Is A Yankee Rose 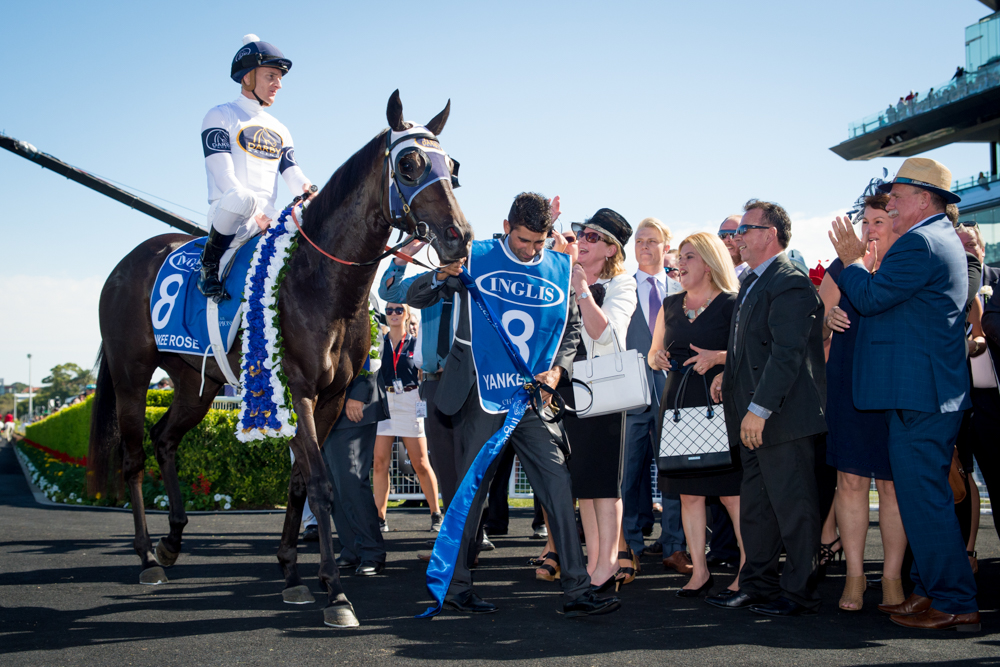 Yankee Rose’s victory the $1m Inglis Sires’ at Randwick on Saturday was a triumph on so many fronts.

Who didn’t get a little emotional themselves when the emotional and highly regarded David Vandyke was interviewed post race.

His struggle with mental health issues has been well documented, but Yankee Rose’s thumping win is much more of a bed-time story: “once upon a time there was this little filly with a huge heart takes on the boys from the rich end of town to win a prestigious juvenile Group One”.

The story might also include how the same filly came close to winning a Golden Slipper and is now the clear favourite to win the Champagne Stakes. Gripping stuff, but maybe not so stark as the reality that her residual value as a broodmare has already moved into another stratosphere which is all the more amazing given that all she cost as a yearling – at the 2015 Inglis Sydney Classic – was $10,000.

What’s even more fascinating is that the runnerup, Telperion, is bred and raced by Darley, one of the richest investors in the history of thoroughbred racing.

Who said racing isn’t for everyone?

Meanwhile, the trainer has been at it for 29 years, give or take a break or two. Hugely popular among his peers, this was his first Group One victory.

The best part of all is that the fairytale wasn’t confined to the east coast, with celebrations akin to those at Royal Randwick experienced at Geisel Park in Western Australia, which only last month secured Yankee Rose’s sire, All American, to stand at its stud from the 2016 season onwards.

At the very least, Yankee Rose will be crowned Australia’s Champion 2YO Filly, while All American has now moved into the top three on the nation’s 2YO Sires’ premiership.

Not surprisingly, the mobile phone of Geisel Park’s owner, Eddie Rigg, has almost gone into meltdown since Saturday afternoon with the elated Rigg saying: “It’s a tremendous result for the West Australian industry.

“I had calls from NSW and Victorian studs wanting to buy him back after Yankee Rose ran second in the Golden Slipper … and quite a serious approach from the east directly after she (Yankee Rose) won the Sires’.

“But I can assure you that All American isn’t going anywhere. We put a $10,000 (plus GST) service fee on him and offered 15 introductory nominations at $7,000. They were taken up straight away so we added another 10, and most of them have gone, too.”

A Group winner at two, Group One placed at three and winner of the Group One Emirates as a four year old, All American stood for six seasons at Arrowfield Stud (Yankee Rose is from his third crop) prior to his re-location to Geisel Park.

“He’s by Red Ransom from the Strawberry Road mare, Milva (who has also produced multiple Group Two winner More Strawberries) and will be an ideal cross for all the mares by Blackfriars (Danehill) over here in WA,” Riggs adds.

Rigg’s phone isn’t likely to stop ringing anytime soon either with Team Yankee Rose confident she will also go close in the Group One Moët & Chandon Stakes over 1600m at Royal Randwick on 16 April.

“She won (the Sires’) with a leg in the air when Zac (Purton) let her down and will be getting weight off the colts again in Champagne,” Rigg pointed out. “Zac also said she will lap up the extra furlong.”

Win, lose or draw in the Champagne, Yankee Rose has proven to be a life-changer. And that, by any other name, is a rose.