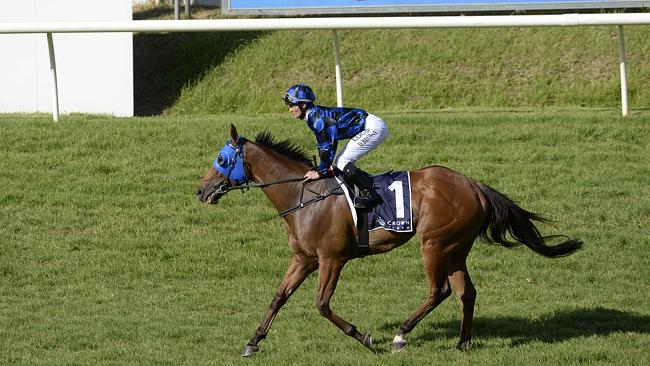 He’s never been ranked No.1, but his racing record is better than those who have.

He’s 100% Queenslander, but he’s loved wherever he goes.

If Buffering was human he would probably receive the great Australian accolade: he’d be a good bloke.

Even his trainer Rob Heathcote has trouble nailing down what it is that makes Buffering the best horse he’s trained and one of the best he’s seen.

“I know how I feel about him and what he means to me,” Heathcote says.

“But it’s difficult to put into words exactly what it is about him. I’ve trained seven or eight hundred of them and I’m absolutely in awe of this one.

“The only thing I know for sure is that it’s certainly got nothing to do with me. I’m just the manager.’

“You can call him honest and brave and all of that, but in the end he’s just a wonderful, wonderful horse.”

It was his 31st Group 1 race, his sixth win at the top level and it took his racetrack earnings to almost $6 million.

And he did the job as he mostly has in his 50-race career. From the front.

“Here I am, have a crack if you think you’re good enough.”

Buffering is the highest stakes winning sprinter in training in Australia, and among all active horses only Criterion has won more money.

“Maybe, just maybe, when he’d won his third Group 1 in a row two years ago, he could have been classed as the best sprinter in Australia,” Heathcote says.

“Maybe Lankan Rupee had the edge on us, maybe some of the others have won races at the right time and got the headlines, or there might be a feeling that he’s been around so long and been so reliable that he’s sort of taken for granted.

“He just keeps coming up, his durability is amazing.

“And he knows how to race, he really knows his job.”

Buffering won his first four races at home in Queensland and six of his first nine, including the Group 3 Roman Consul Stakes at Randwick in October 2010.

His first attempt at a Group 1 came in the Coolmore Stud Stakes at Flemington soon after. He finished fourth to Star Witness and it took him another three years and 16 more tries to break through for that first big one.

He’s now collected half a dozen, he’s also run 13 other Group 1 placings and he’s earned a cheque in all but one of his 31 Group 1 starts. And he’s won five Group 2s and a Group 3 as well.

As impressive as the stats may be, for Heathcote one of the greatest things about his horse is the amazing acceptance of him throughout Australia.

“There’s a kind of avalanche of goodwill that he generates wherever he races,” he says.

“Here I am in Perth and people in bars are singing out ‘go The Buff’ and they’re coming up to me and asking me how he’s going,

“It’s been the same in Melbourne since the first time we went down there.

“They seem to love him there more than what they do in Queensland.

“Maybe Aussies just love the underdog. It took him 17 goes to win his first Group 1 and even though he’s won six now, the public still sort of remembers him for all those times he was running into Black Caviar and Hay List and those other top horses.”

The Winterbottom win has brought the prospect for Buffering of another international campaign, to follow his Hong Kong trip of last year. This time Dubai and possibly Royal Ascot are the possible destinations.

“The Dubai people contacted me last week and asked if we’d be interested. I said ‘why wouldn’t we’,” Heathcote said.

“I know it isn’t as simple as that. We have the big Magic Millions meeting at home in January which is a priority.

“But if he’s in good shape we’ll give it plenty of thought.”

Such a trip would complete a journey that began when agent Paul Willetts paid a modest $22,000 for the son of Mossman (pictured below) at the 2009 Magic Millions QTIS Sale.

“He had this bloody great bandage on his hind leg, but we had a look underneath it and there was only a fairly minor abrasion,” Heathcote said.

Buffering is the third eight-year-old, along with Fawkner and Mourinho, to have won a Group 1 race in Australia this season, and Heathcote is conscious that it is late in the game to be embarking on foreign missions.

“Buffering is a once-in-a-lifetime horse and he won’t be exploited,” he said.

“At this stage I’m happy that he’ll have no problem. He’s a very good traveler, he’s sound and he showed on Saturday that he’s racing as well as ever.

“I’ll know when the time has come, I’ll know when he puts in that flat run. He’ll look me in the eye and tell me he’s had enough.”