Another Ace For Cordina – Too Soon To Tell 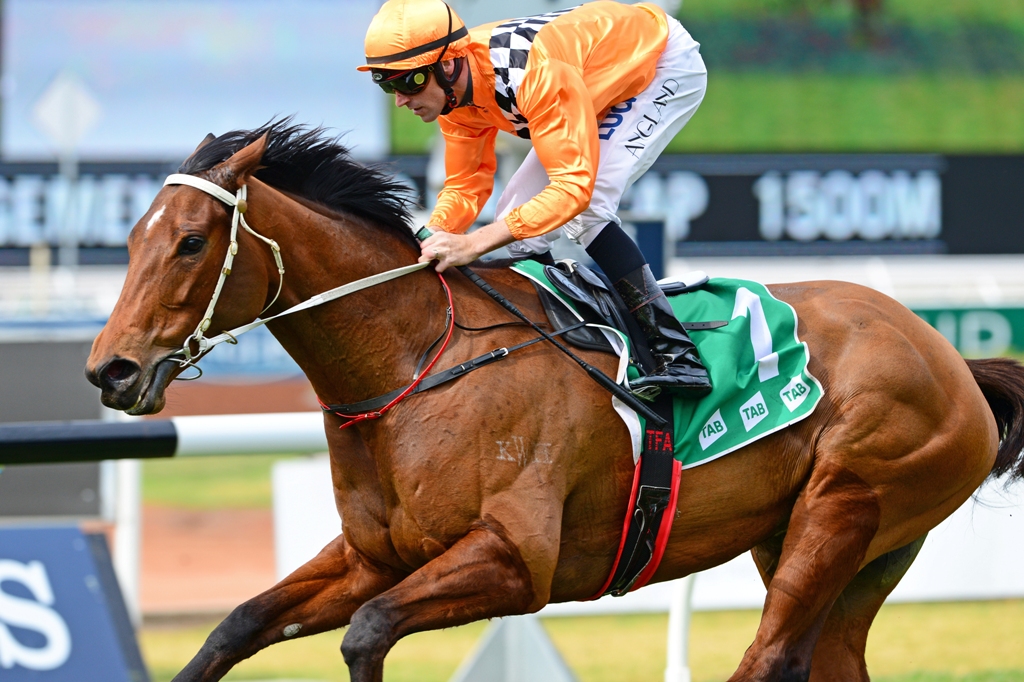 All Too Soon cruises to victory at Rosehill (Lisa Grimm)

However, it’s easy to tell Cordina has a real soft spot too for his bonny mare, All Too Soon, winner of Saturday’s Hachem Management Group Handicap over 1500m at Rosehill Gardens.

Once considered a contender for the Group One ATC Oaks in April, following on from some strong wins at Royal Randwick and at her home track of Rosehill Gardens, All Too Soon was injured in the Group One Vinery Stud Stakes at the end of March.

All Too Soon would reappear with an eye-catching fifth at Rosehill two weeks ago and Saturday’s two and a half panel romp takes her tally to four wins and four placings from only 12 outings.

“She (All Too Soon) is going superbly and is only going to get bigger and better from here,” Cordina enthused. “I spoke to (trainer) David (Payne) on Sunday morning and we’re likely to back her up this Saturday to get her rating up. She ate up well after the race and looks like she is well and truly over the sprained hock she suffered in the Vinery.

All Too Soon is by the Vinery Stud based All Too Hard (who completed a Rosehill double with Za Zi Ba) from the Galileo mare, Gallant Tess, who likewise raced in Cordina’s increasingly familiar orange silks with black and white checked sash and, obligingly, has also produced Sydney stakes winner Rock Hero (by Fastnet Rock).

“I ended up passing in All Too Soon at the 2016 Inglis Australian Easter Yearling Sale (for $230,000 off a reserve of $300,000),” Cordina explains. “She was a big girl and I believe that a lot of buyers go shopping for 2YOs at Easter and she was never going to race at two. Anyway, I was OK about passing her in.

“The year younger Snitzel half sister, Tatiara, was sold at Easter to Robbie Laing and I retained a share which is very fortunate because she won against a very competitive field at Cranbourne on Sunday. It’s been a big 24 hours!

“Tatiara’s 2YO full brother had some minor X-ray issues and have decided to keep him … he’s called Crown Affair and just entered David (Payne)’s stable who has a huge opinion of him. I said to David that he hasn’t even had the colt for a full prep, so how can he tell? David said “I can tell!”.

“Gallant Tess foaled down another Snitzel last spring, but missed last year and will be covered by Merchant Navy this time around. He’s a terrific type and the resultant foal would be a three quarter to Rock Hero.

“I still own Rock Hero who stands at Chris Bakker’s Lauriston Park in Victoria and his first crop have only just turned two: I’ll be racing some of his progeny with David Hayes.

“Certainly the last 48 hours have been a tremenous boost for Rock Hero with All Too Soon and Tatiara.”

Not surprisingly, Cordina is eagerly awaiting the coming spring for his blue riband winner, Ace High, who resumed in last week’s Group One Winx Stakes after last being seen finishing a lip second to Levendi in the Group One ATC Derby in April.

“He (Ace High) will race again this Saturday in the (Group Two) Chelmsford Stakes (over 1600m at Royal Randwick) and, all going according to plan, will be set for the Caulfield Cup and Cox Plate and possibly the Melbourne Cup.

“An exciting few months ahead hopefully.”

HOOFBEAT: A victory by Ace High in the Chelmsford would give Cordina his second success in the race after Gallant Tess won in 2008.