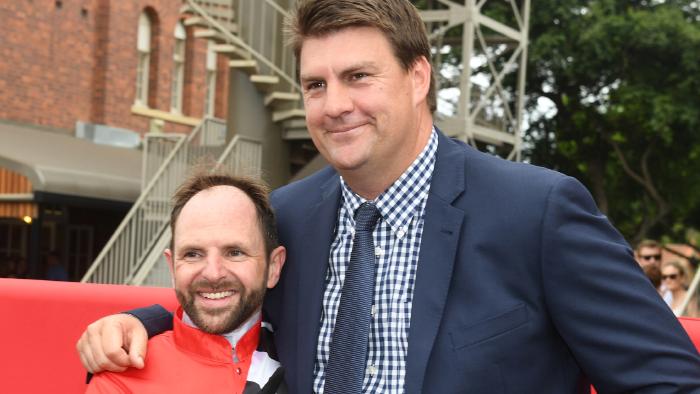 Chris Anderson could be forgiven for briefly losing his composure in the minutes following the $100,000 Colin McAlpine AM Memorial Classic (1200m) at Eagle Farm on Saturday.

Anderson had only just recorded his first black type victory as a trainer with 5YO, Elegant Composure, and while the mare successfully held off rivals in a dominant fashion, Anderson was having a lot more trouble holding back the tears.

Little wonder. It’s been a hectic five or so years for Anderson who kicked off with just the one leased horse and big dreams: “I used to work as a manager for a national beer brand and I’d spend a lot of time flying around and having a few beers with publicans all over the country. Every Aussie male’s dream job, right?,” Anderson laughs. “I had a pub at one stage too, but while I enjoyed what I was doing, there was always a real passion for the thoroughbred industry.

“I’m not sure where that comes from … I’ve got a cousin, Steele Ryan, who is a trainer, but I didn’t grow up in a racing family like a lot of other people involved in horses. I just knew I had to give it a try.

“People thought I was crazy: at one stage I was working for free in the stables of a morning, working full-time at my paying gig, had three kids under three at home, and was doing a course at nights in Equine Science.

“But it has all started coming together … I couldn’t have done it without my wife and children being so supportive, but I’m also mightily grateful for the advice and helping hands from people in the industry. I’m now starting to get quite a few owners on board (Anderson trained a winner, Subsolar, for Dato Tan Chin Nam at the Sunshine Coast on Friday night), so you can see why Elegant Composure’s win was pretty special.”

Glenlogan Park’s Steve Morley adds that Anderson’s success is well deserved: “He’s a tremendous bloke, very well liked by his peers, and I wasn’t the only one cheering on Elegant Composure,” Morley enthused.
“A mutual friend put us in touch before Chris started training and he came out to the farm to have a good look around. I told him back then that while a lot depends on finances, much of it boils down to commitment and, in that regard, he’s definitely got his head and heart in the right place. Chris was prepared to put in the hard yards and, initially at least, did it just to get the experience. He’s exactly what this industry needs.

“Chris came up to me after the 2013 Gold Coast Magic Millions National Yearling Sale and asked if I had anything for him. I understand a horse he’d bought had gone amiss, so I told him about this Bradbury’s Luck filly we’d passed in, explaining that she was going to need time but was a really nice type. He purchased the filly from us and then started getting potential owners to come up to the farm and have a look. I’m sure they’re all happy now that they did!”

Elegant Composure didn’t have a start until she was a spring 4YO (“she had a couple of paddock accidents which put us back a bit,” Anderson explains) but it was well worth the wait as the flashy bay won her maiden on the Sunshine Coast before reeling off a further five straight victories, including two in town.

The mare’s first tilt at black type – in the Group Two Dane Ripper back in June – resulted in a midfield finish, but she rectified that on Saturday in her first outing in 24 weeks.

HOOFNOTE: Anderson reveals that, all things being equal, Elegant Composure will next start in the $100,000 Just Now Quality at Eagle Farm on 10 December … somewhat fitting given that Oaks winner, Just Now, was bred by the person whom last Saturday’s race was named after.

Colin McAlpine passed away in August 2016 after a lifetime dedicated to the thoroughbred industry, both in Queensland and nationally: for 13 years as Chairman of Thoroughbred Breeders Australia.

McAlpine’s son, Scott, points out that Colin, as a Life Member of Tattersalls, would have been honoured to have the race named after him, but was unlikely to have backed the winner: “We (Eureka Stud) had Notonyourlife in the race but probably lost any chance when it rained earlier in the day. I know dad would have much preferred it rained at our farm and not at Eagle Farm!”