Another Australian-bred Star In South Africa 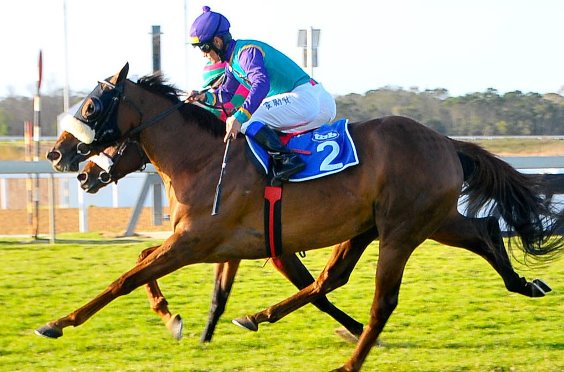 The incredible run of success by Australian-bred gallopers in South Africa continued last Friday with Acrostar winning her second stakes race in the Listed Jockey Club Stakes at Fairview.

Trained by Justin Snaith, the now 6YO daughter of Danehill Dancer has won six and placed on 10 occasions for over R600,000 in prizemoney.

The 2000m contest was a real fight to the finish with Acrostar getting the nod right on the wire after surging over the closing stages.

Already a stakes winner at Kenilworth in 2014 and multiple Group placed, Acrostar was purchased by James Bester – on behalf of leading South African owner, Sabine Plattner – for $340,000 at the 2012 Inglis Australian Easter Yearling Sale.

It might have been a while between black type drinks, but the victory came as no surprise to Acrostar’s breeder, Steven Dillon.

“I thought the 2000m would suit her right down to the ground,” Dillon points out. “I get regular emails from the connections and her last couple of runs had been very promising. It’s terrific to see she has won another black type race for them.”

Dillon had originally planned to send Acrostar’s dam, Nova Star, to Fastnet Rock but decided to switch over to Danehill Dancer for the Champion stallion’s last season at stud.

“I’d sent her (Nova Star) to Redoute’s Choice that first year but the foal died within 24 hours. However, I also liked the Danehill Dancer cross as (3-time Group One winner) Private Steer is bred along similar lines.

“It certainly appears to have worked in Acrostar’s case anyway!”

An architect based in North Queensland, Dillon has raced a few horses over the years and dabbles a bit in the breeding game, but the Nova Star ‘connection’ has been memorable to say the least.

“My company is the architect for the Townsville Turf Club and the plan was to race a couple up here with some mates, but they’ve all been city class to date and haven’t raced this far north,” Dillon adds. “Nova Star was pretty special. There were quite a few first time owners in that mare and she was a lot of fun. (Group One) Winter Stakes, a (Group Two) Queensland Guineas, a (Group Two) QTC Cup. Fantastic horse.

“I’ve always had a bit of an interest in the breeding side of things, but Nova Star’s High Chaparral 2YO colt is the only horse I’ve got at the moment … there’s been quite a bit of interest in him as well.

“We sold Nova Star at the Magic Millions National Broodmare Sale last year (for $250,000 to the China Horse Club) in foal to Pierro. She’s a great mare and I hope she continues to have success for the new owners.”

Nova Star is currently in foal to Newgate Farm based stallion, Deep Field.

As for Danehill Dancer, Acrostar is one of 172 individual stakes winners world wide for the now retired son of Danehill, which includes the globe-trotting sprinter and now leading stallion, Choisir, who sired Saturday’s Group Three McNeil Stakes winner, Defcon.

Acrostar is one of three Australian-bred black type winners by Danehill Dancer in South Africa, including Group Two winner, Ovidio.

“Acrostar was a good yearling and sold accordingly,” Coolmore Australia’s Sales, Marketing and Racing Manager, Sebastian Hutch, recalls. “She was a sweet, fluent mover with lots of scope and a great outlook, so it’s no surprise to have seen her develop into a very smart race filly.

“James (Bester) is a fantastic judge and it’s always a great endorsement when a guy who has bought so many quality horses over the years, selected her.

“Importantly, graduates of the farm have enjoyed a particularly good run in South Africa of late with Enaad being crowned Champion Stayer for the season and Mac de Lago claiming a Group One, so it’s great to see Acrostar continue to add to the tally. Hopefully there are more wins in good company in store for her.”