Another ‘Win’ In Golden Horseshoe Series 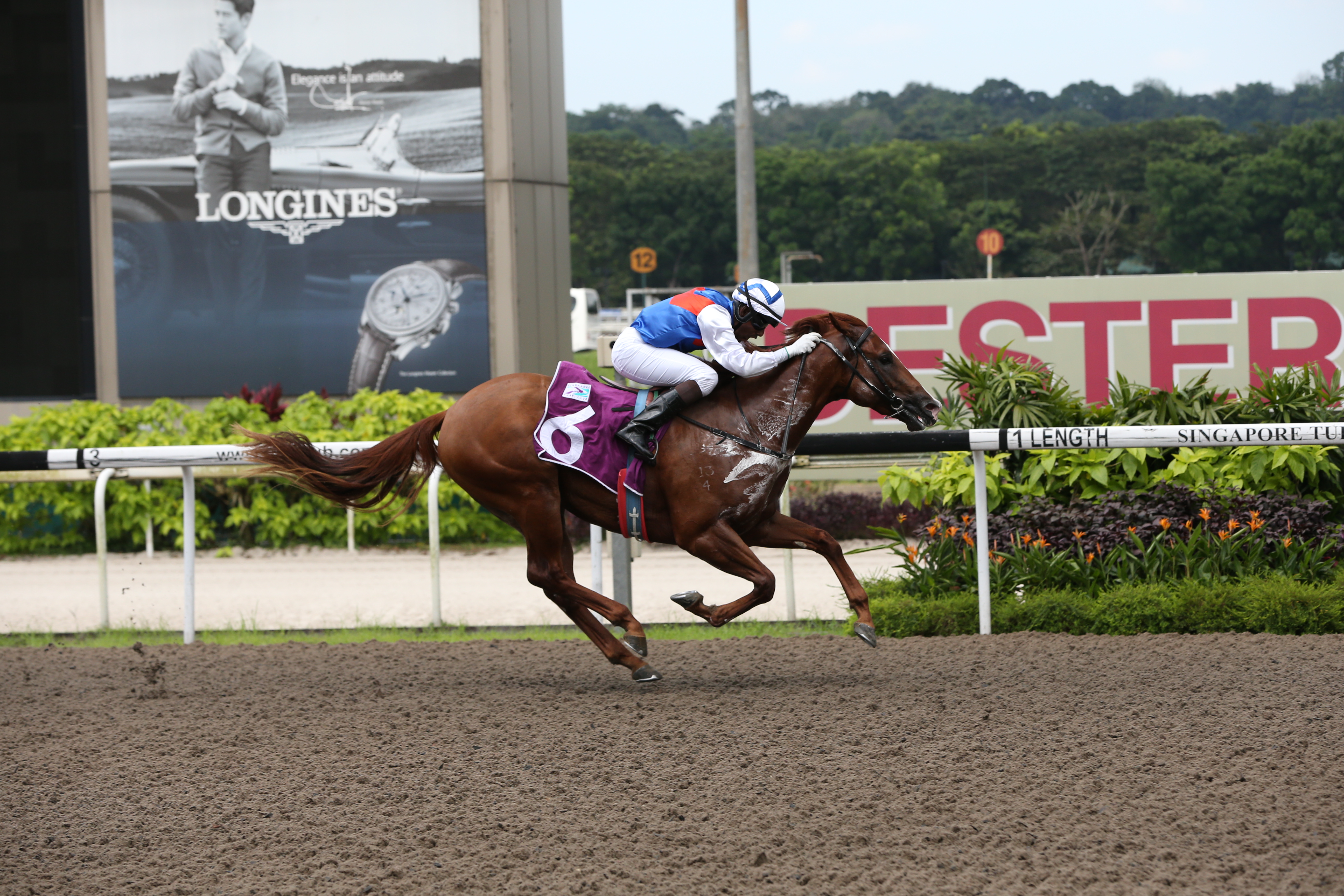 Following on from the success of Charger in the first leg of the 2017 Aushorse Golden Horseshoe Series, another Australian-bred in Whistling Win took a second picket on Sunday by capturing the Singapore Silver Horseshoe over 1000m at Kranji.

Trained by Leticia Dragon, Whistling Win was actually a rank outsider for his racetrack debut but proved to be every inch the winner as the flashy chestnut was two lengths clear at the wire.

Bred by Basil Nolan’s Raheen Stud in Queensland, Whistling Win was orginally offered at the 2015 Gold Coast Magic Millions National Weanling Sale where he was knocked down to Rushton Park for $28,000. Next port of call was the 2016 Adelaide Magic Millions where he was picked up by Woodpark Stud for $47,500, before eventually heading to the 2016 Magic Millions 2YOs in Training Sale, bringing $80,000 after catching the eye of what would be his new Singapore trainer.

A son of the winning Dodge mare, Alyssa Jean, Whistling Win is a half brother to two other winners including Brisbane stakes winner, Too Good To Refuse.

Adding the cherry on top for Nolan, who is also Chairman of Thoroughbred Breeders Australia, Whistling Win is by Raheen’s Golden Archer, a 5-time stakes winning son of Rock of Gibraltar and currently Australia’s second leading first season sire by winners.

And while Nolan was happy to chalk up another winner for his stallion, he clearly has a soft spot for the family.

“We sold a full brother to Whistling Win to Desleigh Foster for $100,000 at the Gold Coast Magic Millions in January, she produced a full brother to Too Good To Refuse last spring and is now in foal to Deep Field,” Nolan points out.

“Raheen also has Whistling Win’s grandmother, Conquered, on farm and she’s now a nanny for the foals, but what a great mare she’s been.

“I had bought two mares from Woodlands Stud in 2001 and their bloodstock manager, Trevor Lobb, was trying to talk me into buying a third mare, who was in foal to Commands. That turned out to be Conquered and they were asking $15,000 for her. I really didn’t want to fall for the old three card trick, but I eventually relented.

“I’m happy I did because her Commands foal was sold to Rick Worthington for $135,000 and he turned out to be War of the Worlds, who won a stakes race at Randwick before Rick sold him to Hong Kong for a million dollars. Racing up there as Royal Delight he won a stakes race in track record time.

“I’m pretty glad I listened to Trevor!,” Nolan adds with a laugh.

It turned out to be a very successful Sunday for Raheen ‘exports’ with the Tan Hai Wang trained, Happy Saga (by Real Saga) making it a double on the Kranji program, while Ambitious Heart – a Captain Sonador 3YO which Nolan sold for $170,000 – won in Hong Kong.

Dragon appears destined to have become involved in racing: her grandfather was a jockey, so was her father Douglas and uncle Chris. After completing a 12 month training course at the Gold Coast, including a stint with Gillian Heinrich, Dragon returned to Singapore as her father’s assistant trainer, taking over the reins – so to speak – when Douglas retired in 2011.

Dragon was also the trainer of Rising Empire who won a leg of the Golden Horseshoe Series five years ago, but is aiming higher this time around.

“Whistling Win has shown promise from day one,” Dragon enthused. “I’ve got a couple more 2YOs coming around, but he was the one that was most forward. It’s too early to tell at this stage, but I had a pretty good 2YO in the past in Rising Empire and I hope this one can make it too.”

HOOFNOTE: 2016 Group One Queensland Derby winner, Eagle Way, may well be on target for a return trip to Australia after winning the Group Three Queen Mother Memorial Cup over 2400m in Hong Kong on Sunday.

A son of More Than Ready who was purchased from the Segenhoe draft at the 2014 Inglis Australian Easter Yearling Sale by George Moore, for $200,000, Eagle Way was originally left in Australia where he was trained by Bryan Guy, winning the Derby and three other races.

Eagle Way was sent to John Moore’s stable in Hong Kong and has subsequently raced six times at Sha Tin, winning last December over 1600m before his emphatic win in the Queen Mother.

Eagle Way will now head to the final Group One of the Hong Kong racing season – the Chartered Champions & Chater Cup (2400m) on 28 May – but Moore has suggested his stayer’s ultimate targets could be the Caulfield and Melbourne Cups.