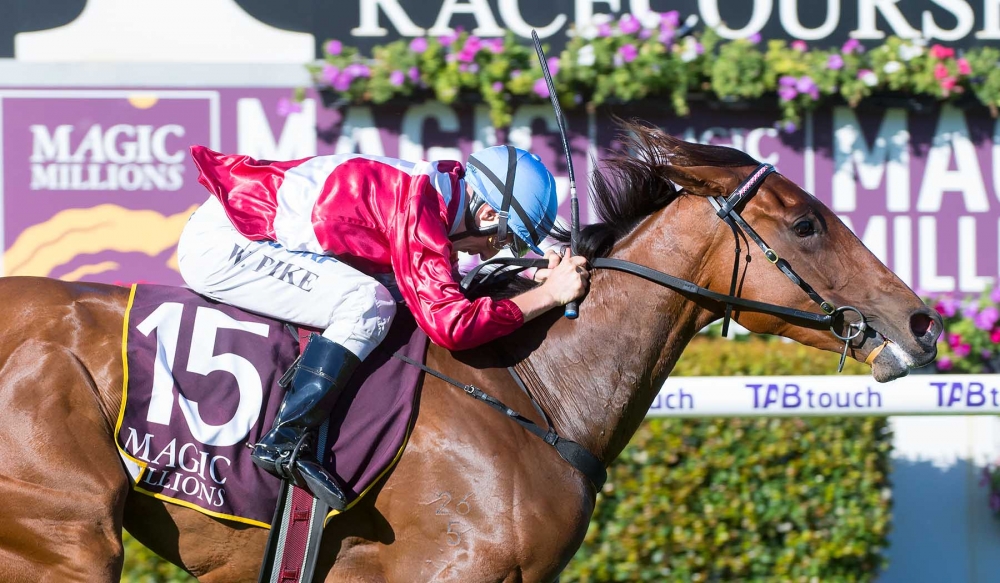 A Group One victory of any stripe is a prized possession. No question about it.

That said, there is no denying some Group Ones were created more equal than others … the Cox Plate for instance.

However, the 2018 Magic Millions Kingston Town Classic – the final leg of Perth’s three annual Group Ones – is likely to be remembered as the opening gambit from a soon-to-be-if-not-already powerhouse of Australian racing.

Arcadia Queen was simply sublime in Saturday’s Kingston Town, living right up to her $2.25 favouritism by running away to score with over four lengths to spare. It looked further.

It’s also worth noting that we aren’t just comparing Perth apples with Perth apples: Darren Weir and Chris Waller had both brought across runners, while Jarrod McLean was campaigning Trap For Fools, last seen demolishing his weight for age rivals in the time honoured, Group One Mackinnon Stakes at Flemington in November.

Yet all eyes were on Perth’s pride in the 1800m Kingston Town after she had become the first horse to win both the Champion Fillies Stakes and WA Guineas and now, by obvious extension, the first to win all three.

For West Australia’s leviathan breeder/owner, Bob Peters, it was his fifth win in the Kingston Town: first run in 1976 and won by Family of Man.

With 24 Group One trophies taking prominence in the Peters’ vast trophy cabinet, the first Kingston Town winner to race in the famous cerise and white crosses was Old Nick, who, coincidentally, came into the 1998 race via a win in the WA Guineas.

Old Comrade won as a 3YO in 2001 and backed it up a year later, while Perfect Reflection captured the Kingston Town in 2015, the first and only other filly to do so.

Peters has often indicated Old Comrade – who would win four Group Ones including the 2002 Australian Cup – is his all-time favourite, but was clearly awestruck following Arcadia Queen’s latest and greatest, declaring the filly’s demolition job at Ascot as his best win in the race.

“This is Arcadia Queen’s first preparation (five wins and a third from six starts) and it is a bit unusual as we would normally not race a 3YO this much off her maiden prep,” Peters explains. “I would have preferred her not to race in the Champion Fillies and back up a week later in the WA Guineas, but she did it all so easily. We thought she was our best 3YO filly at the start of the season and she has just kept coming through and doing the job so well.

“I always thought Old Comrade was our best winner of this race as he won it as a 3YO and came back the next year and won it again. Maybe she can do the same. She has certainly done more than he (Old Comrade) had done by this stage.”

Certainly the Pierro filly captured the imagination of visiting media pundits who could talk of nothing else but a likely east coast campaign for Arcadia Queen.

Karl Patterson is a long-time commentator, cutting his journalistic teeth on WA racing back in the 1980s, and firmly believes Arcadia Queen could match strides with Perth’s best and brightest from the last four decades.

“Based on Trap For Fools’ Mackinnon win I thought he would go very close on Saturday and was travelling really well into the straight, but she (Arcadia Queen) just went whoosh,” Patterson enthused. “I’ve seen a lot of very good horses head across from the west over the years: Placid Ark won all the major sprints, Northerly took out successive Cox Plates, and there’s Old Comrade of course, while over the past 10 years or so, you had Miss Andretti and Scenic Blast capture major sprints on the east coast before heading on to success at Royal Ascot … and let’s not forget 5-time Group One winner, Black Heart Bart, or Hay List, who would have won a lot more than three Group Ones if he hadn’t run into another tidy filly by the name of Black Caviar.

“However, Arcadia Queen really does appear to be something special and I believe she’ll give Sydney racing a shake. Bob Peters has put a massive amount into the industry over the years – from coast to coast – and his filly genuinely represents the best of both worlds. Her half sister Arcadia Dream won the WA Derby, another half sister in Arcadia Rose won a stakes race in Perth too, while her sire, Pierro, is a genuine rising star of Australian stallion ranks. He’s not far off getting a genuine superstar and Arcadia Queen might just be it!”

Meanwhile, neither the time (Arcadia’s Queen 1:48.55 was the fastest Kingston Town since Sniper’s Bullet’s 1:46.96 in 2009), nor the timing was lost on Racing NSW Chief Executive, Peter V’landys, who announced just last week the introduction of the $7.5 million Golden Eagle in 2019.

The Golden Eagle – to be run over 1500m at Rosehill Gardens on 2 November – is exclusive to 4YOs and appears tailor made for the, by then, 4YO Arcadia Queen.

Although the race is still 11 months away, Arcadia Queen has been installed as equal second favourite – with Graff and Zousain – for the Golden Eagle behind The Autumn Sun. A lot to look forward to!