Aussie Clock Is The Face Of Hong Kong Sprinting 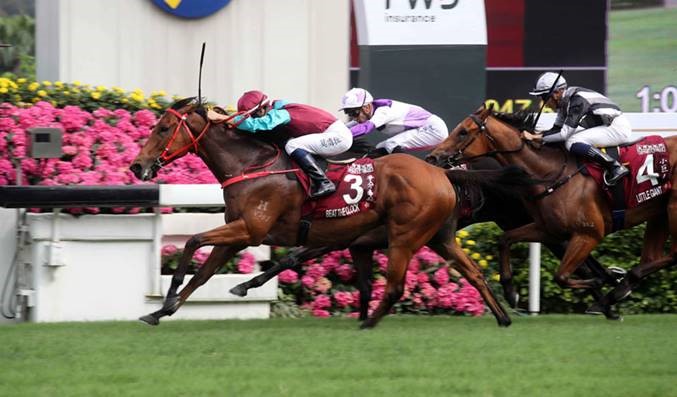 The Group One Chairman’s Sprint Prize over 1200m is one of the jewels in Hong Kong racing’s crown … and, at $HK16 million (approx. $A2.9 million), one of its most lucrative.

Since being opened to international competition in 2016, Australian-breds have made a clean sweep of the race with Ivictory (2018), Lucky Bubbles (2017) and, most memorably, by Chautauqua (2016).

The John Size trained, Beat The Clock, might not have won Sunday’s chapter in the same spectacular fashion as Chautauqua, but the brilliant 5YO left an indelible mark on the race with his commanding performance in a slick time of 1:08.26.

It appeared that front-runner, Rattan, might have pinched a winning lead but Beat The Clock wasn’t to be denied and kept whittling away, eventually scoring with half a length to spare.

“I was extremely happy and would say the race went perfectly for him,” Beat The Clock’s jockey, Joao Moreira enthused. “Rattan wasn’t giving up but fortunately we have a very brave horse who always tries his best.”

Indeed, from 21 starts, Beat The Clock has never finished further adrift than third with eight wins and 13 placings. From seven Group One outings, this was his second victory at the elite level, having captured the Centenary Sprint Cup in January.

Australian visitors, Santa Ana Lane and Viddora would finish fourth and eighth respectively, with Hugh Bowman – piloting the 5-time Group One winner Santa Ana Lane – suggesting his mount wasn’t at his peak, but “take nothing away from the winner, he was too good this time”.

One of 18 stakes winners for the sadly departed Hinchinbrook, Beat The Clock is out of the Group placed 2YO Flion Fenena and hails from a genuine speed family.

Bred in NSW by Jilly Henderson, Beat The Clock was sold by Yarraman Park Stud for $70,000 at the 2015 Inglis Melbourne Premier Yearling Sale before being knocked down for $NZ200,000 at a Ready To Run.

According to his trainer, Beat The Clock will now be tipped out for a spell before resuming late in the year for a tilt at a third Group One.