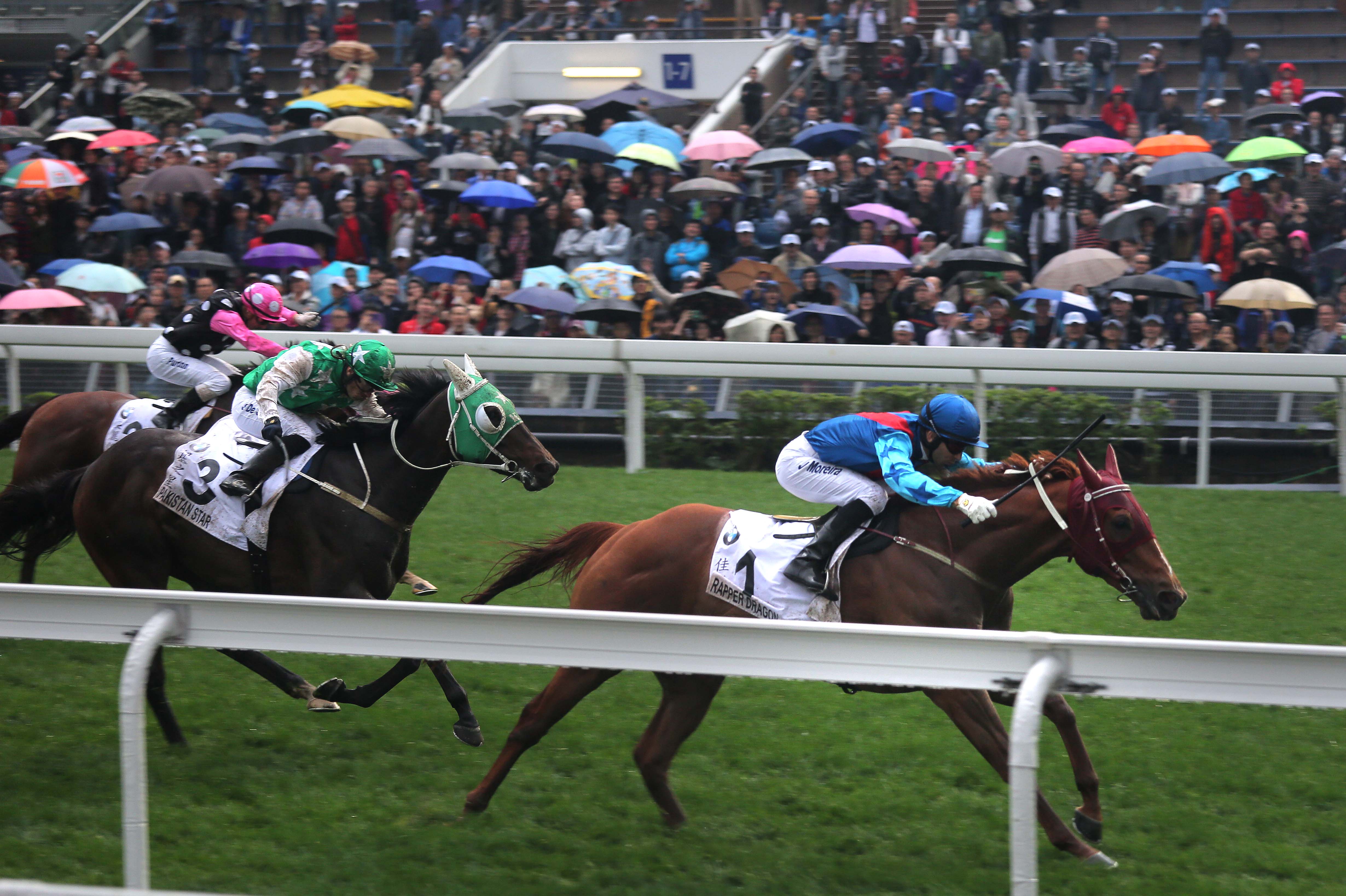 Australia has produced a number of genuine stars in the highly competitive arena that is Hong Kong racing.

The Henry Cojuangco bred, Rapper Dragon, added his name to the honour roll on Sunday when he became the first horse in history to capture all three legs of Hong Kong’s 4YO Classic Series, culminating in the $HK18 million ($A3 million) BMW Hong Kong Derby (2000m) at Sha Tin.

Rapper Dragon had, of course, been expected to win the Derby after scintillating performances in the Hong Kong Classic Mile and Hong Kong Classic Cup, but there’s often many a slip betwixt the barriers and the finish line.

Not on Sunday though with Joao Moreira settling Rapper Dragon just off the pace before steering the flashy chestnut to a convincing victory: a first Derby for the jockey known as the Magic Man and a sixth for Champion trainer and Australian expat, John Moore.

An emotional Moreira said it was the race he wanted to win and thanked God (and John Moore) for the opportunity, while Moore said: “this is a really classy animal, he’s done everything right and this was the grand final and we won it”.

Where to next? “He’s still improving … this is a really serious horse,” Moore adds. “We’re going to toss up between the Champions Mile and the QEII … he’s got versatility so I’m sure I can freshen him up and bring him back to the mile.”

Rapper Dragon originally raced in Australia where he was trained by Gai Waterhouse and produced a win at Wyong before grabbing a Group Three second behind Takedown at Rosehill and, in his final run ‘down under’, finished second to Pasadena Girl in the Group One Champagne Stakes.

Since shifting to Hong Kong, this rising star has peeled off seven wins from 11 outings and has become a Dragon you can believe in.

A son of the Darley Australia-based, Street Boss (also sire of 2016 Newmarket Handicap winner, The Quarterback), Rapper Dragon is out of the Danehill Dancer mare, Swing Dance.

Sadly his breeder, Henry Cojuangco, passed away before the horse really hit his straps in Hong Kong, but according to Gooree Park’s Monica Cummings “Henry would have been very excited at the horse’s continued success”.

“Rapper Dragon had to be gelded early on and, as such, didn’t fit into Henry’s breeding plans, but he very much enjoyed racing the horse. Hong Kong made a significant offer for the horse … too good an offer to refuse for a gelding,” Cummings reveals.

Now based at Newgate Farm, which sold her Congrats yearling for $110,000 at the Gold Coast Magic Millions in January, Swing Dance produced a colt by Deep Field last spring and is now back in foal to Street Boss at Darley.

CUDDLING UP TO FURTHER KIWI SUCCESS

It was the first stakes victory for the Stratum mare, who campaigned in Australia between October 2015 and April 2016 where she won a maiden at Ballarat and finished fourth in the Listed Twilight Glow at Caulfield.

Since returning to New Zealand however and resuming in January, the mare has won four straight and appears to have a very promising future with trainer John Bary, who said Miss Wilson is now likely to step up to Group One level.

Miss Wilson is the 34th stakes winner for the deceased stallion, Stratum, whose legacy from his Widden Stud base includes Crystal Lily, Stratum Star and Takedown, while the mare is also a half sister to New Zealand Horse of the Year, Jimmy Choux.