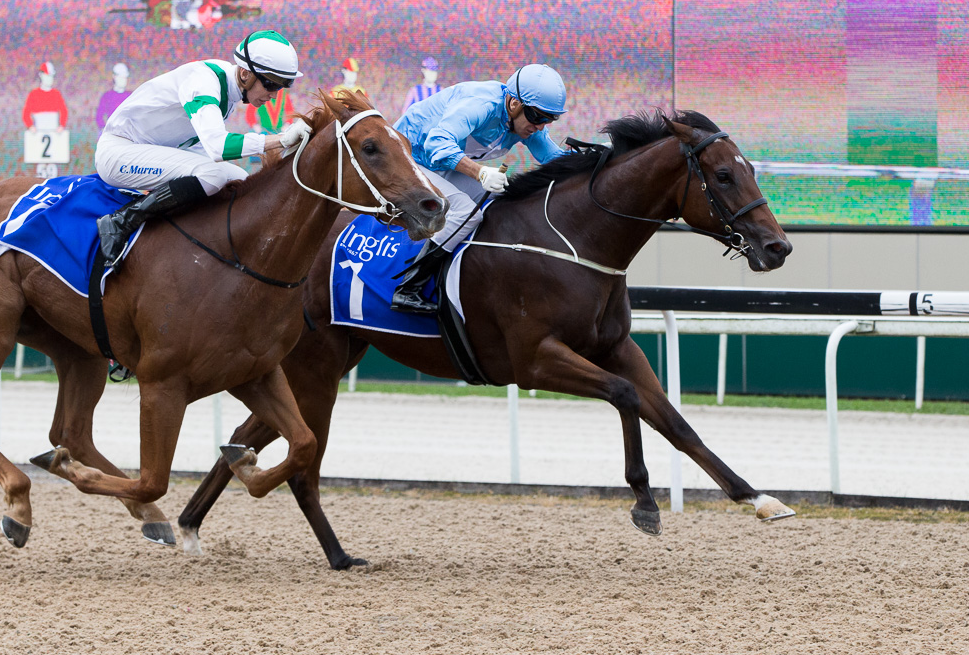 You could not have wished for a better start to the 2019 Aushorse Golden Horseshoe Series in Singapore on Sunday after hot favourite, Big Hearted, held out fellow Australian-bred, Rocket Star, in an absolute nail-biter.

The Michael Clements trained, Big Hearted came into the Inglis Ready2Race Sales Stakes over 1000m at Kranji on the back of a solid debut victory on 26 April and was the only 2YO with racing experience in the opening leg’s 12-strong field.

Still, Big Hearted had a few hearts in mouths as he raced greenly from his wide barrier, eventually holding on by merely a head.

Fittingly, Big Hearted – a first crop son of Darley’s dual Group One winner, Hallowed Crown – was sold for $120,000 at the 2018 Inglis Melbourne Premier Yearling Sale and, according to the Clements stable, is a “really nice horse in the making”.

“He (Big Hearted) raced wide throughout and it’s little wonder he was feeling the pinch by the end of the race,” Clements points out. “He’s got a lot of ability and improved on his first run … hopefully improves on the second run too!

“He made good around horses and he’s even likely to be better in the second leg which is over 1100m.”

The second of the series – the S$75,000 Thoroughbred Breeders Australia Centenary Stakes on 9 June, will be followed by the IRT (21 June) and Magic Millions (7 July) sponsored legs, culminating in the S$250,000 Group Two Aushorse Golden Horseshoe Final over 1200m on 19 July.

However, the Aushorse Golden Horseshoe kick-off was just one of several highlights for Australian-breds on the weekend which included a stakes double in South Africa via Roy’s Riviera and Being Fabulous, while Hinerangi captured the Rangitikei Gold Cup in New Zealand.

South Africa has been a very happy hunting ground for Australian-breds in recent years via such luminaries as Horse of the Year, Oh Susanna, Champion 2YO, Soqrat and Whisky Baron, and the message was reinforced on Saturday at Greyville and Sunday at Turffontein.

Roy’s Riviera became the eighth stakes winner for Vinery Stud’s All Too Hard by producing a gritty performance to win the Listed East Coast Cup over 2000m at Greyville for trainer Frank Robinson, while Being Fabulous flew the flag for High Chaparral (129 stakes winners) in the Listed Syringa Handicap over 1600m at Turffontein.

Not to be outdone, other Australian-bred winners on the Turffontein program were 4YO Foxwedge mare, Infamous Fox, while Shadwell Stud’s 2YO Stratum colt, Ashbaal, was impressive at his third outing after being sold for $460,000 at last year’s Inglis Australian Easter Yearling Sale.