Australian-breds Go For Gold In Singapore 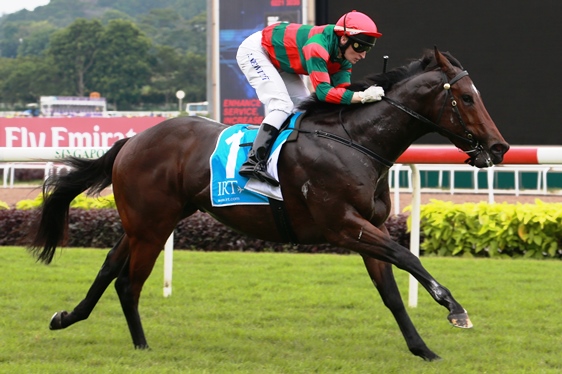 Two year old racing in Singapore continues to grow in popularity and Friday night’s $S325,000 Group Two Aushorse Golden Horseshoe at Kranji is shaping up as a terrific contest to determine ‘king of the kids’.

The five legs of the Golden Horseshoe leading into the final have steadily built the anticipation but it appears to be a fairly even contest with several youngsters capable of putting on a show.

The Hideyuki Takaoka trained, Jupiter Gold, won both the first and third legs and looked like a clear cut favourite for the final, but had his colours lowered by Steve Burridge’s Macarthur in the fourth heat, eventually finishing fourth.

With the barrier draw due to take place on Wednesday morning, other Australian-bred contenders include the Cliff Brown trained Sir Isaac, Tan Hai Wang’s Captain Royal, and fifth leg winner, I’ve Got a Feeling, from the Shane Baertschiger stable.

A former top jockey in Australia and Macau, Burridge has enjoyed a hugely successful career as a trainer in Singapore and considers Macarthur (by Charge Forward) a very good chance to ‘wear’ the Horseshoe on Friday night.

“I  got hold of Macarthur via Steve Levar, who had managed to secure him from Ron Gilbert’s Highgrove Stud,” Burridge explains. “I get the majority of my horses from Australia – a lot of tried horses and I usually get to the Ready To Runs – and Macarthur had spent some time with Gai (Waterhouse).

“He looked a natural and came to hand very early. He’s a tough horse … very fast and I’m confident about his chances on in the Final.”

Baertschiger would also fancy his chances with I’ve Got A Feeling (by Encosta de Lago) who comes into the Final fresh off a win on 26 June at his only his second outing, while Jupiter Gold (by Congrats) can hardly be discounted after winning his first two races in resounding fashion and was only beaten just on a length at his last start on 10 June.

Another interesting runner is Sir Isaac, who is by promising young sire, Dream Ahead, the multiple Group One winning son of Diktat, who had a smart 2YO winner (Happy Event) at the Sunshine Coast on Saturday.

Purchased by Brown for $150,000 at the 2015 Magic Millions Gold Coast Yearling Sale, Sir Isaac has only had the one start, finishing a neck second on 26 June and the leading trainer also believes the youngster is in with a chance on Friday: “He (Sir Isaac) went OK at his first start – they didn’t run much of a time – but he’s come on since the run and fingers crossed he’ll go alright on Friday.”

Singapore Turf Club’s Chief Handicapper, Mike Wanklin, said the Final was “shaping to be an outstanding race” with “some very good entries”.

“I believe it will be a particularly strong edition of the Aushorse Golden Horseshoe Final,” Wanklin enthused. “It should be a very open field with lots of chances as has been the case with a lot of the age-related races in Singapore this year.

“A number of the entries for the Golden Horseshoe have already been impressive winners while others have shown their potential in the heats. One thing is for sure, I think that quite a few of the contenders have big futures.”