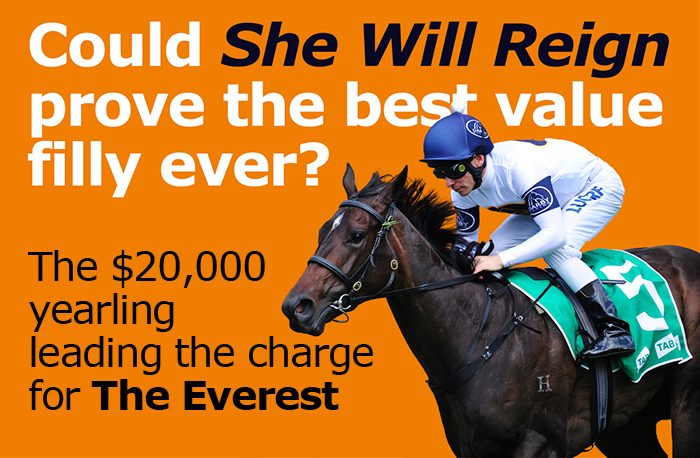 State rivalry grows over a mountain of money

Historically, this coming Saturday has been known as Caulfield Guineas day, featuring two time-honored Group One contests for colts and fillies over 1600 metres.

A day that signaled, emphatically, that all eyes in Australasian racing needed to be firmly focused on Melbourne. But then came something this year that changed the landscape: The Everest.

Similar to America, each state in Australia has its own racing authority, with the two most important being Victoria (Melbourne) and New South Wales (Sydney).

The two don’t always see eye to eye and The Everest, a $10 million dollar challenge race created out of nothing, hasn’t improved relations (advertising for the event has focused on Sydney, rather than Melbourne,  hosting the race with the biggest purse).

The Everest will be the world’s richest thoroughbred race on turf, after 12 ‘slot’ holders paid $600,000 each to have a berth in the 1200 metre sprint at Sydney’s Randwick racecourse (see the Everest graphic in this newsletter for all details). The concept is almost identical to that of The Pegasus World Cup.

So now racing fans will have to split their attention between both Melbourne and Sydney (at least for another week).

She Will Reign favourite to win The Everest

A three-year-old filly sold as a yearling for just $20,000 has emerged as the horse favoured to claim the $5.8 million winner’s purse for The Everest.

She Will Reign has been the favourite to upstage Australia’s established sprint stars since a breathtaking first-up win at weight-for-age over 1000m in the Group One Moir Stakes at Moonee Valley last month.

Her Moir victory came at only her sixth start and her first since winning the Group One Golden Slipper, the richest and most important two-year-old event on the Australian racing calendar.

As a syndication horse from the 2016 Inglis Classic Sale for Darby Racing, She Will Reign (Manhattan Rain) is Australia’s latest rags-to-riches turf story and her 20 owners include an assortment of everyday workers including coal miners, nurses and teachers, as well as a retiree.

Those owners have already collected nearly $3 million in prizemoney, so a win in The Everest would make her one of the best value yearling buys in racing history.

But She Will Reign is the least-experienced runner in a 12-horse field that has amassed $25.25 million in career earnings.

Her fans would have been encouraged when she drew close to the rails in stall two for her trainer Gary Portelli and new jockey Corey Brown.

Sprinting legend Chautauqua (Encosta De Lago) – rated the world’s best sprinter and a six time Group One winner – also drew in the first half of the field with barrier five and Houtzen (I Am Invincible), winner of the sales-restricted Magic Millions Classic this year, has the rails.

English (Encosta de Lago), for training partnership Gai Waterhouse and Adrian Bott, drew the widest of the 12 runners while Redkirk Warrior (Notnowcato) has drawn the best of the David Hayes trio with barrier three.

The Caulfield Guineas favourite Royal Symphony will carry headgear for the first time in the $2 million race that has been his spring target since emerging during the winter with two wins from as many starts.

Trainer Tony McEvoy has put winkers on Royal Symphony (Domesday) after the colt had his colours lowered for the first time in four starts in the Guineas Prelude on October 1.

After that result there was obvious disappointment in the Royal Symphony camp that counts jockey Dwayne Dunn’s wife, Amanda, as a part-owner.

The only filly in a capacity field of 16 acceptors is Catchy (Fastnet Rock) from the Lindsay Park yard.

Catchy won Victoria’s premier two-year-old race, the Group One Blue Diamond Stakes, last season and she will take on the colts and geldings after a win and a minor placing in her two spring outings.

Godolphin filly Alizee is a clear-cut pick to win the $500,000 Thousand Guineas for which she brings Group One-winning Sydney form to the contest.

Alizee (Sepoy) backed up a dashing win in the Group Two Tea Rose Stakes over 1400m with an even more emphatic victory over 1600m in the Group One Flight Stakes at Randwick on Epsom Handicap day.

Trainer James Cummings gave her a familiarisation gallop at Caulfield on Tuesday ahead of the filly coming up with gate two in a field of eight.

Shoals (Fastnet Rock) for trainer Anthony Freedman is rated the biggest threat after a last-start win over 1400m in the Group Two Tranquil Star Stakes at Caulfield.

Hartnell is expected to have international competition when his spring campaign continues in the $1 million Caulfield Stakes, a weight-for-age race over 2000m.

Beaten at his past two starts, Hartnell (Authorized) will have a jockey switch when Glyn Schofield rides the multiple weight-for-age winner for the first time in the Group One race.

Tipped to take their place in the race in which Winx beat two rivals last year are the Aidan O’Brien-trained duo Johannes Vermeer (Galileo) and Taj Mahal (Galileo).

Kaspersky steps out in Toorak Handicap

The Jane Chapple-Hyam-trained Kaspersky is set to open his Australian campaign in the $500,000 Toorak Handicap at Caulfield.

Kaspersky (Footstepsinthesand) has 56kg (the minimum carries 52kg) limit in the Group One mile handicap for which Melbourne Cup-winning jockey Michelle Payne had an early booking.

Payne rode Kaspersky into fifth place in the Group One Queen Anne Stakes during Royal Ascot this year and as a holder of a dual licence in Victoria will take over the mare’s training at the end of the spring carnival.

Payne, however, has had to relinquish the mount due to illness and Luke Nolan will take the mount.

Saturday’s Toorak run will decide whether Kaspersky will head to the Cox Plate or the 1600m Group One Cantala Stakes later in the spring.

An ex-pat Australian, Newmarket-based Chapple-Hyam brought Mull Of Killough to Australia for the 2013 for the Cox Plate.