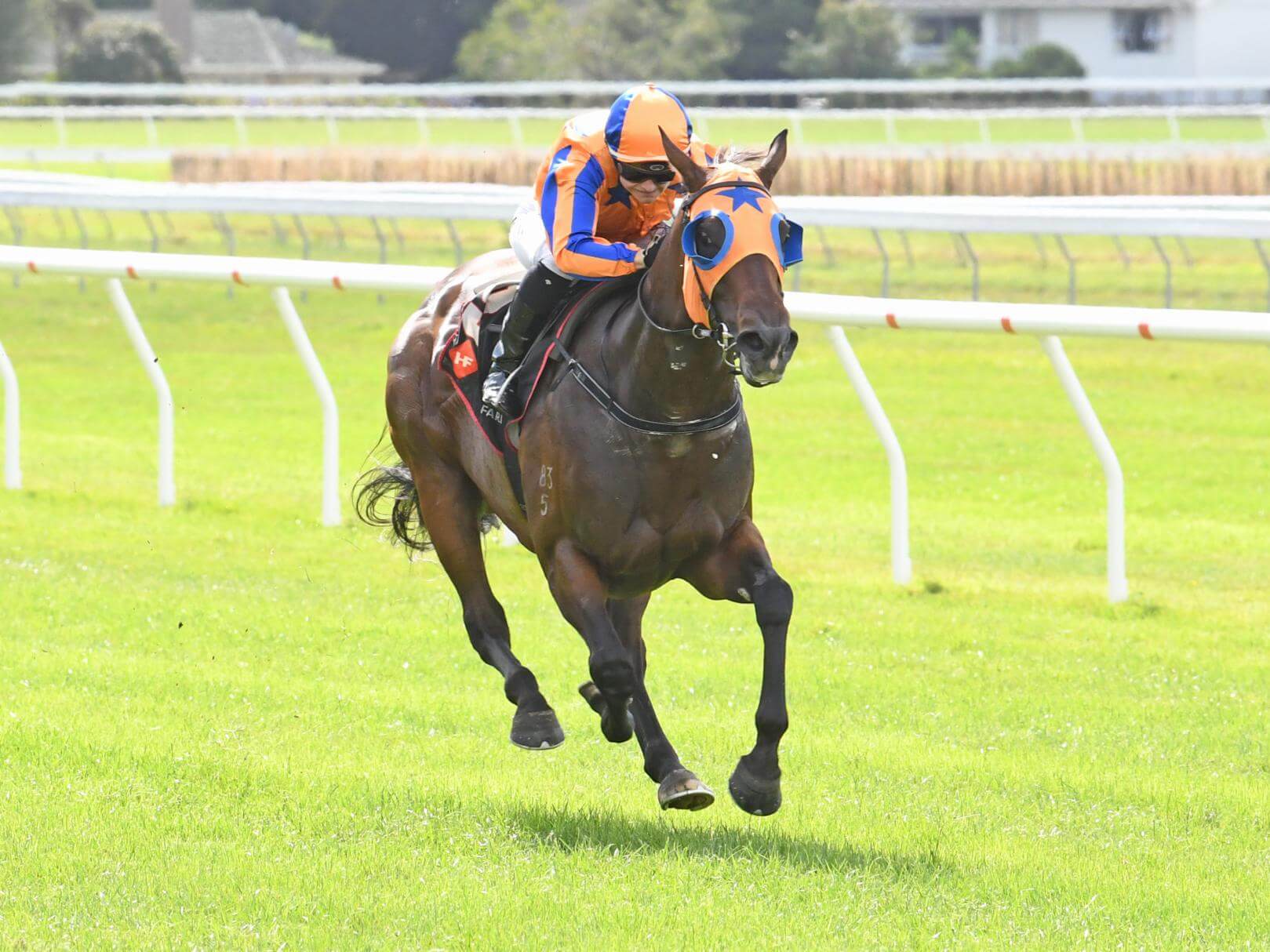 There is little question that Te Akau Racing’s David Ellis is one of the most astute yearling buyers: on either side of the pond.

While Ellis’s star mare, Melody Belle – by Godolphin’s late Champion Sire, Commands – had to be content with third in the Group One Futurity Stakes at Caulfield on Saturday, the Te Akau silks flew high and proud across the Tasman in Group races at Otaki and Matamata.

The brilliant Australian-bred, Avantage – a Champion NZ 2YO Filly and Leading NZ 3YO Filly – won her third Group One in the Haunui Farm Classic over 1600m at Otaki, proving that her brilliance extends to a mile, while exciting 2YO, Need I Say More, remains unbeaten after his dominant victory in the Group Three Waikato Stud Slipper at Matamata.

Te Akau Racing has enjoyed tremendous success in recent years with Australian-bred Group One winners such as Age of Fire (Levin Classic) and Heroic Valour (Diamond Stakes who now stands at Raheen Stud in Queensland), but really is firing on all cylinders of late.

Te Akau’s, Jamie Richards, is the leading trainer in New Zealand with Avantage his 86th winner for the season (72 at the same stage last year) and his 14th winner at black type level.

The 4YO Fastnet Rock mare is something of a stable favourite as racing manager, Libby Richards points out: “It was a really, really good win and, gee, she deserved it.

“She hasn’t missed a beat this time in. Great in the Hallmark, great in the Telegraph, again at Te Rapa, when beaten by a superstar in Te Akau Shark in the BCD Sprint after getting back and finding the line. She’s been good enough to win in Sydney last autumn (Group Three Birthday Card Stakes) and she’s top class.

“Avantage was dominant over a mile and it certainly gives us options.”

Plenty of options too it seems for Need I Say More, the first stakes winner in Australasia for Fastnet Rock’s barnmate at Coolmore Australia: No Nay Never.

After winning comfortably on debut three weeks earlier, Need I Say More produced a blinder in the Waikato Stud Slipper – racing away from hot favourite Cool Aza Beel to score by three lengths.

Need I Say More was originally sold as a weanling, by breeder Burnewang North Pastoral, for $65,000 at the 2018 Magic Millions National before being offered in New Zealand the following year.

“He was passed in at the sales, but I really loved the horse and came home and couldn’t sleep knowing I didn’t have him,” David Ellis explains. “I rang the vendor, Eion Kemp, who stayed in for a share because he loved him too.

“We have some new owners in the horse, which we’re thrilled about and it’s a great way for them to start. I was very impressed with his debut win, when he looked like he wanted to just keep running, and even more impressed with his effort on Saturday.

“He’s now had two from two and not many horses win a Group Three at just their second start.”
While Coolmore would celebrate a memorable day on each side of the Tasman with Avantage (Fastnet Rock), So You Think’s Miss Siska in the Group Two Peter Young at Caulfield and Arctic Stream in Perth’s Detonator Stakes – who is by the late and very great High Chaparral – the victory of Need I Say More was of particular significance.

No Nay Never is a Group One winning son of Scat Daddy and has produced 20 stakes winners in the northern hemisphere, but 2YO Need I Say More hails from his first Hunter Valley crop. Standing at a fee of $44,000 in 2019 (after originally standing at $11,000 in 2016), No Nay Never has covered 391 mares in the last four seasons and is one of only two first season sires to produce a stakes winner in New Zealand in 2019/20.

Coolmore celebrations aside though, Need I Say More’s victory could hardly be more timely for Victoria’s Stockwell Thoroughbreds which will offer a Dissident half sister at next week’s 2020 Inglis Melbourne Premier Yearling Sale (1-3 March at Oaklands Junction).

Need I Say More is the first foal from the winning Fastnet Rock mare, Bo Bardi, a daughter of North American stakes winner, Our Golden Dream.

With Stockwell preparing to sell six yearlings at the Premier, Brodie Becker reckons the timing couldn’t be better.

“The Dissident filly is a big girl alright, but coming together nicely,” Becker enthused. “A client purchased her from Burnewang North for $30,000 at the Great Southern last year and it’s a terrific stakes winning family.

“That Need I Say More looks like she might be something special and I understand she’s going to tackle the Group One Sistema Stakes (7 March) over there.”

Burnewang North purchased Bo Bardi from Coolmore Australia for $75,000 at the 2017 Inglis Broodmare Sale, in foal to No Nay Never, and while the mare missed in 2018, she is in foal to Godolphin’s multiple Group One winning sprinter, Impending.

Despite missing some vital work due to a spike in temperature, Golden Sixty showed why he is the shooting star of Hong Kong racing by capturing the HK$10 million (approx. A$2 million) Hong Kong Classic Cup over 1800m at Sha Tin on Sunday.

Even though “he’s only 75 to 80 percent”, Golden Sixty unleashed a withering burst over the final stages to defeat fellow Australian-bred, Champion’s Way (by Hinchinbrook).

Golden Sixty – with nine wins from 10 starts! – won the Hong Kong Classic Mile in January and will now seek to capture the third leg of the 4YO Classic Series, the Hong Kong Derby on 22 March, and emulate Aussie superstar, Rapper Dragon: the only other horse to sweep the series.

“Everybody knew he had a temperature two weeks ago,” a relieved trainer Francis Lui points out. “I was very worried he would miss this race, I tried everything to work it out and finally we got it and he still performed … he was a bit keen before the race so I was worried, but he relaxed and is very tough.”

Golden Sixty is by Godolphin’s Medaglia d’Oro (138 stakes winners) from the Irish Group Two winner, Gaudeamus and was sold by Element Hill to Riversley Park and Enigma Farm for $120,000 at the 2017 Gold Coast Magic Millions Yearling Sale. A pretty good result for a horse that has now won over A$4 million!

With the 38th Asian Racing Conference having just wrapped up in South Africa, attendees would have had the opportunity to watch Australian-bred Crown Towers unleash a power packed display to capture his initial stakes victory in the Listed Jet Master Stakes over 1600m at Kenilworth on Saturday.

With three wins and four placings from 11 outings, Crown Towers was sold by Mill Park Stud to Mayfair Speculators for $280,000 at the 2017 Inglis Melbourne Premier Yearling Sale.

Mill Park will offer an American Pharoah half brother to Crown Towers at the 2020 Inglis Australian Easter Yearling Sale (7-8 April).