Back To Back Oaks Wins For Ciaron Maher 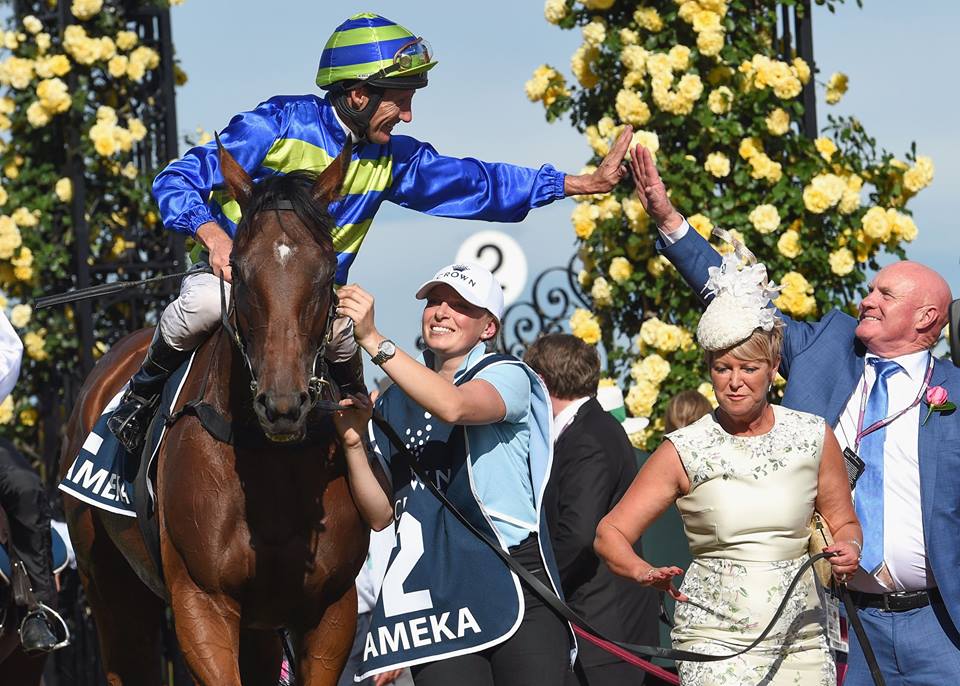 Bred to be a sprinter, the Ciaron Maher-trained Jameka showed she was the superior stayer when hitting the front on the home turn then coming away for a bloodless win in Thursday’s $1 million Group I Crown Oaks (2500m) at Flemington.

It was back to back Crown Oaks wins for Ciaron Maher who captured the classic 12 months ago with Set Square.

Damien Oliver celebrated his 107th Group 1 victory on the daughter of Myboycharlie (IRE).

Set to an all-out drive 400 metres from home Jameka did not wilt in a two and a quarter length win over the luckless Honesta (Monaco Consul) with favourite Ambience (Street Cry) a length and a quarter back in third.

“I thought no one would want to take it up and I wasn’t going to hesitate to be the one because I have a lot of faith in this filly’s staying ability,” Oliver said.

“She’s had a faultless preparation and she actually dropped the bit in front and I just stayed off the rail a bit and one came on inside her and it ended up taking it up.

“She was just going too easy a long way from home and I had to let her go.

“A lot of credit to Ciaron and all his staff.

“He’s mapped it out beautifully, nothings gone wrong for her and we thought early she had Oaks written all over her and it’s great when a plan comes together.”

Maher had the Oaks in mind following Jameka’s win in the VRC Sires Produce Stakes at two.

“Set Square was a late developer and more of a stayer whereas this filly (Jameka) was a good two-year-old and has more of a turn of foot,” Maher said.

“Ollie backed her in there and rode her like she was the best horse in the race.

“She’s got a beautiful stride on her and is a very clean winded filly.

“There’s nothing better than winning a big race like this during the carnival, it’s what it’s all about.

“I’m thrilled to be able to do it for a second year and for a great bunch of owners.”

Bred by Gilgai Rick Jamieson, Jameka was a $130,000 Inglis Premier purchase by her trainer from the draft of Gilgai Farm.

She was the second most expensive yearling for Myboycharlie sold in 2014 and is the first winner for General Nediym mare Mine Game, a winning half-sister to Group I STC Canterbury Guineas winner Jymcarew.

Mine Game’s colt by Snitzel, named Nikitas, sold for $280,000 at Magic Millions Gold Coast Yearling sale earlier this year when offered by Segenhoe Thoroughbreds and purchased by the successful bloodstock agent John Foote.

Not covered in 3013, Mine Game was served last spring by Cox Plate winner Shamus Award and has produced a filly by him this spring.

Jameka becomes the third Group 1 winner for Prix Morny winner Myboycharlie (IRE) who shuttles to Vinery Stud where his stud fee this spring has been set at $11,000.