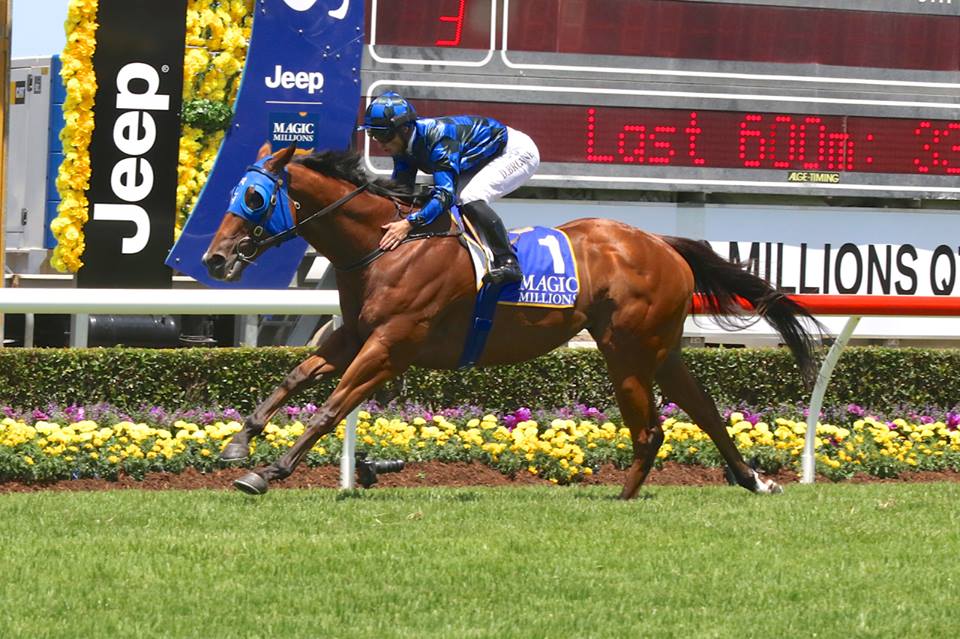 For tradition and legend in Australian racing, there is the Melbourne Cup.

For dusty, desert basics, there is Birdsville.

In between there are a couple of thousand race meetings a year to suit pretty much every taste.

But rarely has any of them said as much about buying and racing horses in Australia than last weekend’s $10 million Magic Millions Gold Coast raceday.

Partly because it offered more money than has ever been given away on an Australian racecourse, partly because of what was going on in the sale ring across the road, and mostly because of the horses who won the nine races, this was a day that showed the racing world what it’s all about.

In the middle of a record-breaking week in which buyers from a dozen countries spent almost $130 million on 800 yearlings, the horses went at it on the track in races exclusively for Magic Millions graduates.

And if they proved anything, it was that in Australia you can buy on a budget and win like a billionaire.

Of the nine winners on Australia’s richest ever raceday, only two cost more than $100,000, the most expensive cost $320,000, and the best of them, Buffering, was the cheapest.

The six-time Group 1 winner who cost $22,000 as a yearling won the Magic Millions Plate, taking his racetrack earnings beyond $6 million.

As much as Buffering was the hero of the day, Capitalist was the star – and a modestly-priced one at that.

The son of Written Tycoon won the $2 million Magic Millions 2YO Classic and is now favourite to win the world’s richest juvenile race, the $3.5 million Golden Slipper Stakes.

Capitalist sold at the Magic Millions Gold Coast sale a year ago for $168,000 and could now be valued at around $5 million.

But to his owners, who include Newgate Farm’s Henry Field and bloodstock agent James Harron, he could soon be worth a lot more.

Field and Harron formed a syndicate that bought Capitalist a year ago, taking the odds that he could run and that his sire Written Tycoon would realise the potential they believed he possessed.

“While Written Tycoon isn’t a top five sire, he is a stallion we admired, and Capitalist fitted our ideas of a quality colt.

“He was a mature, gorgeous horse. He cost more than we hoped to pay for him, but you have to take a calculated risk at certain times.

”We walked away from that sale with a horse we loved and now we are hoping that luck stays with us.”

From other Magic Millions sales came 3YO Guineas winner Mahuta who sold for $35,000 in Adelaide and Husson Eagle, a $42,500 buy from the Patinack Farm Dispersal in 2013.

The honour of being the most moderately-regarded yearling to win on Australia’s richest raceday went to Tinto, who is also part of one of the stories of Magic Millions week.

Bred by the McAlpine family at their Eureka Stud, Tinto was passed in twice as a yearling, most recently when the bidding stopped at $6,500 at the MM National Yearling Sale in 2012.

The McAlpine’s kept her and have been rewarded with two Magic Millions wins and a Group 1 Queensland Oaks.

As rewards go, they had another on day one of the sale thanks to a colt by Snitzel from Air’s Precious who sold for $500,000, a figure Eureka’s Scott McAlpine said he hadn’t dreamed of.

The big week for Eureka continued when a half-sister by Siderius to the once-unwanted Tinto sold for $250,000 only a few hours after the mare’s second win in the Magic Millions Trophy.

For Magic Millions, the success of the landmark race meeting was accompanied by the success of a yearling sale that has found it’s place among the world’s major bloodstock auctions.

In the past season alone its graduates won Australia’s best WFA race, the Cox Plate (Winx) and the world’s richest juvenile event, the Golden Slipper (Vancouver).

As Segenhoe Stud’s Peter O’Brien said after selling the half-brother to Vancouver for $1.5 million: “Two or three years ago we wouldn’t have sent a horse like this up here.

“It’s a testament to Magic Millions that they can attract an international buying bench like they have that is willing to pay good money for good horses.”

Buyers from 13 countries at this year’s sale pushed the Book 1 turnover beyond $100 million for the first time, spending more than $116 million at an average of $194,976 for the 595 yearlings sold.

Continuing the trend that has built up over recent years, the China Horse Club emerged as the leading buyer with 21 yearlings purchased outright and four more in partnership, three of them with the US-based Winstar Farms.

The most prolific international buyers were from Hong Kong. Led by the Hong Kong Jockey Club and George Moore Bloodstock they signed for 43 yearlings at an overallcost of $11.17 million.

Mainland Chinese buyers, including Yu Long Investments and RIFA Mustang, along with the CHC, spent $9.065 million on 26 yearlings.

Big-name American breeders Spendthrift Farm added four more locally-bred horses to their new Australian operation and Barbara Banke’s Stonestreet Stables increased her local stocks, as did another US breeder Hill ‘N Dale Farms who, with Coolmore, were part of the group that bought Vancouver’s half-brother.

Spendthrift struck early on day one of the sale claiming a colt by Street Cry from the Group 1-winning mare Aloha for $625,000.

Like many international buyers, Spendthrift regards Australia as a quality source of future stallions.

The farm’s Australian manager Garry Cuddy agreed: “There is probably no better pedigree in the book.

“Everyone knows what an international success Street Cry has been. If this one can run he’ll be a valuable stallion.”

Spendthrift raised the stakes on day two, going to $800,000 for a half-brother to Group 1 winning racehorse and successful stallion Starspangled Banner by Fastnet Rock out of Gold Anthem.

As breeders hailed the sale as an unqualified success, it’s results were greeted as a “coming of age” by Magic Millions.

“The fact that we can sell horses well into seven figures and have multiple seven-figure horses tells us that the sale has gone to another level.

“Breeders should be congratulated for having the faith in us to selltheir horses.”