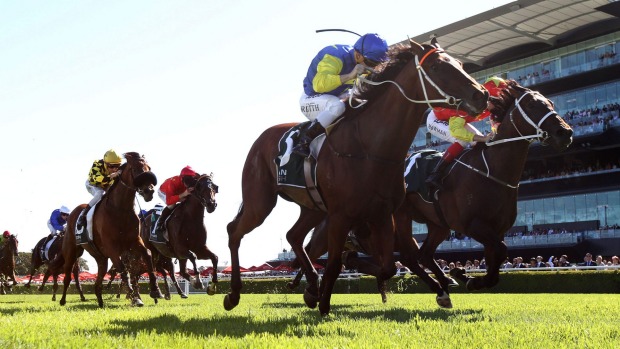 They borrowed money from their mortgage to buy the mare.

They were told he wasn’t a good enough type to be sold as a yearling.

And everyone thought Press Statement would just win the Randwick Guineas.

But for brothers Mark and Tony Carusi, they always believed.

They believed $20,000 was a good buy for Mignard from Darley.

Her third foal was Le Romain, the horse that got knocked back by yearling selectors.

The Carusi boys part-own Le Romain with good friends but it is the story of how he came about that is quite amazing.

They owned two mares and were looking to have them served by Darley stallions.

The breeding house were offering a deal to breeders if they sent three mares in a package, so the boys decided to buy another mare and get the savings.

That mare was Mignard, the mother of Le Romain.

She was first sent to Street Boss but unfortunately Manhattan Beach never made it to the track after fracturing a pelvis in work.

The second foal, a full sister to Le Romain named Strike Hard, also never made it to the track.

Le Romain, by Hard Spun, was the third foal and the Carusi boys always had belief.

“We couldn’t believe it when he was knocked back, they said he wasn’t good enough but we loved him as a type,” said Mark.

“It is a real rags to riches story, quite amazing really.”

The Carusi brothers have a yearling Domesday filly out of Mignard that they are keeping to race and she too will be trained by Kris Lees.

Mignard is in foal to Kuroshio and has a foal by the speedy son of Exceed And Excel on the ground.

They’ve been around racing for many years and enjoyed breeding their own but have experienced nothing quite like the ride provided by Le Romain.

Next stop is the Rosehill Guineas, where they will look to stretch him to 2000m.

The Randwick Guineas victory was the first Group 1 win for Hard Spun in Australia and his ninth worldwide.

The Kentucky Derby winner shuttled to Australia for several seasons but is now serving in America.