Beautiful Filly Too Nippy In Quezette 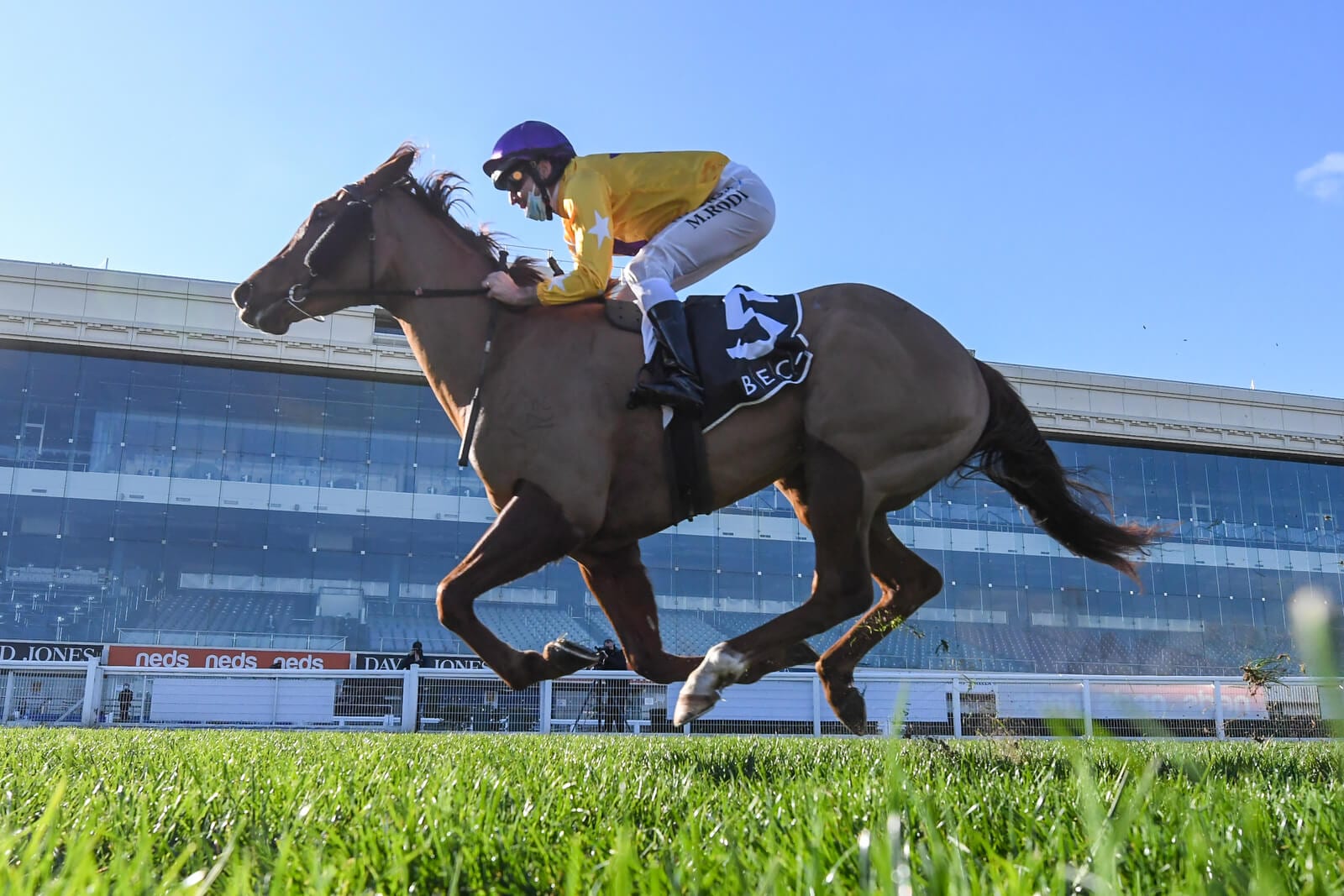 You would be hard pressed to find any owner who would be happy to have their horse known as “Australia’s best maiden”.

Not really something you want to be the best at. Yet, up until Saturday’s Group Three Beck Probuild Quezette Stakes over 1100m at Caulfield, that maiden tag best fit the 3YO filly, Bella Nipotina, and, while there could be some debate over ‘best’, you certainly couldn’t argue with the title of the ‘richest’.

First sighted last October when fourth in the Listed Debutant Stakes at Caulfield, Bella Nipotina had landed two large paydays when second in the Inglis 2YO at Moonee Valley on Cox Plate day ($92,000) and then second in February’s Inglis Millennium ($380,000) at Warwick Farm.

By the time the Lindsay Park trained, Bella Nipotina lined up for the Quezette, the Pride of Dubai filly had banked a massive $550,975 in stakes … not bad for a ‘non-winner’ who cost just $80,000 at the 2019 Inglis Melbourne Premier Yearling Sale.

And now, courtesy of her go to whoa performance in the Quezette, Bella Nipotina has raced on eight occasions for the solitary win, three seconds and $654,725 prizemoney – never finishing further astern than fourth.

The spring appears equally promising too with Lindsay Park’s Ben Hayes suggesting that the Listed Atlantic Jewel Stakes and Listed Cap D’Antibes Stakes in September could be next on the agenda for Bella Nipotina.

All music to the ears of breeder and part-owner, Michael Christian, who has had quite the ‘journey’ with his latest stakes winner.

“It started when we loaded her onto the truck to go to commence her yearling preparation,” Christian explains. “She loaded well, but then thrashed around in the truck and, in doing so, suffered some significant lacerations.

“Thankfully, she didn’t suffer any structural injuries, but it certainly compromised her yearling preparation. The team at Rosemont did a fantastic job to present her as well as they did but there is only so much you can do in 10 weeks.

“Maybe her injuries had something to do with the fact she only made $80,000 despite being from a well related family and by the first crop of Street Cry’s (Group One) Blue Diamond winner, Pride of Dubai.

“Lindsay Park and Andy Williams bought her and I approached David Hayes after the sale and asked if my brother, Brad, and I could be involved in the ownership. Certainly glad we did!”

A premiership player with Collingwood in 1990 and now the Match Review Officer (MRO) for the AFL, Christian fits just about every criteria for a racing tragic.

“I was a stockbroker in the mid 90s and a colleague introduced me to horse ownership. It started with taking 2.5% shares of horses trained by Lee Freedman,” Christian recalls. “In 1997 I hosted a corporate stockbroking lunch with Gai Waterhouse which was the start of a wonderful relationship racing horses such as Phoenix Park, who started favourite in the Magic Millions 2YO Classic (finishing sixth), ran fourth in the (Group One) Golden Slipper and then went on to win the (2002 Group Two – now Group One) TJ Smith Stakes.”

Having developed a passion for racing and moreover the horse, Christian enrolled as a mature age student in a Diploma of Horse Breeding at the NMIT in 2003. From there it was onwards and upwards with Christian purchasing a 36 acre horse property in Whittlesea in 2007 on the recommendation of good friend, Peter Morgan.

“We have some wonderful facilities including a 32 box stable complex called the Eloping Barn and 14 box stable named after Fuhryk, and our team is headed up by manager, Lelaina Vennemeyer.”

Despite the wide-ranging success from the breeding shed and on the track, Christian clearly has a soft spot for Bella Nipotina.

“Bella Nipotina’s granddam, Bella Inez, was the first mare at our original property, so anything from that family will always be very special to us. She (Bella Inez) did a lot to put us on the map … we bought her as a yearling with Peter Morgan and although she only raced once, her first foal – by Starcraft – was called Hallowell Belle who won a (Group Two) Gilgai and (Listed) Darby Munro, but was also 4-times Group One placed, including a second to Sepoy in the Blue Diamond.”

“I had no intention of selling Bella Orfana as she was the last filly out of the mare, but (2019 Melbourne Cup winning trainer) Danny O’Brien came to the farm and was keen to train her and took a 25% share.

“Bella Orfana showed enormous promise, but just couldn’t finish off her races because of some heart problems and was retired. Her first foal is Bella Nipotina, the second is a filly by Capitalist, she’s in foal to Trapeze Artist and will head back to Pride of Dubai this spring.”

Christian will often retain shares in yearlings he sells if asked by trainers – “I believe in what we produce and I’m very happy to stay involved” – but did wonder for a while if Bella Nipotina would get the ‘monkey’ off her back.

“I was beginning to worry if she’d win after being beaten by short margins in a few races, but she was very impressive on Saturday and hopefully we’ll have a lot more fun with her,” a relieved Christian adds. “She was actually going to kick off her campaign in a maiden at Geelong on Friday but trialed so well the decision was made to go to the Quezette instead.

“Ironically, she would have struggled to get a start in the maiden at Geelong because of the number of first starters that contested the race.”

HOOFNOTE: Christian breeds under the Saconi Thoroughbreds banner, which is a tribute to his children: Sasha and Saskia, Coco and Nicky.

“Unfortunately for my youngest, Max, he came along after I’d set it all up, but as long as the horses keep winning, I’m sure he doesn’t mind too much!”