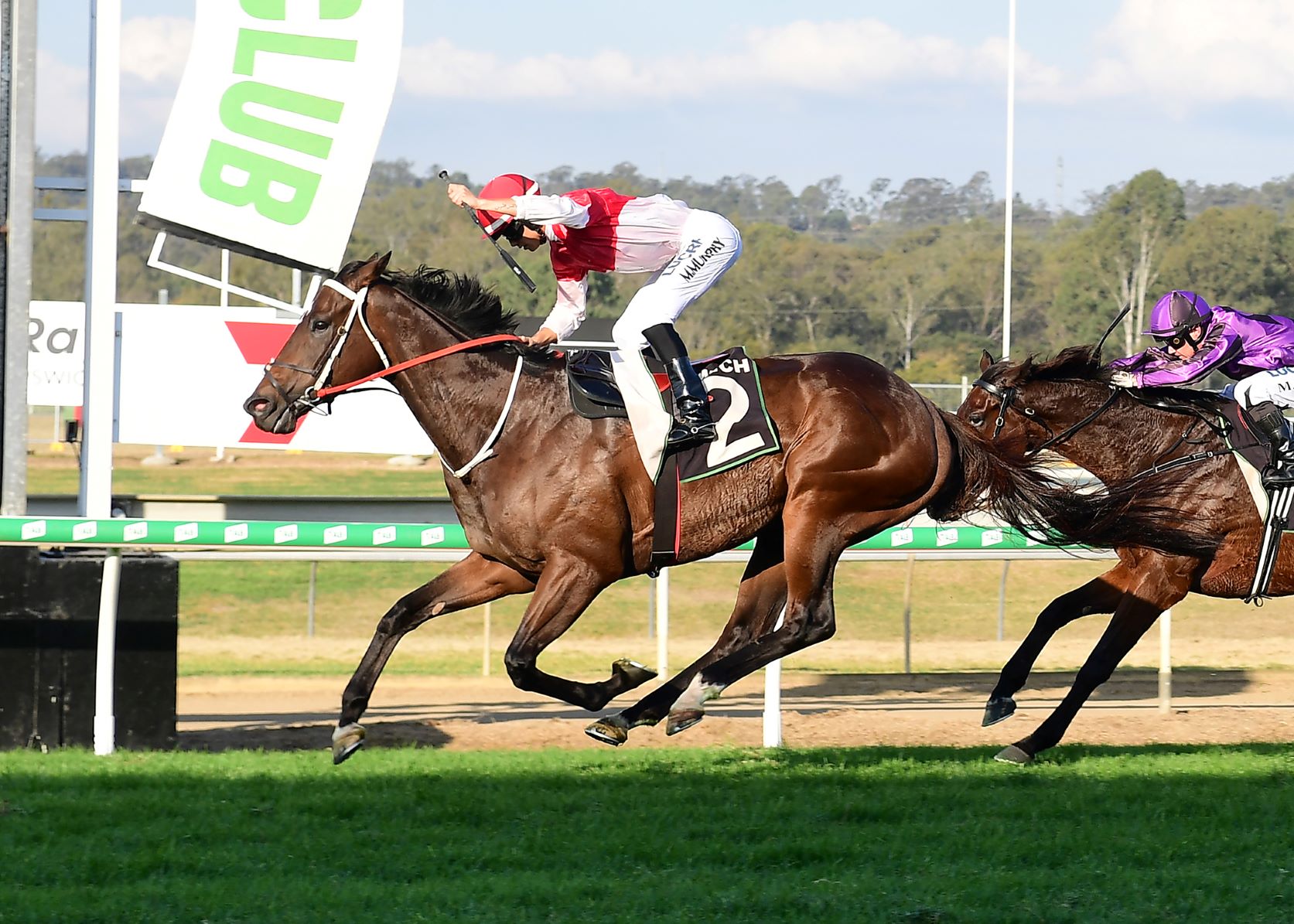 Steve Tregea was more than a little pleased with the winning effort from Bergerac in Saturday’s Listed Channel 7 Ipswich Cup over 2150m.

After all, Tregea bred the horse, owns him and trains him … plus he has the dam (Miss Argyle) and, at one time, had a share in the sire (Drumbeats) as well.

Perhaps making it even more special though is that, like the titular character in the TV series he’s named after, Bergerac has bounced back from adversity.

Tregea had a relatively high opinion of Bergerac from the time he was broken in, but couldn’t work out why he ran so poorly at his first two starts: eighth of 10 and last of nine.

“Turns out he had this big abscess in his throat which caused a real problem with his wind,” Tregea recalls. “He came good after they removed it though.”

He sure did. Bergerac won five of his next seven and, in his first trip south of the border last August, added a Randwick victory to the resume.

However, it would be Bergerac’s win in last December’s Listed Bernborough over 1600m at Doomben that really stamped his class and the 5YO currently has nine wins and seven placings from 29 starts for $565,600 in prizemoney.

Bergerac is the fourth stakes winner bred and raced by Tregea’s Windemere Stud in the last 10 years – which includes multiple black type winner, Niccanova, Love Rocks and Baqaba – but you sense he’s something of a farm/stable favourite.

“Well, he certainly is after Saturday’s win,” Tregea says with a laugh. “I’ve only got a small team, but Bergerac was probably the third stringer in the stable after Nicconova and Prioritise (who finished sixth in Saturday’s Listed Eye Liner Stakes at Ipswich but has won over $440,000 from his 10 victories and multiple black type appearances).

“Bergerac is such a push button horse. Big, rangy type with a lovely nature and always gives 100% in races. His next start could be the ($150,000) Rockhampton Cup in three weeks (dropping back to 1600m), or he might head to the Sunshine Coast in a fortnight. After a win like Saturday’s they can easily get rated out of a lot of races up here. Anyway, he’s won the two stakes races now so he’s really done the job.”

Speaking of jobs, Tregea has been gradually winding back his work load and last year sold the successful agricultural seed business he established in the 1980s.

“We only sell one or two yearlings these days and breed from around 10 mares annually,” Tregea explains from his Windemere Stud, which stretches over approximately 260 acres near Toowoomba in Queensland. “We’ve usually got around a dozen to 16 in work at any given time, while there are eight yearlings and five 2YOs coming through.”

For someone ‘downsizing’, he sounds busy enough!

Bergerac is out of the Iglesia mare, Argyle Miss who was stakes placed at two for Gai Waterhouse and a sister to multiple black type winner Diamondsondinside. Bergerac is also closely related to Group Two Queensland Guineas winner, Express Air.

“She (Miss Argyle) missed last year and her foal the year before died not long after being born, but prior to that she produced nine foals in a row,” Tregea points out. “Her first foal, Cheyenne Warrior was a stakes winner at two in Tasmania before racing in Singapore, while the foal directly after Bergerac – a three quarter brother by Redoute’s Choice – was called Ardrossan and he was a multiple stakes winner and Group One placed. All up, Argyle Miss has had six winners – three at stakes level – from seven to race.”

“Well, the mating brings in Last Tycoon through a daughter and son, but I’d followed Drumbeats pretty closely throughout his racing career (Group Two Shannon Stakes, Group Three Bill Ritchie and Listed Hilton Stakes) and he’s such a great type too,” Tregea adds. “A while back we syndicated the (Group One) Blue Diamond winner, Knowledge, and ended up with quite a few mares including one called Open Question, dam of Arborea and Binding.

“Arborea won a VRC Oaks and One Thousand Guineas (both at Group One level) and ended up being the granddam of Drumbeats, while Binding was bred on farm and went on to win a (Group Two) Sandown Guineas.

“Naturally enough, we’ve kept quite a few mares from that family! Anyway, after Drumbeats retired I purchased a share in him. Turns out to have been a pretty good decision to buy that share.”

The Ipswich Cup victory has worked out well too for Rush Park which only recently secured Drumbeats for stud duties this spring.

A boutique property based near the beach at Moruya on NSW’s south coast, Rush Park is owned by local businessman and trainer, Mike Gatty, who was – not surprisingly – over the moon with Bergerac’s success.

“I purchased Drumbeats in an online auction and he arrived at Rush Park in April,” Gatty reveals. “He’s got terrific breeding being by a champion sire and sire of sires like Redoute’s Choice from an outstanding black type family and I was always a fan when he was racing. Great looking stallion as well.

“Aside from Bergerac, Drumbeats has also produced (Brisbane stakes winner) Tarzan and (stakesplaced) Ringo’s a Rockstar, who has won seven races and over $400,000. All up, his progeny have won close to $6 million and he’s had five winners in just the last week.

“Rush Park will be standing him for $3,300 and I reckon he’ll be the ideal fit for breeders down here.”