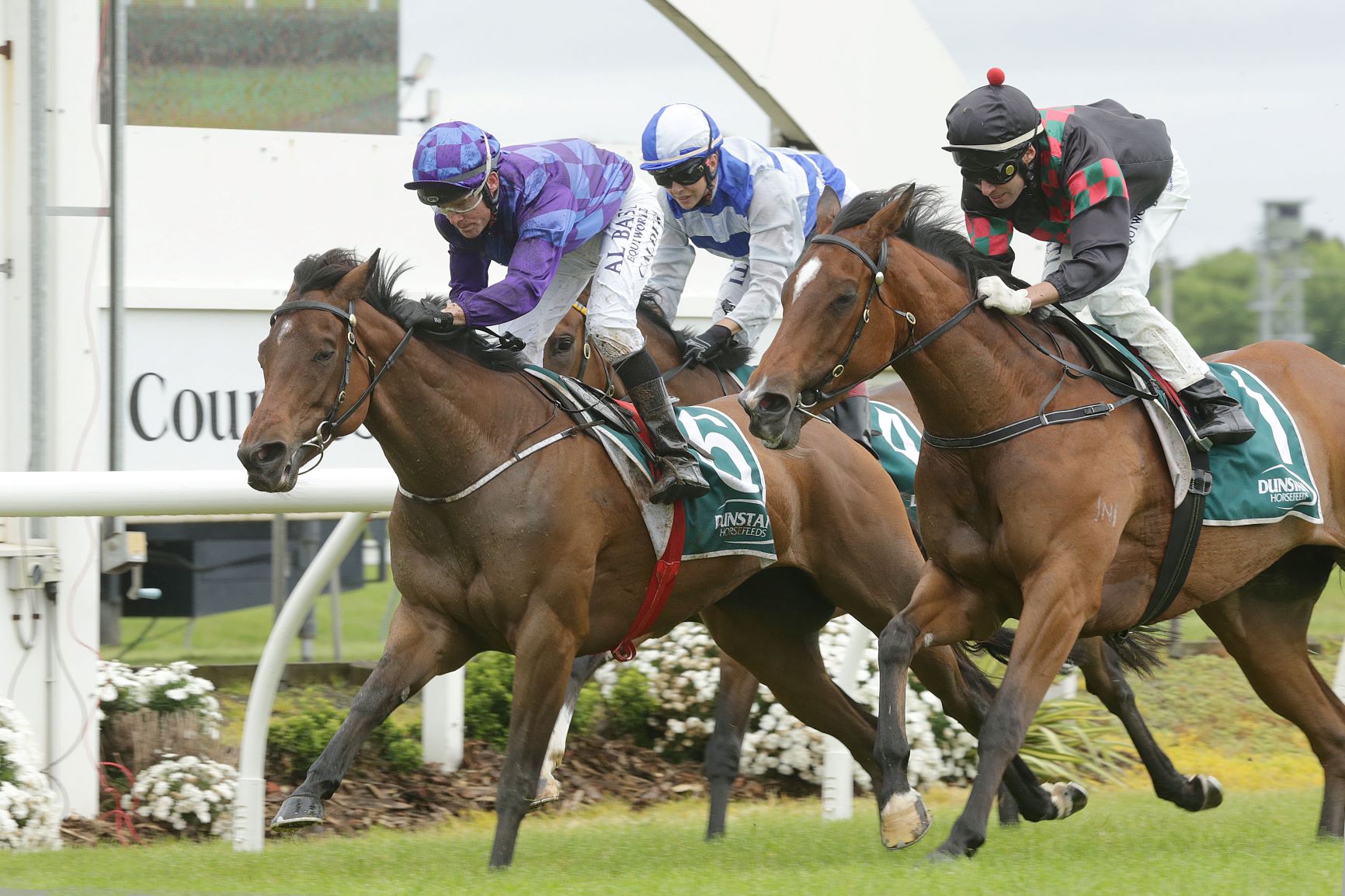 Supreme confidence would be a stretch, but John and Di Bowbyes were at least hopeful that Bisou Bisou – the 7YO mare they bred and race – would acquit herself well in Saturday’s Group Two Auckland Thoroughbred Breeders’ Stakes over 1400m at Pukekohe.

After all, Bisou Bisou (French for ‘kiss kiss’) had won convincingly in Auckland on 6 November, but was facing a smart field at Pukekohe – including another Australian-bred in Volpe Veloce (5 stakes wins including this year’s Group One Railway Stakes), who was sent out a $2.70 favourite.

However, Bisou Bisou would produce an impressive turn of foot to edge out Volpe Veloce by a lip and notch up her first black type success.

“The Group Two win was unexpected but she has been a terrific mare and that was her ninth win overall,” John Bowbyes reveals. “The black type is naturally very important to us breeders. Her half brother, Bruegel is by Excellent Art and he won five races for us, while the dam, Fraise, was also bred and raced by Di and I.

“Bisou Bisou is related to Testa Rossa too and it’s a great family, but it’s a couple of generations back, so the stakes success is welcomed.”

An eye surgeon in New Zealand, Bowbyes has been involved with horses – in one fashion or another – for over 40 years and has half a dozen mares. His wife, Di, was also a public trainer and won the 1995 Lord Mayor’s Cup in Sydney with Slam Dunk.

“We sold Fraise in Australia a few years back and I understand she’s been dropped from the Stud Book, but she produced the winners of 14 races and was a very good mare for us,” Bowbyes adds. “Both Bisou Bisou’s sire, Shaft, and Excellent Art had a reputation for producing lovely types and they both turned out to be a good fit.

“Bisou Bisou is next likely to start in the Group Two Cal Isuzu Stakes over 1600m at Te Rapa on 15 December and fingers crossed she can make it two Group Twos in a row.

“We’ve also got (Group One Easter Handicap winner) Megablast that we bred and race and he was with Darren Weir for a few weeks over the recent Melbourne carnival, running sixth in the (Group Three) Queen Elizabeth. We’re having a lot of fun at the moment.”

A Group Two Silver Slipper winning son of Champion Sire, Flying Spur, from a half sister to Horse of the Year, Typhoon Tracy, Shaft originally stood at Darley before shifting to Hardwicke Stud at Yass and eventually to Bellereve by the start of 2017.

With 92 foals from his first crop, Shaft had a book of just 19 mares last spring and, according to Hansch, has covered around 20 this year.

“There’s been a bit of interest around him since Saturday though,” Hansch points out. “He’s also had a juvenile stakes winner in New Zealand called Magic Shaft, that ran second in the Group One Manawatu Sires’ Produce, while other stakes horses include Perizada, Erin’s Element, Supreme Effort and Selita. What’s more, he’s got around 150 individual winners at an outstanding strike rate of 65%.”

HOOFNOTE: In another remarkable day for Australian-breds ‘across the ditch’ exciting filly, Bavella, maintained her unbeaten record with a crushing victory in the Listed Splice Constructions 2YO Stakes at Pukekohe.

Won by Australian-bred (and subsequent Group One winner) Bounding in 2012, Bavella could be on a similar trajectory after smashing rivals by four lengths over the 1100m journey.

Bred and raced by Cambridge Stud’s new owners, Brendan and Jo Lindsay, Bevella is by Snitzel from the Group winning mare, Zonza, who hails from the family of Champion mare and 10-time Group One winner, Miesque.

Bevella is now likely to head for a spell according to her breeder/owner before targeting some of New Zealand’s autumn jewels.