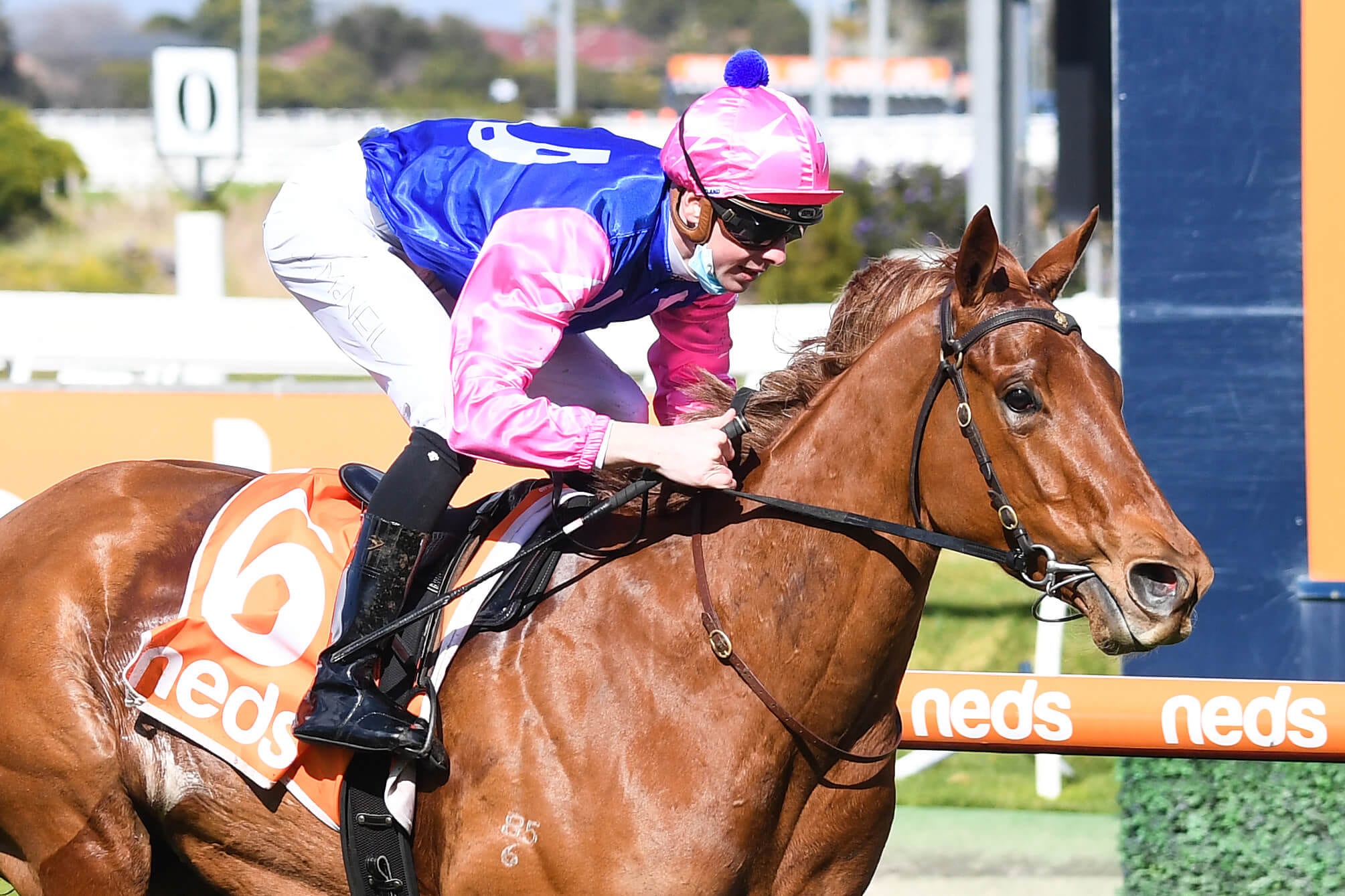 There’s just something about little horses with big hearts.

On Saturday at Caulfield – in the Neds Bet Back Handicap over 1100m – the Shea Eden trained, Bless Her won her fifth on the trot with a blistering display against a strong field of mares, which included Group winner, Embrace Me.

Bless Her is now poised to give Eden a second shot at the Moet & Chandon Cockram Stakes at Caulfield on 29 August, having won the Group Three race with Ocean Embers in 2016.

A Group winner in Tasmania and Listed winner down the Flemington straight, Ocean Embers would later be competitive in the Group Two Schillaci and the Group One Oakleigh Plate behind Shiedel.

“Ocean Embers and Bless Her are similar in many ways – albeit Bless Her is much smaller – but I reckon Bless Her has a better turn of foot,” Eden muses. “If she gets through the Cockram OK, she’s likely to end up with a light weight in a race like the Oakleigh Plate. Pippie won the Oakleigh with only 52kgs on her back this year so that definitely could be an option.

“Anyway, small steps first and we’re just looking forward to the Cockram for the time being.”

Saturday’s Caulfield victory was only the ninth career outing for Bless Her, who first raced at Wangaratta last September and has now accumulated $231,410 in stakes after being purchased for only $40,000 from the Maluka Thoroughbreds draft at the 2018 Inglis Melbourne Premier Yearling Sale.

Bless Her was purchased by Eden’s close mate, Troy Wilson, and it’s fair to say the Cranbourne trainer wasn’t exactly impressed at the time.

“When Troy asked me to go and have a look, I s**t canned the filly to be honest,” Eden says with a laugh. “Troy is only four foot tall himself and I said he’d only bought the horse because she could see over her back.

“Anyway, full credit to him.”

With 25 in work at his stables south east of Melbourne, Eden explains that Bless Her was quite immature, with knee issues, and didn’t push the filly. However, he recognised she had ability from early on.

“Troy and his wife Madeline, and my wife Miranda and I own Bless Her and while she didn’t win at her first campaign, running third, second, fourth and second, it was obvious she could run,” Eden recalls. “Actually, for her first start at Wangaratta, both Troy and I took out second mortgages to back her and she finished up running third. I have to say, that drive home was the longest I’ve ever experienced.”

A tradie based at Pakenham, Troy Wilson has raced horses for 25 years – including a 10% share in last year’s dual Group One winner, Kenedna – but is thrilled at the progress of Bless Her.

“I’ve been fortunate to have some good racehorses over the years,” Wilson points out. “I’ve got shares in horses with a couple of other trainers, but Shea and I have been good friends for around eight years and have a few in work with him.

“Bless Her is pretty special though because we race her together with our wives and winning five in a row really is something else. Hopefully the Cockram makes it six!”

Bless Her, meanwhile, is among 598 winners for Darley’s Street Cry stallion, Street Boss, a Group One winning sprinter in the USA who is also the sire of Group One Newmarket Handicap winner, The Quarterback.

Bless Her’s victory adds to a great start to the racing season for the Godolphin/Darley juggernaut which won Saturday’s Group Two PB Lawrence Stakes at Caulfield with Street Cry mare, Savatiano, the Listed Regal Roller Stakes with Viridine – both racing in the royal blue – while the Group Three Up And Coming Stakes was taken out by exciting 3YO, North Pacific, a colt by and the Darley Victoria resident, Brazen Beau.

Former Godolphin galloper, Aramaayo (a Group winner in NSW) also led home an Australian-bred quinella in Sunday’s Group One Kranji Mile in Singapore. Like Viridine, Aramaayo is by the Dubawi stallion, Poet’s Voice, who stood for five seasons in Australia from 2012 and also produced 2018 Group One Mackinnon Stakes winner, Trap For Fools.

Closely related to Group winner, Red Flair and Listed Hong Kong Derby Trial winner, Hello Pretty, Bless Her was bred by Jim and June Anderson and is out of the unraced Commands mare, Blessit.

Breeders of 4-time stakes winner, Carrara (including the Group Two Bill Stutt Stakes), the Andersons have around 10 mares at their property near Ballarat, but consider Blessit a wise investment.

Blessit was purchased by the Andersons for only $5,000 at the 2012 Inglis Great Southern Sale and, aside from Bless Her, she has also produced 3-time winner Blazing Tycoon.

Blessit’s Dundeel colt would be sold for $120,000 at the 2020 Inglis Melbourne Gold Yearling Sale and, although the mare missed last spring, Anderson reveals that Blessit will return to Street Boss this spring.

HOOFNOTE: Eden is hoping that more than just fast legs and a big motor will be on his side in the 2020 Cockram Stakes: “I won the Cockram with Ocean Embers on my dad’s birthday and two years prior I’d won the Mildura Cup on his birthday too. His birthday is on the Thursday this year and the race on the Saturday, but hopefully we can extend the celebration by a couple of days!”