Bob’s 2YO Has Plenty To Gain 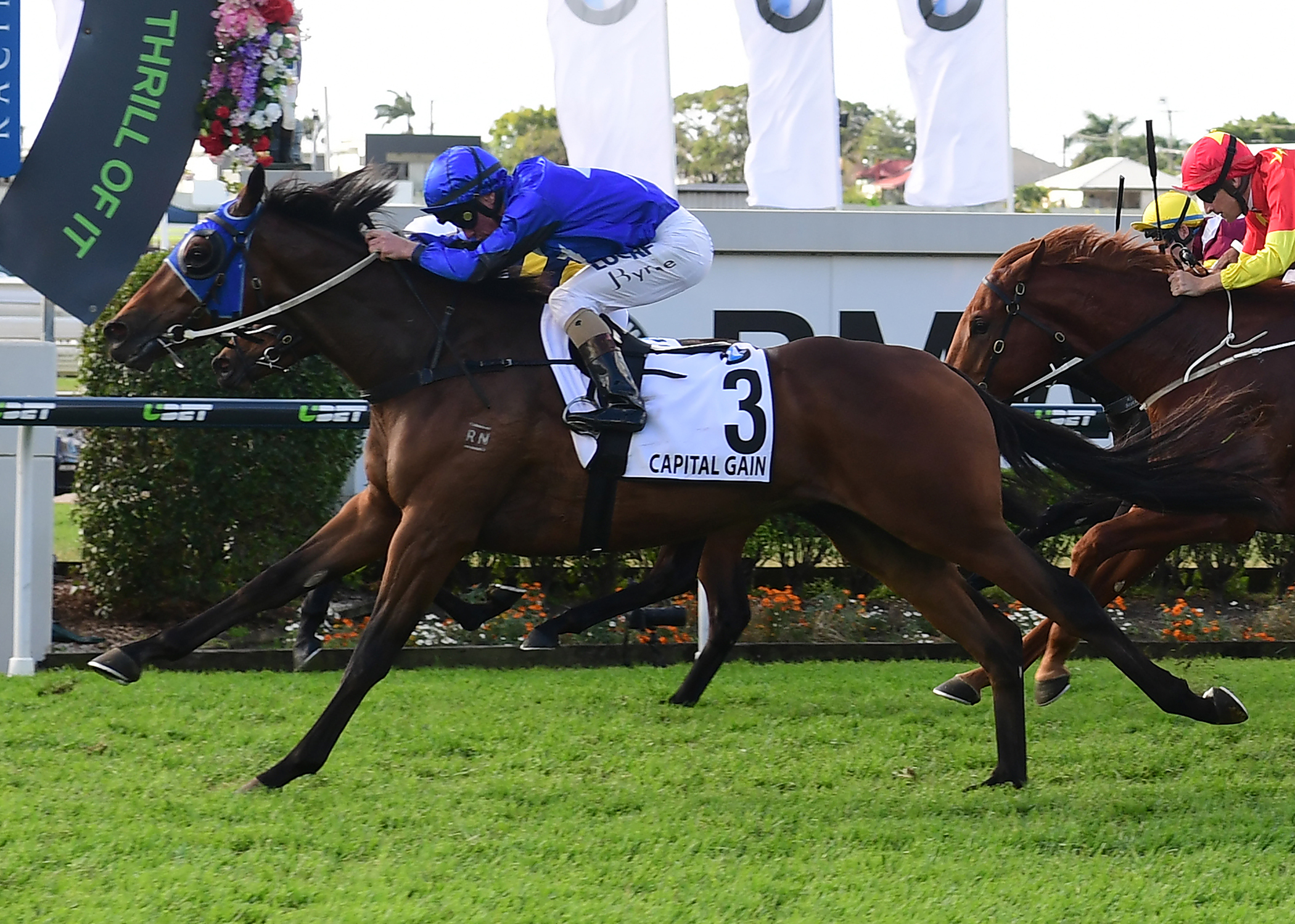 There’s no better feeling than racing a Group One winner and, to prove the point, there were a whole lot of smiles in the crowd on Saturday after Capital Gain produced a withering burst to capture the BMW JJ Atkins over 1600m at Doomben.

Eagle Farm trainer, Paul Butterworth, for instance, had just notched up his initial win at racing’s elite level with a horse that he had picked out the Gold Coast Magic Millions 2YOs in Training Sale eight months ago, paying just $50,000 to take him home. Capital Gain has now won two and placed in three from eight starts for $452,300 in stakes.

But Butterworth wasn’t the only happy camper.

Cue the many proud owners who are now ecstatic for taking a slice of the action via Phar Out Syndications, who had purchased the 2YO in tandem with the trainer.

Perhaps the happiest of the crew though was breeder, Bob Manwaring, who decided – somewhat wisely – to keep a share in the horse.

“I tend to keep a part of most of the horses I sell … hopefully the fast ones,” Manwaring points out. “Capital Gain was originally offered at the Adelaide Magic Millions but passed in for $19,000 and so I decided to try him as a 2YO on the Gold Coast.

“It’s funny how things work out sometimes. I have shares in around 10 horses (including another home-bred in dual stakes winner Grande Rosso) and tried to talk one of my trainers into buying Capital Gain as a yearling. He politely declined and then, up on the Coast, I tried another trainer and got a ‘thanks, but no thanks’ from him as well.

“Paul (Butterworth) really liked him though and eventually purchased the colt for $50,000. We were laughing about it on Saturday night because he said that $51,000 was all they had to spend.

“It turns out the underbidder was from China and, prior to his win in the JJ Atkins, we’d fielded a couple of offers – one from China and another from Singapore – before a substantial offer out of Melbourne last week. After the Atkins, I’m sure there’ll be a few more.

“It’s great for Paul and all the other owners. Paul’s a terrific communicator and said he was toying with the idea of putting blinkers on the horse for his previous start in the (Group Two) Sires’ Produce. It was decided to keep them off for the time being and it turned out to be the right call. The track at Eagle Farm was terrible and I think wearing them (the blinkers) would have really flattened the horse.

“However, with the blinkers on for the JJ Atkins and Jimmy Byrne in the saddle, the horse really showed what he’s capable of.”

Owning a property near Yass in NSW, Manwaring explains that he’s now scaled back to just a few mares, including Grande Rosso’s dam, Jestemma, and Capital Gain’s mum, the Delzao mare, Zuzao.

“I actually bought Zuzao as a weanling and while she wasn’t a very good racehorse, she has Vain in the pedigree and I decided to keep her as a broodmare.

“I’ve given the mare a couple of seasons off but will have her covered again this spring. I chose to send her to Ad Valorem because I like the Danzig over Vain and it’s certainly worked this time.

“I get my mares foaled down and prepared for sale with the Middleton’s Redbank North, which is just near my farm and I’ve told them that following the success of Capital Gain and Grande Rosso this year, they’ll have to start paying me to put their brand on my horses,” Manwaring adds with a laugh. “All jokes aside, they do a fantastic job at Redbank North and, aside from my two, they’ve also either bred or sold Single Gaze, Eckstein, Snitzel Spirit and Mahuta which have all won black type races in the past 12 months or so.”

The joy surrounding Capital Gain’s win wasn’t confined to Doomben racecourse though, with Jock Mackay giving the 2YO plenty of vocal support, from some 750 kilometres away.

Manager of the family owned Cangon Stud Farm in NSW’s Hunter Valley, Mackay is currently laid up with a busted ankle, but reckons Capital Gain’s victory was a huge tonic … particularly as he stands the sire, Ad Valorem.

“This was Ad Valorem’s first Group One winner but he’s really been knocking on the door with a number of his runners, including last year’s (Group Two) Sandown Guineas winner Morton’s Fork,” Mackay explains. “He’ll stand this season at $4,400 (inc. GST) and I reckon he represents great value for those who breed to race and, for that matter, he still regularly gets around $30,000 to $40,000 for his progeny in the sale ring.

“The great thing is that there were three Group One winners at Doomben on Saturday with Impending, whose sire (Lonhro) stands at a fee of $66,000, while my bloke produces a Group One winner off a fee of just $4,400.

“It just goes to show that you can be involved at all different levels in this industry, but still get a result at the top end.”