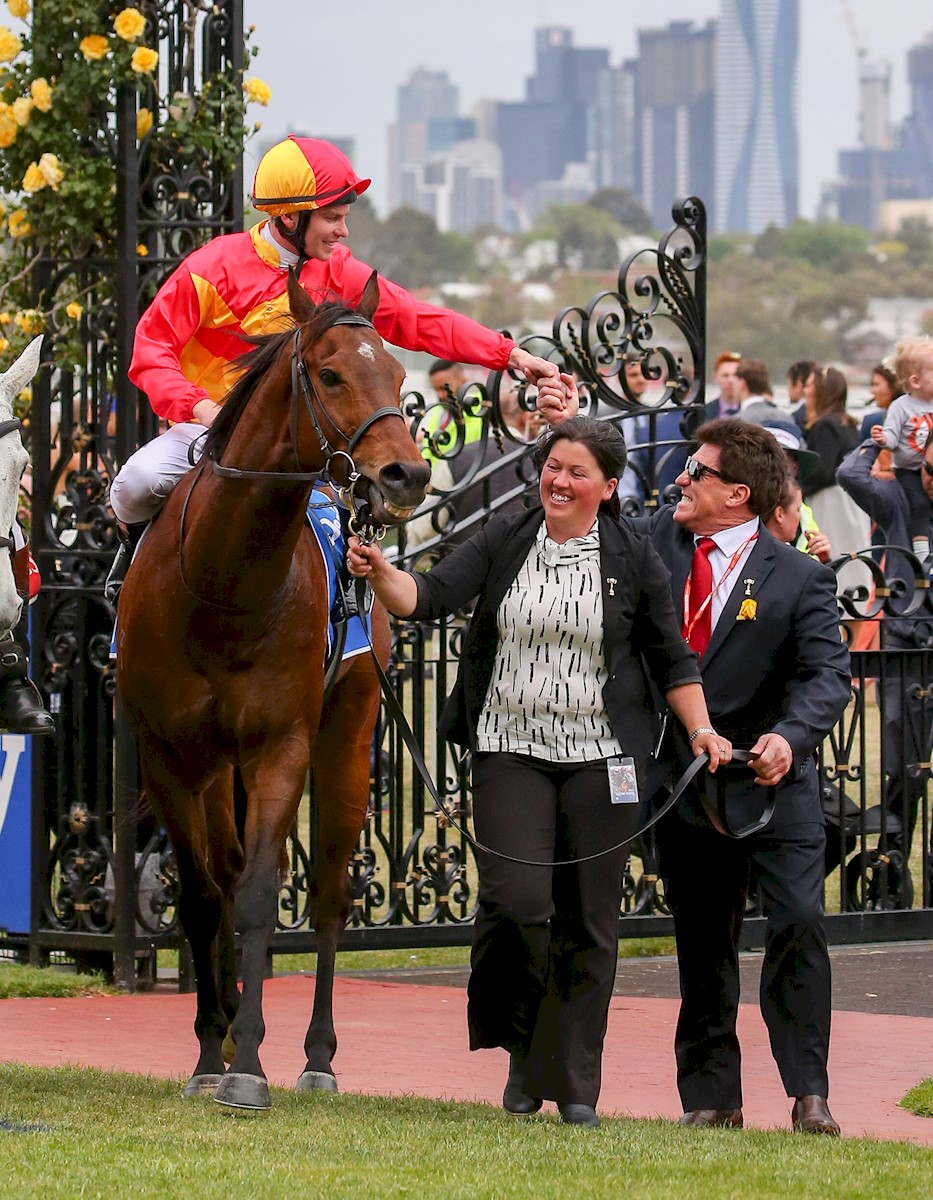 It was a pretty comical rendition of the Macarena at the 2016 Darley Classic presentation. Choreography clearly needed work and a voice coach wouldn’t go astray either.

Still, you have to give a lot of points for enthusiasm and Malaguerra’s owner, Bruno Micalizzi is nothing if not enthusiastic!

Substituting Macarena with Malaguerra, the clearly excited Micalizzi and friends made sure it was a day to remember as they accepted the trophy.

Not that Micalizzi’s likely to forget his trip to Flemington in a hurry: “This is a dream come true … I had butterflies in my stomach for weeks beforehand and to win that race, on that day, was just a dream come true. I haven’t slept since,” Micalizzi pointed out some 24 hours later.

“I was a fisherman by trade and every time we’d pull in a big haul, we’d sing Malaguerra to the tune of Macarena.

“Malaguerra was a Sicilian hero from the Byzantine period and also the name of my boat. What’s more it was my father’s nickname and he was the toughest man I’ve ever known. Huge heart.

“So, when it came to racing my first horse, he got that name and I’ve got to say, he’s tough with plenty of heart too.

“When he (Malaguerra) hit the lead in the Darley Classic, it was spine tingling. I think about all the work from the Gelagotis brothers and planning that’s gone into this and it’s just so special.

“Winning the (Group One) BTC Cup in May with Malaguerra, when trained by the Freedmans, was incredible, but since moving the horse to the Gelagotis stable, they have really embraced me as one of the family.

“I think of all the wonderful people I’ve met in this industry and that just adds to the excitement.

“We’ll see how the horse pulls up but the plan at this stage is to run him in the Winterbottom Stakes in Perth in a fortnight. The horse’s welfare will always come first but Western Australia is my home state and it would be terrific to win another Group One with Malaguerra over there.”

Not surprisingly, Micalizzi has expanded his thoroughbred ‘empire’ to three following Malaguerra’s success and part-owns an unbeaten mare with Bjorn Baker … plus he’s now dipping his toe into the breeding game.

“I purchased a Starspangledbanner mare called Grand Gesture, who is out of a half sister to Malaguerra, and sent her to Malaguerra’s sire, Magnus. And, I’m happy to say, she’s in foal.”

Maybe it won’t be the last time we hear the Macarena at Flemington!

Malaguerra, meanwhile, has taken his earnings to $1.4 million – becoming the third ‘millionaire’ for his Sun Stud Victoria based sire – and has won 11 of 21 career starts, including the dual Group One successes.

Although their celebrations might have paled (marginally) by comparison, there was a fair amount of exuberance from the Gelagotis brothers too when Malaguerra got the nod in the Darley Classic.

Trainer Peter Gelagotis and his brother, Manny, have tasted Group One success previously with Underwood and Australia Stakes winner, Mourinho, but the Malaguerra victory has gone a long way to establishing their bona fides in a highly competitive marketplace.

“We’ve only got about 20 in work at our Moe stable,” Manny points out. “We’ve been going now for around 17 years and having a horse like Malaguerra is great for the stable and the whole team.

“I manage the business side … the administration, communication and the buying and Peter concentrates on training the horses. It works well.”

HOOFNOTE: Malaguerra was piloted by Ben Melham, who etched his name into history as the rider of Black Caviar when she won her first Group One – in the 2010 Darley (then Patinack) Classic.