Buffering…All The Action In Dubai 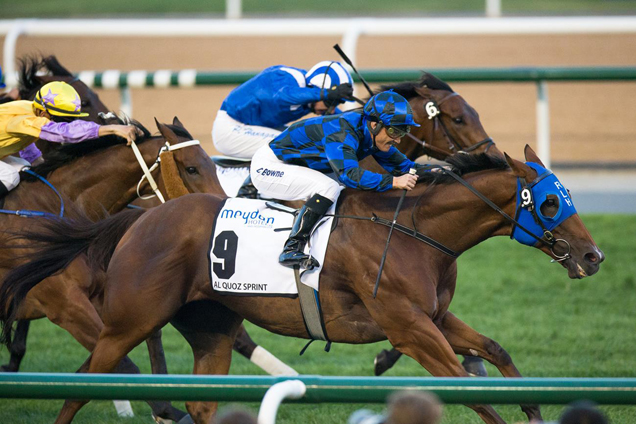 The TV commentator was apologetic as the US$30 million Dubai World Cup program drew to a close. Earlier in the night he had dismissed Buffering’s chances in the Al Quoz Sprint: an assessment based largely on age wearying legs that had previously carried the Aussie star to six Group One victories on home turf.

The commentator did offer a mea culpa of sorts though, declaring that as far as post-race celebrations go, the Buffering camp was in a league of its own.

That said, the sheer joy of Buffering’s victory wasn’t confined to Meydan racecourse and, despite the time difference, many Australians revelled in the performance of a home-grown favourite.

Perhaps none more so than Queensland stud manager, Mark Wooldridge, and avid breeders, Bill and Barb Kajewski, who have a very close association with Buffering.

Wooldridge has been involved with Buffering from the word go … before ‘go’, in fact. As the manager of Racetree Stud (as it was then known), Wooldridge had sat down with owner, Kevin Dixon, as they decided where to send 30 or so mares for the 2006 breeding season.

One of those mares was the maiden winner, Action Annie and it was determined to send her to Vinery Stud in the Hunter Valley to be covered by Mossman.

Wooldridge admits to bias with that choice, given that he was so familiar with the sire. Mossman was bred by and had stood at Peter and Wendy Moran’s Noble Park, the Innisplain, Queensland property which would be later sold to Dixon and become Racetree.

Having been stud manager for the Morans for seven years, Wooldridge stayed on when Dixon took over.

“Buffering was born and raised here (at Innisplain) and we prepped him for the Gold Coast sale in March,” Wooldridge points out. “He wasn’t really a ‘sale type’ though … a fairly plain bay and he was eventually sold to Paul Willetts for $22,000.”

Plain bay or otherwise, that was one wise investment as Buffering has now taken his earnings to well over $7 million following Saturday’s win and, as trainer Rob Heathcote excitedly pointed out: “He could probably race on for a couple more years. That time (56.34 seconds) was the fastest he’s ever run and, who knows, I might get to meet the Queen”, referring to the likelihood his stable star will have a tilt at Royal Ascot.

Bill Kajewski also has cause to be optimistic about the future given that he and his wife, Barb, own Buffering’s dam, Action Annie.

“Barb liked her (Action Annie) so we picked her up at a sale on the Gold Coast, in foal to Greenwood Lake,” Kajewski explains. “She produced a filly which, as it turns out, was a three quarter relation to Buffering, but unfortunately she suffered a paddock accident and had to be put down.

“Action Annie was given a year off and by that time Buffering had won his first four races, so it was decided to send her to Mossman again but unfortunately she missed a couple of times and was later covered by Hidden Dragon (producing a colt).

“After another year off, Eliza Park International had by then taken over at Racetree and we planned on breeding another three quarter relation with Mossman’s son, Love Conquers All. The colt from that mating is a now a two year old and is with no other than Rob Heathcote who claims he’s got a ton of ability.

“Action Annie then went back down to the Hunter Valley and Coolmore Stud, producing a filly by Fastnet Rock which is likely to be sold at next year’s Gold Coast Magic Millions.

“And now she’s in foal to Bel Esprit, sire of Black Caviar …”

Ironically, when talking from Dubai, Heathcote cited Black Caviar as one of the major reasons it took Buffering so long to win his first Group One. So, who knows … a half brother to Buffering by Bel Esprit might just turn out to be the best of all worlds.