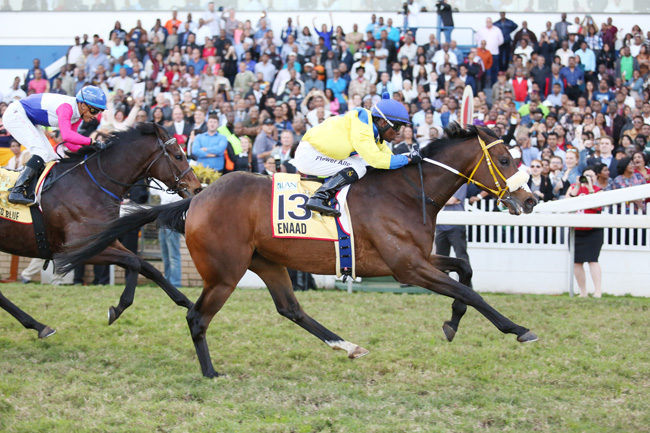 Australian-bred sprinters are renowned around the globe having dominated the Longines IFHA Awards since 2008.

The (Aus) suffix has been voted world’s best for the last 8 years thanks to Sacred Kingdom (2), Black Caviar (4), Lankan Rupee and Able Friend.

Our stayers have been the poor relations compared to those short-course stars and it would take a seismic shift to change the status quo.  Nevertheless, there are signs of a revival.

Mongolian Khan (Holy Roman Emperor) and Enaad (High Chaparral) were both conceived at Coolmore Stud before going their separate ways from the Hunter Valley.

Enaad is a homebred for Sheikh Mohammed bin Khalifa and is half-brother to Coolmore’s new stakes-winning shuttler Pride Of Dubai.

“Enaad had been progressing nicely and I expected him to win,” De Kock said after the Gold Cup.  “When he won the Vase I was a bit concerned because they don’t often do the double.”

Sheikh Mohammed bin Khalifa bought his dam Al Anood (Danehill) as a yearling for $500,000 at the 2005 Gold Coast Magic Millions.  She won at Cheltenham and Caulfield for trainer David Hayes and earned black-type when placed in a Dequettville Stakes at Morphettville.

Her record at stud has been exemplary.  Her first foal to race Al Aneed (More Than Ready) won the Listed Gothic Stakes at Caulfield and he was followed by Enaad and Pride Of Dubai.

Al Anood foaled a Medaglia D’Oro filly last year and was exported to England in February.

Pride Of Dubai (Street Cry) will follow his dam to the northern hemisphere after completing his first southern book at Coolmore Stud this spring.  He retired as the only colt in history to double up in the Group 1 Blue Diamond Stakes and Group 1 Sydney Sires’ Produce Stakes and will reverse shuttle to Coolmore’s Tipperary headquarters in 2017.

“He’s an exceptionally good-looking horse and I can see him proving extremely popular with breeders here,” Coolmore’s Irish Director of Sales David O’Loughlin said.  “He’s out of a close relative to Invincible Spirit and Kodiac who both sired major winners over the minimum trip at Royal Ascot this year.”

For his part, Enaad provides a growing stamina influence within the family.

“Enaad is a top horse and there’s still more to come,” De Kock predicted.  “I don’t think he’s reached his mark yet!”