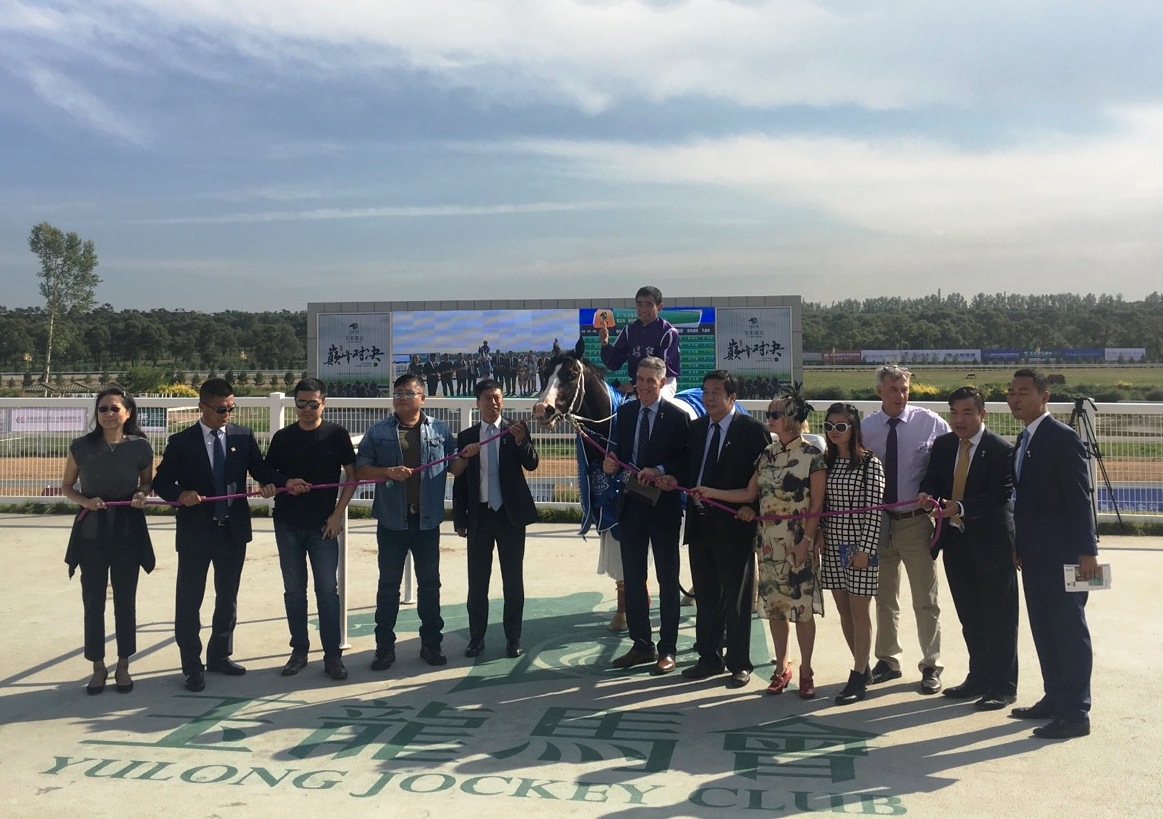 While much of the action centred around Caulfield (first Group One of the season) and Royal Randwick (Winx!) on Saturday, the running of the Inglis China-Australia Cup at Yulong racecourse in Shanxi province was also big news: to Chinese and Australians alike.

Attracting a full field of 14 runners – all sourced from Inglis sales and including runners by Redoute’s Choice, Snitzel, Exceed And Excel, Medaglia d’Oro and co. – the China-Australia Cup is, at A$200,000, the richest race in mainland China and an ideal barometer as to the rapid growth of racing in the region.

Racing was banned in China in 1949, but its ‘return’ has been much anticipated for the past couple of decades … always considered to be something of a sleeping giant.

However, while it took a while to go from an easy canter to full blown gallop, the Chinese industry now appears ready to explode and the steady influx of Australian-bred horses was in full evidence on Saturday.

So too were the number of Aussie faces in the crowd, including Aushorse Chairman and Widden Stud principal, Antony Thompson.

“I was here last year for the inaugural running of the Inglis China-Australia Cup and the difference in just 12 months is simply stunning,” Thompson enthused. “Mr Zhang, who built and owns Yulong racecourse and has substantial racing and breeding interests in both China and Australia, is clearly passionate about building interest in the sport in China.

“There are six races per program at Yulong over an eight week period with a minimum $10,000 per race, including races for local breds, open races, bonus races etcetera, and then obviously building to races like the $200,000 Cup.

“As for the facilities, they are all first class with, for instance, a 500 horse, state-of-the-art stable added in the last 12 months.

“Mr Zhang has been very inclusive and a lot of Australian professionals have been in China for the last few weeks to mix with the local trainers, jockeys and other personnel.

“I must say, the standard of racing is very encouraging too: horses, trainers and jockeys.

“The actual Cup was a terrific event with the race being won by a Purrealist 3YO called Striking Eagle, who is trained by ex-pat Aussie, Brian Lawrence.”

A former high school teacher and hobby trotting trainer in Western NSW, Lawrence trained in China from 2003 to 2005 and returned in March of this year where he has around 16 in work.

“There’s been a huge difference in the last 12 years,” Lawrence explains. “In particular, the standard of horses. There are 16 barns here at Yulong and all of them are full, with Mr Zhang himself having over 100 in training.

“Aside from the quality of bloodstock, the skills of trainers, jockeys and other racecourse staff has improved out of sight as well. I’d imagine that half the trainers here are ex-jockeys that have come up through the ranks.

“It’s really going ahead in leaps and bounds.”

James O’Brien of Lauriston Thoroughbreds was also chuffed at the result given that he sold Striking Eagle to the Beijing Racing Stables at last year’s Inglis Ready2Race for $55,000.

“It was one of four we sold to Beijing Racing Stables from that draft,” O’Brien explains. “Striking Eagle is by Purrealist from Shaolin Belle … he’s closely related to Apache Cat and like Apache Cat, he has a big, white blaze too.

“He’s now won four from four in China and is best 3YO up there. I’m very happy for his new owners.”