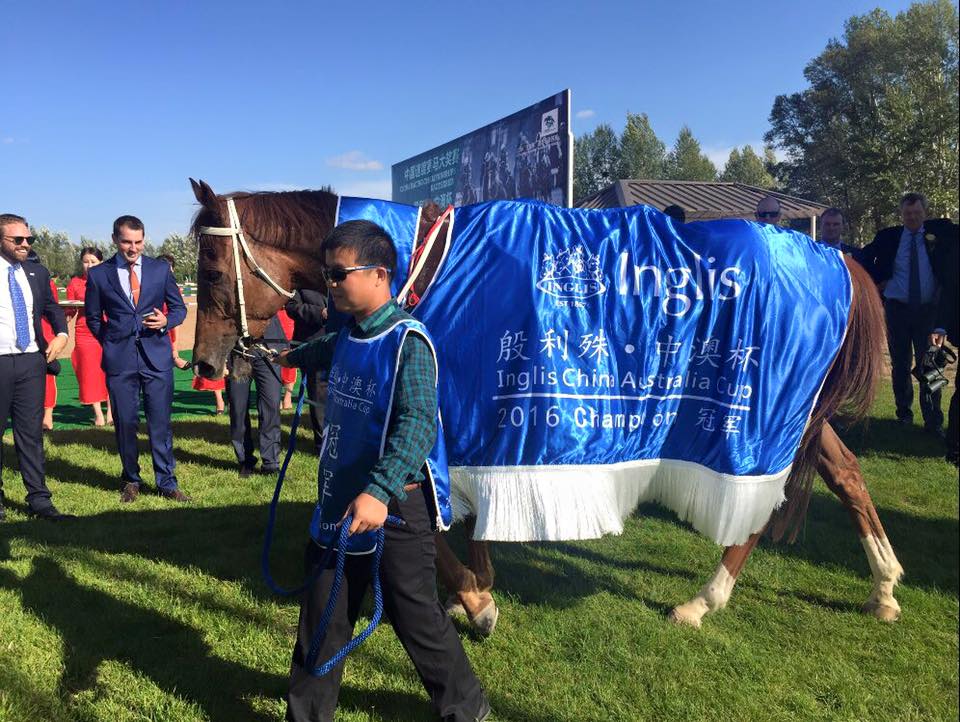 They rolled out the red carpet … both literally and metaphorically. We can all get a little blasé about horse racing when you have the ability to attend meetings on all but two days a year, however for the people of Shanxi province in mainland China, the ¥1,000,000 Inglis China-Australia Cup on Saturday was a very big deal.

The passion for racing in China is clearly evident and the large crowd cheered on as Australian-bred, Club Star, defeated compatriot, Chiaramonte … both of whom were previously multiple winners in Australia and now race for YuLong racecourse’s owner, Mr Zhang Yuesheng.

Mr Zhang has become a formidable presence both in China and on the world stage. A prominent businessman in Shanxi with interests in coal, electricity generation, construction and chemicals, Mr Zhang has established breeding interests in Australia – with a property in Victoria – and a farm in China as part of his YuLong horse park where the races were held on Saturday. Indeed, the China-Australia Cup runner-up, Chiaramonte is an entire by Redoute’s Choice and Mr Zhang will ultimately stand him at stud in China.

A perfect illustration of Mr Zhang’s global racing interests was that aside from the quinella in the feature race at his own course on Saturday, he is also the owner of Killarney Kid who won the last at Mooneee Valley, and of the exciting Exceed And Excel 2YO, Callender, that scored another victory in Ireland later that night.

Well known to vendors in both hemispheres, Mr Zhang – via his Australian agent, Sheamus Mills – recently purchased several mares at the Tattersalls July Sale in the United Kingdom and in Australia, over the past two years, has outlaid some $6 million on 50 yearlings and broodmares.

I Am Invincible is a particular favourite, purchasing nine of his yearlings at the 2016 Australian Easter Yearling Sale.

Inglis Managing Director, Mark Webster, was one of several Aussie patrons at the YuLong racecourse and was delighted with the level of interest in both the meeting and the Inglis China-Australia Cup: “At ¥1,000,000 (approx $A200,000), this is the richest race in China and there was some excellent competition,” Webster pointed out. “It was a very well run event, with Australian bred horses dominating the day and we’re very proud to have been associated with this event.

“The Chinese racing market continues to evolve at a rapid rate and we’re thrilled to be long-time partners.”

Aushorse CEO, Tom Reilly – along with Darren Weir, David and Pru Hayes, Antony Thompson, Harry Mitchell, Justin Fong, David Chester and Sheamus Mills – also travelled to China for the race and was really taken by the level of interest from Chinese fans: “It was wonderful to be part of such an important weekend in the growth of Chinese racing, as Mr Zhang’s guest.

“He has built a first-class equine facility in Youyu and has ambitions to develop racing in this part of China to a new level. Everybody who came to the meeting will have been impressed by Mr Zhang’s passion for the sport and love of horses.

“I’m sure he will be a leader, not just in Chinese racing, but in racing across the globe for many years to come.

“Investment from mainland China continues to grow and with more and more events like Sunday’s racing at YuLong, it can only help firm up the relationship between the two countries.”