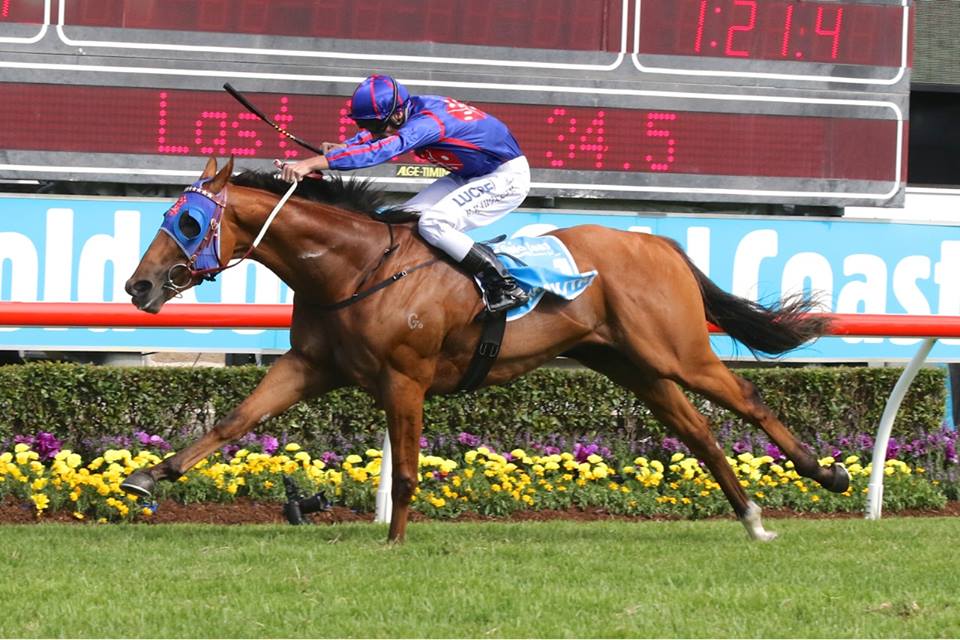 The results of Saturday’s $10 million Magic Millions day at the Gold Coast further highlighted that many trainers are now aiming their top class runners at the race day.

Having never had a starter at the meeting before, trainer Darren Weir sent two runners to the Magic Millions race day, with both securing their respective races, further highlighting the ability of the Melbourne Cup-winning trainer who is extremely astute when it comes to placing his horses.

-year-old Mahuta, a last start winner of the Group 2 Sandown Guineas was too good in the Magic Millions 3YO Guineas.

Ridden by Glen Boss in the Magic Millions Cup, Lucky Hussler (pictured right) was asked to carry 61kg, but in the end his class simply shone through as the $100,000 graduate from Monarch Stud’s draft powered away to win by a length and a half.

“He performed like a Group 1 horse today and so did the jockey,” stated Weir.

“He got a beautiful run midfield on the fence, it was a cool ride and the horse ran terrific.”

Boss heaped praise on the galloper that has carried him to Group 1 wins in the Toorak Handicap and William Reid Stakes in Melbourne.

“I’ve got so much fondness for this horse because even when he’s not 100% he just gives his all,” Boss said.

“He has carried a big weight today and it felt like we were running time but he is a proper Group 1 horse.”

Weir’s other success on the day was Flying Spur colt Mahuta, who progressed from a maiden win at Kyneton in October to capture three stakes races during the Spring Carnival.

Spending time at Weir’s Warrnambool stable to prepare for this Magic Millions trip, jockey Brad Rawiler jumped Mahuta from the second outside barrier and went forward to race handy.

Surging clear not long after the turn, Mahuta took his overall record to five wins from seven starts and over $1.5 in earnings, not a bad effort at all for $35,000 Adelaide Magic Millions yearling sale graduate from the draft of Redbank North.

It was a great result for consignor Jamie Middleton’s Redbank North, who also prepared the runner up in the race Single Gaze (Not A Single Doubt), whose second place prizemoney collect took her earnings past $700,000 for trainer Nick Olive who parted ways with $70,000 to secure the filly as a yearling.

A six-time Group 1 winner, Buffering’s victory saw the son of Mossman smash through the $6 million mark, with the eight-year-old sitting behind Black Caviar and Takeover Target as the third highest prizemoney earner for an Australian sprinter.

Set to now be readied for a trip to Dubai for the Group 1 Al Quoz Sprint, trainer Robert Heathcote has recently revealed that if all goes well in Dubai that Buffering may head back to via Hong Kong to contest the Group 1 Chairman’s Prize Sprint at Sha Tin on May 1.

Added to the Global Sprint Challenge for 2016, the Chairman’s Prize Sprint carriers a $1 million purse to the winner.

“After Dubai he can’t come back directly to Australia,” Heathcote said.

“We can go to England but fortunately in Hong Kong they’ve got the Champion Sprint which is a Group 1 over 1200 metres and its four weeks after Dubai.”

“Dubai and Hong Kong and then back for a spell and then down to Melbourne and Perth and back here again this time next year, why not,” Heathcote said.

“I just get enormous pride from him, the dream lives in racing.”

“The sales are on at the moment and they’ve been ever so popular and the dream is there because this horse cost $22,000 so if you want to get into the game and share some of this, get into a racehorse.”

Buffering was a $22,000 from the Racetree draft at the 2009 Magic Millions Gold Coast March Yearling Sale by Paul Willetts.

The three winners were collectively purchased for $155,000 at the Magic Millions and between them; they have earned their connections in excess of $9.81 million.