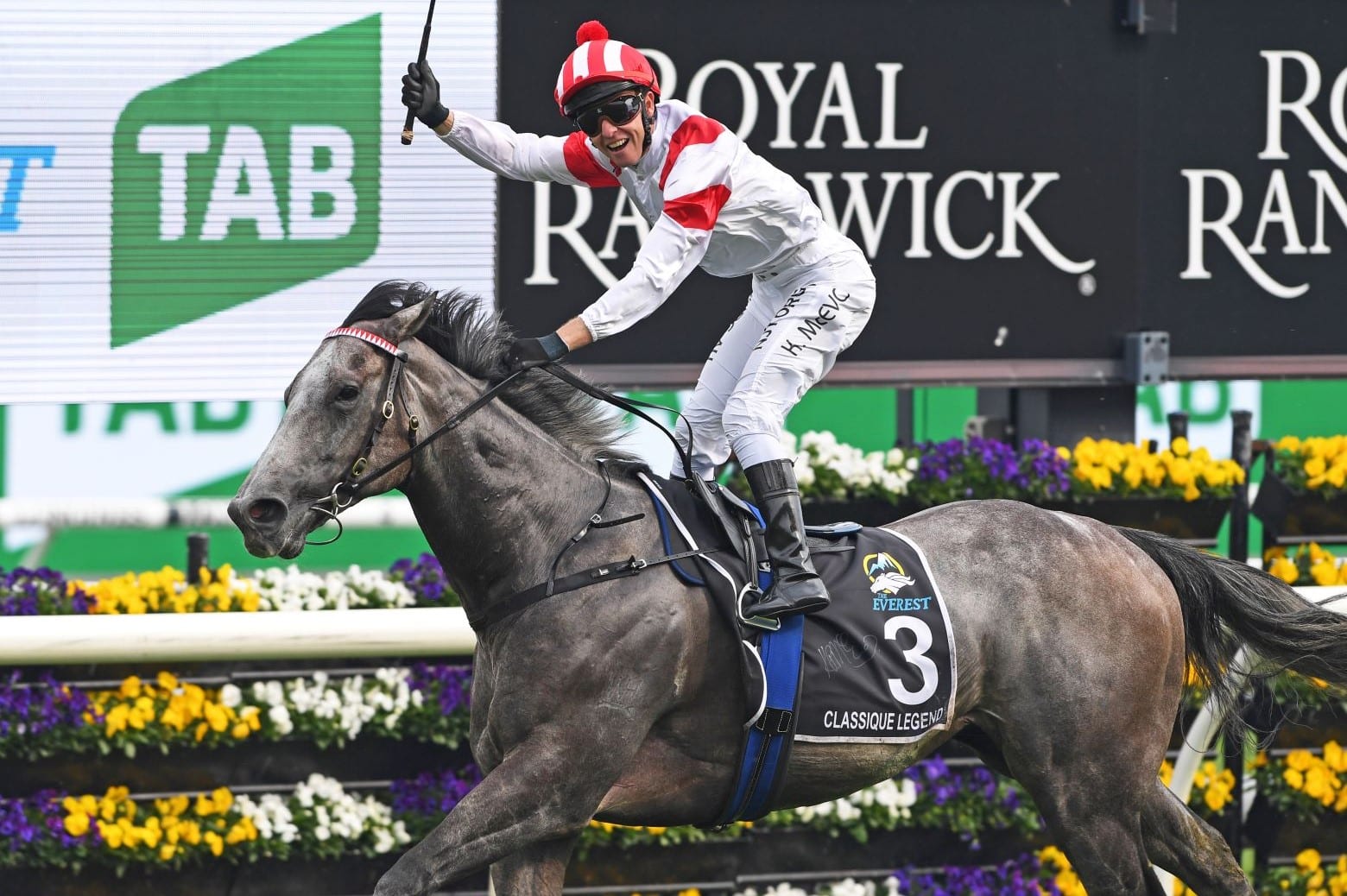 For Classique Legend’s owner, Bon Ho, the decision to bring his $15 million The Everest winner to Hong Kong was a simple one.

Having entered quarantine on Monday, the next stop for Classique Legend will be the HK$22 million (A$4 million) Hong Kong Sprint at Sha Tin on 13 December.

“I would love to win the International Sprint at Sha Tin in front of all my family and close friends,” Mr Ho enthused. “That’s why I’m bringing him to Hong Kong where I can be nearer to the horse. I just want those close to me to be able to share in the thrill of racing such a wonderful racehorse.

“I’m not really in a position to jump on a plane and come and watch him race in Australia. As exciting as it was, I watched The Everest live streamed on my laptop.

“I want to make it very clear though it had nothing to do with how they’ve handled the horse. They’ve done a marvellous job with Classique Legend, but I’ve been wanting to bring the horse to Hong Kong for 18 months.

“The horse was ready to come here several times but for one reason or another he stayed. Although it will be difficult for me to get another one as good as Classique Legend, I’ve got a dozen other horses with Mr Bridge and he tells me that a couple of them are showing real promise.”

Bridge was also the original trainer for another of Mr Ho’s flag bearers in Southern Legend, who raced nine times in Australia (for four wins, including the Listed Darby Munro) before shifting to the stables of Caspar Fownes in Hong Kong.

Winner of the Group 1 Champion’s Mile and five other races in Hong Kong, Southern Legend successfully campaigned twice in Singapore – winning the Group 1 Kranji Mile in 2018 and 2019 – and also competed in Dubai, running in the Group 1 Meydan Dubai Turf.

It was certainly an outstanding weekend for Mr Ho, as the now 8YO, Southern Legend, ran a brilliant third behind Australian-bred sensation, Golden Sixty, in the Group 2 Sha Tin Trophy on Sunday.

“We are strongly considering Tokyo and Dubai but a run at Royal Ascot would depend on a number of factors … all I know though is that my European agent told me on Saturday that Classique Legend would be too good for any of the current sprinters in Europe.”

An accountant by trade and later a partner with Ernst & Young, Mr Ho is a major property developer in China, but “my favourite business is racing horses”.

“My first horse was from Ireland and that was over 30 years ago,” Mr Ho reveals. “I raced a very good Fastnet Rock called Sichuan Success, who is now happily living out his days at Jazcom Farm in NSW. He won six from 16 and was a Group winner, but until Classique Legend came long, my best has been Southern Legend.

“Southern Legend is an 8YO and Classic Legend is five and while it’s obviously wonderful to win a race like The Everest, people should be aware that not every horse you buy is going to win you a good race,” Mr Ho adds with a laugh. “There’s been a few slow ones too. My luck has certainly changed with Classique Legend.”

Mr Ho is clearly enamored with the Aussie galloper though and, according to the Hong Kong Jockey Club, has raced 13 horses in Hong Kong since 2007 – 11 of them Australian-bred.

“Because of the pattern of racing in Hong Kong, most of the races are from 1200m to 1600m … very few over 2000m,” Mr Ho points out. “That’s why I like Australian-bred horses because not only are they suited to sprint racing, the weather is very similar and they tend to acclimatise much more quickly. They also mature much sooner compared to say horses out of Europe or Ireland.

“I well remember the deeds of sprinters like Silent Witness who won his first 17 races in Hong Kong for Tony Cruz and my trainers in Hong Kong invariably buy their horses out of Australia.”

While a defence of his Everest crown is definitely on the agenda – “I don’t think I’ll have a better sprinter than Classique Legend in the next 12 months” – Australian racing fans won’t have to wait long until they next see Mr Ho’s increasingly familiar red and white silks.

Mr Ho has been a massive investor in Australian bloodstock in recent years, spending over $10 million on yearlings alone in 2020.

“I have approximately 45 horses in Australia but about 30 of those would be 2YOs and 3YOs just coming through,” Mr Ho adds. “I didn’t spend that much in 2019 (albeit paying $1,050,000 for a Not A Single Doubt colt at Inglis Easter), but took advantage of the depressed market this year by purchasing quite a few (including $1,100,000 for a So You Think colt at Easter).

“I’m hearing some encouraging reports from trainers about the progress of my Australian horses. A couple of them, I’m told, have Group potential.

“So, while it’s very exciting to have Classique Legend coming to Hong Kong where I can see him race in person, I’ve hopefully got a lot to look forward to in Australia over the next few months.”