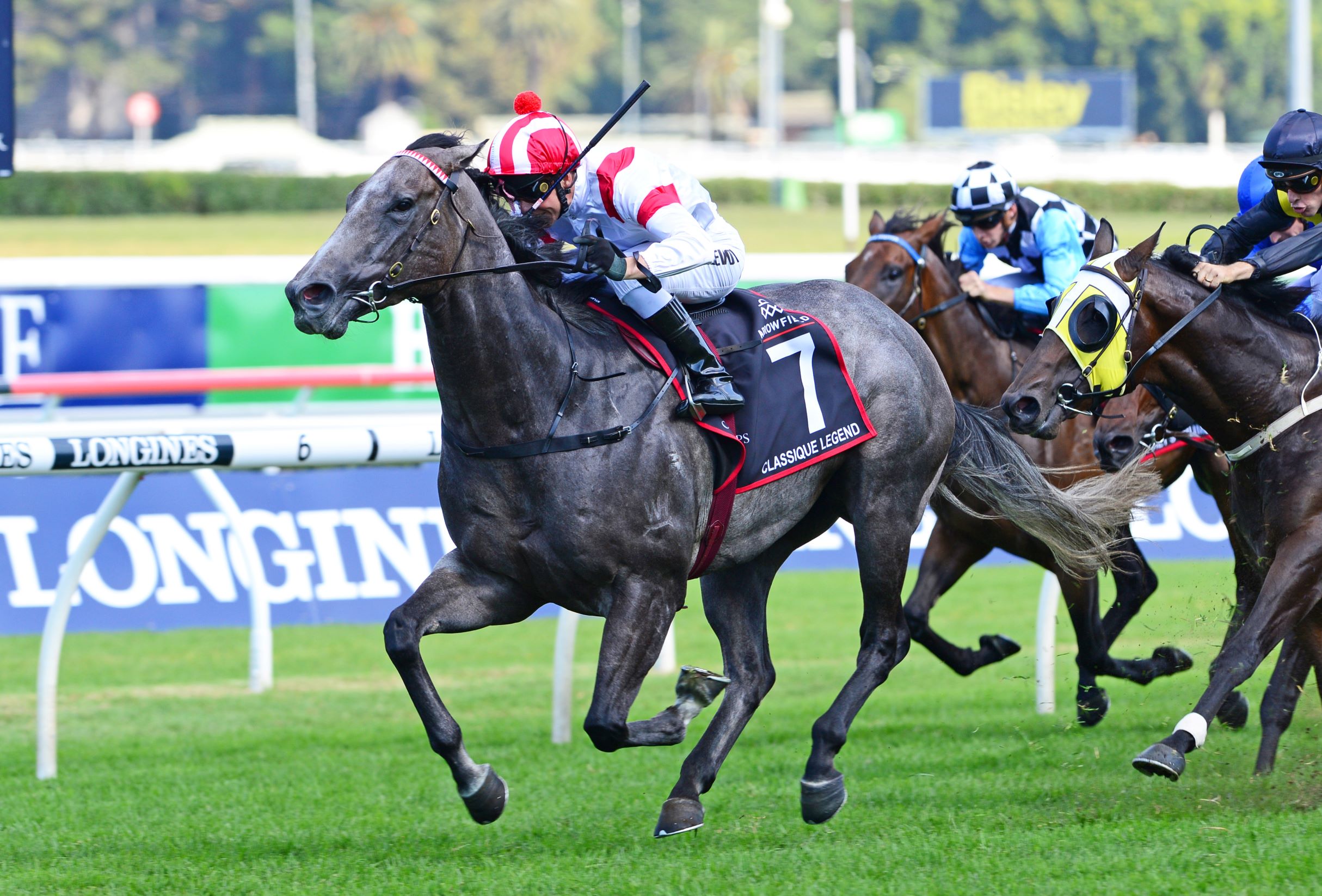 A little over two years ago, Tyreel Stud took a smashing grey colt to the Inglis Sydney Classic Yearling Sale where he would be knocked down to Carmel Size – on behalf of Hong Kong owner Mr Bon Ho – for $400,000. Topped the sale he did.

This was welcome news for Tyreel. Sure, the Hawkesbury Valley showpiece had been synonymous with big sales and even bigger race wins since the 1980s when under the ownership of the Fleming family, but Tyreel was now under new management following the farm’s purchase by Linda and Laurence Monds in 2014.

So, topping the Classic sale was a big effort from the Monds as this colt was, effectively, from their second crop of yearlings … sourced from relatively few mares.

On Saturday that flashy grey, called Classique Legend, won the Group Two Arrowfield 3YO Sprint at Royal Randwick in brilliant fashion and a happy-ever-after ending is predicted for the exciting youngster. He is clearly some racehorse: four starts, three wins.

That Group Two win alone would be – for most of us – enough for the ‘pool room’, but it turned out to be a monumental week for the Monds as Tyreel also sold its first seven figure yearling when an Exceed And Excel colt from Group winner, Written Dash was knocked down for $1.7 million at the 2019 Inglis Australian Easter Yearling Sale. Word is you could see Linda’s smile from the moon’s surface.

It’s a long way to come in a few short years, but Monds herself has industry history: “I was involved with horses from a very early age,” Linda Monds explains. “My parents – David and Helen Wallings – had a cattle property where they bred, sold and raced a number of horses, while I also spent time working in and around the stables and took a keen interest up until the time I was in my early 20s.

“I then established a career in office/business management but had always kept my passion for horses and, a few years back, Laurence and I were in a position to get back into breeding and racing.

“I must say the industry is really moving forward and is much more professional than it was back then.”

More profitable too it seems. Classique Legend’s dam, Pinocchio – a sister to Champion 3YO Racing To Win and half sister to Group winner Purrealist – was purchased on behalf of Tyreel for $320,000 at the 2014 Magic Millions National Broodmare Sale.

Pinocchio’s first foal, Puppet Master has won four races for Gary Portelli and Darby Racing, her second is Classique Legend and the third, a Sebring colt, was sold to Hong Kong based, George Moore, for $575,000 at Easter last year.

On Sunday, the Sebring 2YO – Aethero – won his first start at Sha Tin and, post-race, Moore was already drawing comparisons to former Hong Kong Champion and Horse of the Year, Able Friend.

We did say it was a big week!

“A couple of weeks before Easter, George Moore came out to the farm to look at the yearlings and he was telling me then that the Sebring (Aethero) was going to be a very good racehorse,” Monds reveals. “Unfortunately Pinocchio didn’t get in foal last year but she has an absolutely cracking So You Think colt that we’ll be taking to the sale next year.”

You can rest assured that Carmel Size will be keen to have a look.

“He (Classique Legend) was an incredible type and I reckon I was lucky to get him for $400,000. Really, I would have just kept on bidding,” claims Size, who is the racing manager for Mr Ho.

Size, who spent many years in Hong Kong, purchased Southern Legend on behalf of Ho at Easter ’14, with the horse capturing a Listed race in Sydney before going on to race in Hong Kong (multiple Group One placed), in Singapore (winning the Kranji Mile) and, raced on last month’s Dubai World Cup card. With nine wins and eight placings, Southern Legend has banked around $3.8 million in stakes.

A daughter of Hall of Fame trainer, Neville Begg, Size works exclusively for Ho and purchased three yearlings for $1,990,00 on his behalf at Easter last week. With the majority of the stable only 2YOs, there are some 22 horses “on the books”.

“Classique Legend’s stable name is Jiminy Cricket and I reckon they could have heard me yelling “Jiminy” from miles away when he worked last week … he was like a low flying rocket and, so, I was very confident coming into Saturday,” Size points out. “It was a good thing too because Mr Ho was at Randwick for the big day.

“This horse has done incredibly well on the back of a single preparation. He did a ligament early so he came into this campaign on the back of one jump out and a barrier trial at Hawkesbury.

“Kerrin McEvoy rode him at work early in the piece and said to me that ‘wherever this horse goes, I go too’ and even went out to Hawkesbury to ride him in the trial.”

Based on Saturday’s performance, it’s not likely McEvoy will be jumping off anytime soon.

Following the Group Two victory there was much speculation as to whether Classique Legend would be sent to Hong Kong, but Size explains that the horse’s future is “still under discussion”.

“He could end up in Hong Kong but there is a lot of interest regarding the Everest so it’s really up in the air at the moment,” Size adds. “Mr Ho was at Randwick on Saturday, saw his horse win and couldn’t believe the atmosphere … he was very impressed.

“What a great day … Winx and Classique Legend. I’ve got the best job in the world!”